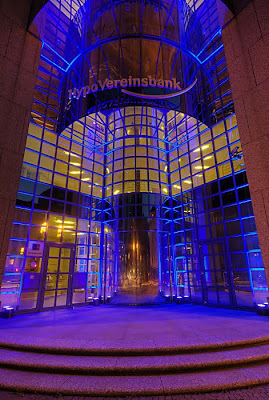 How do you spell o-s-t-e-n-t-a-t-i-o-n? Perhaps something a bit simpler would do; such as PRIDE? On the positive side, at least the colors are nice! Today, banks should not be too prideful; except perhaps in their ability to wield enough political clout to manage a massive bail out (or was that payback?). Whatever you call it, the attitude of self-aggrandizement seldom has a positive outcome. Take this prime example from the book of Acts.


Acts 12:20-23 WEB (R)
(20) Now Herod was very angry with the people of Tyre and Sidon. They came with one accord to him, and, having made Blastus, the king's personal aide, their friend, they asked for peace, because their country depended on the king's country for food.
(21) On an appointed day, Herod dressed himself in royal clothing, sat on the throne, and gave a speech to them.
(22) The people shouted, "The voice of a god, and not of a man!"
(23) Immediately an angel of the Lord struck him, because he didn't give God the glory, and he was eaten by worms and died.


Herod was a typical eastern potentate; filled with his own importance and ready for a fall. In his case an angel did the trick, but it was inevitable that Herod was going to end badly! Why? Because of his pride and arrogance. You can bank on it!!!
Email ThisBlogThis!Share to TwitterShare to FacebookShare to Pinterest

What's it worth to you? 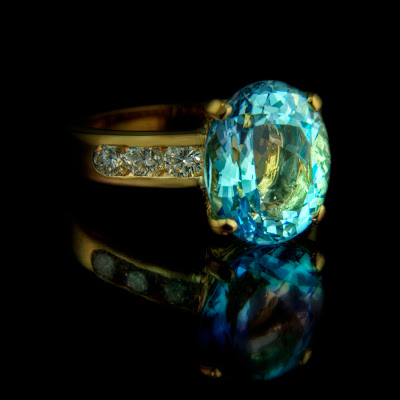 This Aquamarine and diamond engagement ring is a beauty; it must be quite expensive! Its a far cry from the ring I gave my fiancee; you could hardly see the stone! She loved it though. For our 25TH anniversary I gave her a new one that had a diamond that our oldest daughter spent the better part of a day choosing from a diamond merchant. To this day I am so proud of what she did for us and I never would have obtained such a nice stone (although still somewhat small) without her help. I have to ask myself, though, was I any better at my 25TH anniversary than our first? Sure I had a few more dollars and had raised three children (my wife deserves all the credit) but fundamentally, I WAS THE SAME! What difference does it make if you are poor or rich, young or old? For many people, the answer is A GREAT DEAL; and that would be the WRONG answer! James addresses the issue of favoritism based on money and appearance in chapter 2.....


James 2:1-10 WEB (R)
(1) My brothers, don't hold the faith of our Lord Jesus Christ of glory with partiality.
(2) For if a man with a gold ring, in fine clothing, comes into your synagogue, and a poor man in filthy clothing also comes in;
(3) and you pay special attention to him who wears the fine clothing, and say, "Sit here in a good place;" and you tell the poor man, "Stand there," or "Sit by my footstool;"
(4) haven't you shown partiality among yourselves, and become judges with evil thoughts?
(5) Listen, my beloved brothers. Didn't God choose those who are poor in this world to be rich in faith, and heirs of the Kingdom which he promised to those who love him?
(6) But you have dishonored the poor man. Don't the rich oppress you, and personally drag you before the courts?
(7) Don't they blaspheme the honorable name by which you are called?
(8) However, if you fulfill the royal law, according to the Scripture, "You shall love your neighbor as yourself," you do well.
(9) But if you show partiality, you commit sin, being convicted by the law as transgressors.
(10) For whoever keeps the whole law, and yet stumbles in one point, he has become guilty of all.

Money can be a trap, not only for those who may be blessed by God with an abundance of it, but also for those who place an undue importance on it! Money should be spent out of love from the heart and recognized for what it is; a necessity and not an obsession! Jesus said a lot about money, but I really like this passage from Matthew:

Matthew 6:1-4 WEB (R)
(1) "Be careful that you don't do your charitable giving before men, to be seen by them, or else you have no reward from your Father who is in heaven.
(2) Therefore when you do merciful deeds, don't sound a trumpet before yourself, as the hypocrites do in the synagogues and in the streets, that they may get glory from men. Most certainly I tell you, they have received their reward.
(3) But when you do merciful deeds, don't let your left hand know what your right hand does,
(4) so that your merciful deeds may be in secret, then your Father who sees in secret will reward you openly.

If you consider the innate worth of a human being based on the spiritual worth God places on them, money, position, power... all are really unimportant! What you may have is not as important as how much you love and are loved. Having said all this, I still appreciate LOOKING at the finer things in life, but I am NOT going to run right out and buy something like this ring, for openers, I don't have the money!
Email ThisBlogThis!Share to TwitterShare to FacebookShare to Pinterest
Newer Posts Older Posts Home
Subscribe to: Posts (Atom)