Life with a conscience... 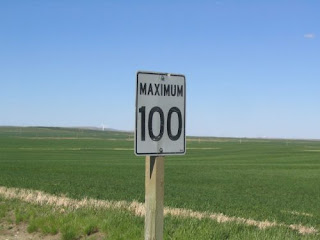 Imagine be allowed to propel your car at this speed, legally?  Would you even want to?  Would it be safe?  Would it be prudent?  Operation of a motor vehicle at a much lower speed than the posted speed limit can actually get you a ticket for driving too slowly. Would you break the law by only going, say 50 or 60 mph?  How do we react to law and what do we do about it?  As I mentioned yesterday, I have been reading about Hitler and the causes of the second world war.  Its fascinating to me that he gained power legitimately and the people obeyed whatever laws were enacted.  Let me say that again... the people obeyed whatever laws were enacted!!!  Which naturally raises the question: What if the powers that be required you to do something that was obviously contrary to the word of God?  Most of the German people under The Third Reich blindly obeyed any enacted law and millions of non-Aryan people died. But what about those who follow Jesus, the Christ?  Can we do just anything and everything that those in power tell us to do?  The answer is found within the book of Acts, chapter five...
WEB: Acts Chapter 5

[12] By the hands of the apostles many signs and wonders were done among the people. They were all with one accord in Solomon’s porch. [13] None of the rest dared to join them, however the people honored them. [14] More believers were added to the Lord, multitudes of both men and women. [15] They even carried out the sick into the streets, and laid them on cots and mattresses, so that as Peter came by, at the least his shadow might overshadow some of them. [16] Multitudes also came together from the cities around Jerusalem, bringing sick people, and those who were tormented by unclean spirits: and they were all healed.

[17] But the high priest rose up, and all those who were with him (which is the sect of the Sadducees), and they were filled with jealousy, [18] and laid hands on the apostles, and put them in public custody. [19] But an angel of the Lord opened the prison doors by night, and brought them out, and said, [20] “Go stand and speak in the temple to the people all the words of this life.”

[21] When they heard this, they entered into the temple about daybreak, and taught. But the high priest came, and those who were with him, and called the council together, and all the senate of the children of Israel, and sent to the prison to have them brought. [22] But the officers who came didn’t find them in the prison. They returned and reported, [23] “We found the prison shut and locked, and the guards standing before the doors, but when we opened them, we found no one inside!”

[24] Now when the high priest, the captain of the temple, and the chief priests heard these words, they were very perplexed about them and what might become of this. [25] One came and told them, “Behold, the men whom you put in prison are in the temple, standing and teaching the people.” [26] Then the captain went with the officers, and brought them without violence, for they were afraid that the people might stone them.

[27] When they had brought them, they set them before the council. The high priest questioned them, [28] saying, “Didn’t we strictly command you not to teach in this name? Behold, you have filled Jerusalem with your teaching, and intend to bring this man’s blood on us.”
[29] But Peter and the apostles answered, “We must obey God rather than men. [30] The God of our fathers raised up Jesus, whom you killed, hanging him on a tree. [31] God exalted him with his right hand to be a Prince and a Savior, to give repentance to Israel, and remission of sins. [32] We are His witnesses of these things; and so also is the Holy Spirit, whom God has given to those who obey him.”

[33] But they, when they heard this, were cut to the heart, and determined to kill them. [34] But one stood up in the council, a Pharisee named Gamaliel, a teacher of the law, honored by all the people, and commanded to put the apostles out for a little while. [35] He said to them, “You men of Israel, be careful concerning these men, what you are about to do. [36] For before these days Theudas rose up, making himself out to be somebody; to whom a number of men, about four hundred, joined themselves: who was slain; and all, as many as obeyed him, were dispersed, and came to nothing. [37] After this man, Judas of Galilee rose up in the days of the enrollment, and drew away some people after him. He also perished, and all, as many as obeyed him, were scattered abroad. [38] Now I tell you, withdraw from these men, and leave them alone. For if this counsel or this work is of men, it will be overthrown. [39] But if it is of God, you will not be able to overthrow it, and you would be found even to be fighting against God!”

[40] They agreed with him. Summoning the apostles, they beat them and commanded them not to speak in the name of Jesus, and let them go.
The apostles had a choice; do what was plainly the will of God or do what the religious authorities of the day told them to do.  They chose God and suffered for it.  But, they followed their conscience and OBEYED GOD.  Throughout history Christians have had to make tough choices; in the first three centuries, if you disobeyed the will of Caesar and openly worshiped Jesus, you could be put to death for it and probably a horrible death at that.  Okay, that was a long time ago, but what about today?  Well, there are many countries on this green Earth, that forbid Christianity.  You can die in these places for being faithful to Jesus.  So, the topic is relevant and thought provoking, even to this very day.  Think about this, the next time you are told to do something that bothers you.  Think this is ONLY about a 100 mph sign limit?  In America, if a minor becomes pregnant and her family tries to force her to have an abortion; what would YOU advise her to do?  Remember, thou shalt not kill?????????
Email ThisBlogThis!Share to TwitterShare to FacebookShare to Pinterest


2Pe 3:1 This is now, beloved, the second letter that I have written to you; and in both of them I stir up your sincere mind by reminding you;
2Pe 3:2 that you should remember the words which were spoken before by the holy prophets, and the commandments of us, the apostles of the Lord and Savior:
2Pe 3:3 knowing this first, that in the last days mockers will come, walking after their own lusts,
2Pe 3:4 and saying, "Where is the promise of his coming? For, from the day that the fathers fell asleep, all things continue as they were from the beginning of the creation."
2Pe 3:5 For this they willfully forget, that there were heavens from of old, and an earth formed out of water and amid water, by the word of God;
2Pe 3:6 by which means the world that then was, being overflowed with water, perished.
2Pe 3:7 But the heavens that now are, and the earth, by the same word have been stored up for fire, being reserved against the day of judgment and destruction of ungodly men.
2Pe 3:8 But don't forget this one thing, beloved, that one day is with the Lord as a thousand years, and a thousand years as one day.
2Pe 3:9 The Lord is not slow concerning his promise, as some count slowness; but is patient with us, not wishing that any should perish, but that all should come to repentance.
2Pe 3:10 But the day of the Lord will come as a thief in the night; in which the heavens will pass away with a great noise, and the elements will be dissolved with fervent heat, and the earth and the works that are in it will be burned up.
2Pe 3:11 Therefore since all these things will be destroyed like this, what kind of people ought you to be in holy living and godliness,
2Pe 3:12 looking for and earnestly desiring the coming of the day of God, which will cause the burning heavens to be dissolved, and the elements will melt with fervent heat?
2Pe 3:13 But, according to his promise, we look for new heavens and a new earth, in which righteousness dwells.
2Pe 3:14 Therefore, beloved, seeing that you look for these things, be diligent to be found in peace, without blemish and blameless in his sight.
2Pe 3:15 Regard the patience of our Lord as salvation; even as our beloved brother Paul also, according to the wisdom given to him, wrote to you;
2Pe 3:16 as also in all of his letters, speaking in them of these things. In those, there are some things that are hard to understand, which the ignorant and unsettled twist, as they also do to the other Scriptures, to their own destruction.
2Pe 3:17 You therefore, beloved, knowing these things beforehand, beware, lest being carried away with the error of the wicked, you fall from your own steadfastness.
2Pe 3:18 But grow in the grace and knowledge of our Lord and Savior Jesus Christ. To him be the glory both now and forever. Amen.

The labor that fails by Mark Copeland