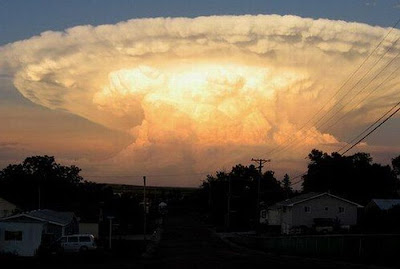 Atomic Bomb? No, its just the clouds, but what clouds!!!  Nearly every day I look at the formations they make and the patterns I observe seem endless.  Each and every time I see something in them it makes me think of the magnificence of the Almighty and realize my own insignificance.  Which, by the way, is exactly what JOB needed to learn.  God helped him with this lesson by asking him some interesting questions.  See if you can answer them?
Job 38:1-41 (WEB)
1) Then Yahweh answered Job out of the whirlwind,
2) “Who is this who darkens counsel by words without knowledge?
3) Brace yourself like a man, for I will question you, then you answer me!
4) “Where were you when I laid the foundations of the earth? Declare, if you have understanding.
5) Who determined its measures, if you know? Or who stretched the line on it?
6) Whereupon were its foundations fastened? Or who laid its cornerstone,
7) when the morning stars sang together, and all the sons of God shouted for joy?
8) “Or who shut up the sea with doors, when it broke forth from the womb,
9) when I made clouds its garment, and wrapped it in thick darkness,
10) marked out for it my bound, set bars and doors,
11) and said, ‘Here you may come, but no further. Here your proud waves shall be stayed?’
12) “Have you commanded the morning in your days, and caused the dawn to know its place;
13) that it might take hold of the ends of the earth, and shake the wicked out of it?
14) It is changed as clay under the seal, and stands forth as a garment.
15) From the wicked, their light is withheld. The high arm is broken.
16) “Have you entered into the springs of the sea? Or have you walked in the recesses of the deep?
17) Have the gates of death been revealed to you? Or have you seen the gates of the shadow of death?
18) Have you comprehended the earth in its breadth? Declare, if you know it all.
19) “What is the way to the dwelling of light? As for darkness, where is its place,
20) that you should take it to its bound, that you should discern the paths to its house?
21) Surely you know, for you were born then, and the number of your days is great!
22) Have you entered the treasuries of the snow, or have you seen the treasures of the hail,
23) which I have reserved against the time of trouble, against the day of battle and war?
24) By what way is the lightning distributed, or the east wind scattered on the earth?
25) Who has cut a channel for the flood water, or the path for the thunderstorm;
26) To cause it to rain on a land where no man is; on the wilderness, in which there is no man;
27) to satisfy the waste and desolate ground, to cause the tender grass to spring forth?
28) Does the rain have a father? Or who fathers the drops of dew?
29) Out of whose womb came the ice? The gray frost of the sky, who has given birth to it?
30) The waters become hard like stone, when the surface of the deep is frozen.
31) “Can you bind the cluster of the Pleiades, or loosen the cords of Orion?
32) Can you lead forth the constellations in their season? Or can you guide the Bear with her cubs?
33) Do you know the laws of the heavens? Can you establish its dominion over the earth?
34) “Can you lift up your voice to the clouds, That abundance of waters may cover you?
35) Can you send forth lightnings, that they may go? Do they report to you, ‘Here we are?’
36) Who has put wisdom in the inward parts? Or who has given understanding to the mind?
37) Who can number the clouds by wisdom? Or who can pour out the bottles of the sky,
38) when the dust runs into a mass, and the clods of earth stick together?
39) “Can you hunt the prey for the lioness, or satisfy the appetite of the young lions,
40) when they crouch in their dens, and lie in wait in the thicket?
41) Who provides for the raven his prey, when his young ones cry to God, and wander for lack of food?

Job 39:1-30 (WEB)
1) “Do you know the time when the mountain goats give birth? Do you watch when the doe bears fawns?
2) Can you number the months that they fulfill? Or do you know the time when they give birth?
3) They bow themselves, they bring forth their young, they end their labor pains.
4) Their young ones become strong. They grow up in the open field. They go forth, and don’t return again.
5) “Who has set the wild donkey free? Or who has loosened the bonds of the swift donkey,
6) Whose home I have made the wilderness, and the salt land his dwelling place?
7) He scorns the tumult of the city, neither does he hear the shouting of the driver.
8) The range of the mountains is his pasture, He searches after every green thing.
9) “Will the wild ox be content to serve you? Or will he stay by your feeding trough?
10) Can you hold the wild ox in the furrow with his harness? Or will he till the valleys after you?
11) Will you trust him, because his strength is great? Or will you leave to him your labor?
12) Will you confide in him, that he will bring home your seed, and gather the grain of your threshing floor?
13) “The wings of the ostrich wave proudly; but are they the feathers and plumage of love?

15) and forgets that the foot may crush them, or that the wild animal may trample them.
16) She deals harshly with her young ones, as if they were not hers. Though her labor is in vain, she is without fear,
17) because God has deprived her of wisdom, neither has he imparted to her understanding.
18) When she lifts up herself on high, she scorns the horse and his rider.
19) “Have you given the horse might? Have you clothed his neck with a quivering mane?
20) Have you made him to leap as a locust? The glory of his snorting is awesome.
21) He paws in the valley, and rejoices in his strength. He goes out to meet the armed men.
22) He mocks at fear, and is not dismayed, neither does he turn back from the sword.
23) The quiver rattles against him, the flashing spear and the javelin.
24) He eats up the ground with fierceness and rage, neither does he stand still at the sound of the trumpet.
25) As often as the trumpet sounds he snorts, ‘Aha!’ He smells the battle afar off, the thunder of the captains, and the shouting.
26) “Is it by your wisdom that the hawk soars, and stretches her wings toward the south?
27) Is it at your command that the eagle mounts up, and makes his nest on high?
28) On the cliff he dwells, and makes his home, on the point of the cliff, and the stronghold.
29) From there he spies out the prey. His eyes see it afar off.
30) His young ones also suck up blood. Where the slain are, there he is.”
Job 40:1-2 (WEB)

Job 40
1) Moreover Yahweh answered Job,
2) “Shall he who argues contend with the Almighty? He who argues with God, let him answer it.”


Hint: Don't even try!!!  Some things are beyond our knowledge and understanding!!!  Yet, the questions that God asks make us marvel at the complexity of the universe and the true grandeur that the creator must possess.  What are we compared to that?  In actuality, not much at all.  However, God has given us the ability to perceive his greatness and a good way to begin is to start looking up... who knows what we may see next?
Email ThisBlogThis!Share to TwitterShare to FacebookShare to Pinterest