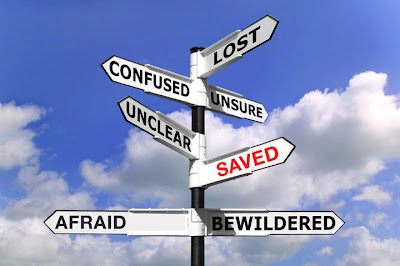 Look around, whole countries are in trouble.  There is a world-wide economic depression and people the whole world over are hurting and seeking answers.  Beyond this problem lies a deeper, more sinister problem.  Evil abounds, with its pervasive tentacles slowly chocking the spiritual life from countless individuals.  People are lost and afraid; hopelessness has become common.  There just seems to be no safe direction to follow.  Yet, for those of us who have not become "spiritually color-blind" there is a way out.  Now would be a good time to look at the picture once again and then read the following verses from Paul's second letter to the Corinthians....

2 Corinthians, Chapter 4
3 Even if our Good News is veiled, it is veiled in those who perish;  4 in whom the god of this world has blinded the minds of the unbelieving, that the light of the Good News of the glory of Christ, who is the image of God, should not dawn on them.  5 For we don’t preach ourselves, but Christ Jesus as Lord, and ourselves as your servants for Jesus’ sake;  6 seeing it is God who said, “Light will shine out of darkness,” who has shone in our hearts, to give the light of the knowledge of the glory of God in the face of Jesus Christ.

Open both your heart and mind to what Jesus can do for you!!! Have faith; it really DOES NOT MATTER whether the economy is bad or good, or you have money or health or friends or possessions.  If you are on the road that leads to heaven, you have it all!!!!  In a hundred years, all the things that you think are worth something will be unimportant and but a dim memory.  IF YOU OPEN YOUR EYES TO THE TRUTH OF WHAT JESUS HAS TAUGHT AND OBEY GOD'S WILL, then you REALLY HAVE SOMETHING INDEED!!!  Do not be blinded by the things of this world!!! Get on the right path NOW, before it is TOO LATE!!! Then your life will be a "sign" to others to look to Jesus as well!!!  LOOK AT THE SIGN ONE MORE TIME AND KEEP LOOKING!!!!

Act 16:1 He came to Derbe and Lystra: and behold, a certain disciple was there, named Timothy, the son of a Jewess who believed; but his father was a Greek.
Act 16:2 The brothers who were at Lystra and Iconium gave a good testimony about him.
Act 16:3 Paul wanted to have him go out with him, and he took and circumcised him because of the Jews who were in those parts; for they all knew that his father was a Greek.
Act 16:4 As they went on their way through the cities, they delivered the decrees to them to keep which had been ordained by the apostles and elders who were at Jerusalem.
Act 16:5 So the assemblies were strengthened in the faith, and increased in number daily.
Act 16:6 When they had gone through the region of Phrygia and Galatia, they were forbidden by the Holy Spirit to speak the word in Asia.
Act 16:7 When they had come opposite Mysia, they tried to go into Bithynia, but the Spirit didn't allow them.
Act 16:8 Passing by Mysia, they came down to Troas.
Act 16:9 A vision appeared to Paul in the night. There was a man of Macedonia standing, begging him, and saying, "Come over into Macedonia and help us."
Act 16:10 When he had seen the vision, immediately we sought to go out to Macedonia, concluding that the Lord had called us to preach the Good News to them.
Act 16:11 Setting sail therefore from Troas, we made a straight course to Samothrace, and the day following to Neapolis;
Act 16:12 and from there to Philippi, which is a city of Macedonia, the foremost of the district, a Roman colony. We were staying some days in this city.
Act 16:13 On the Sabbath day we went forth outside of the city by a riverside, where we supposed there was a place of prayer, and we sat down, and spoke to the women who had come together.
Act 16:14 A certain woman named Lydia, a seller of purple, of the city of Thyatira, one who worshiped God, heard us; whose heart the Lord opened to listen to the things which were spoken by Paul.
Act 16:15 When she and her household were baptized, she begged us, saying, "If you have judged me to be faithful to the Lord, come into my house, and stay." So she persuaded us.
Act 16:16 It happened, as we were going to prayer, that a certain girl having a spirit of divination met us, who brought her masters much gain by fortune telling.
Act 16:17 Following Paul and us, she cried out, "These men are servants of the Most High God, who proclaim to us a way of salvation!"
Act 16:18 She was doing this for many days. But Paul, becoming greatly annoyed, turned and said to the spirit, "I command you in the name of Jesus Christ to come out of her!" It came out that very hour.
Act 16:19 But when her masters saw that the hope of their gain was gone, they seized Paul and Silas, and dragged them into the marketplace before the rulers.
Act 16:20 When they had brought them to the magistrates, they said, "These men, being Jews, are agitating our city,
Act 16:21 and set forth customs which it is not lawful for us to accept or to observe, being Romans."
Act 16:22 The multitude rose up together against them, and the magistrates tore their clothes off of them, and commanded them to be beaten with rods.
Act 16:23 When they had laid many stripes on them, they threw them into prison, charging the jailer to keep them safely,
Act 16:24 who, having received such a command, threw them into the inner prison, and secured their feet in the stocks.
Act 16:25 But about midnight Paul and Silas were praying and singing hymns to God, and the prisoners were listening to them.
Act 16:26 Suddenly there was a great earthquake, so that the foundations of the prison were shaken; and immediately all the doors were opened, and everyone's bonds were loosened.
Act 16:27 The jailer, being roused out of sleep and seeing the prison doors open, drew his sword and was about to kill himself, supposing that the prisoners had escaped.
Act 16:28 But Paul cried with a loud voice, saying, "Don't harm yourself, for we are all here!"
Act 16:29 He called for lights and sprang in, and, fell down trembling before Paul and Silas,
Act 16:30 and brought them out and said, "Sirs, what must I do to be saved?"
Act 16:31 They said, "Believe in the Lord Jesus Christ, and you will be saved, you and your household."
Act 16:32 They spoke the word of the Lord to him, and to all who were in his house.
Act 16:33 He took them the same hour of the night, and washed their stripes, and was immediately baptized, he and all his household.
Act 16:34 He brought them up into his house, and set food before them, and rejoiced greatly, with all his household, having believed in God.
Act 16:35 But when it was day, the magistrates sent the sergeants, saying, "Let those men go."
Act 16:36 The jailer reported these words to Paul, saying, "The magistrates have sent to let you go; now therefore come out, and go in peace."
Act 16:37 But Paul said to them, "They have beaten us publicly, without a trial, men who are Romans, and have cast us into prison! Do they now release us secretly? No, most certainly, but let them come themselves and bring us out!"
Act 16:38 The sergeants reported these words to the magistrates, and they were afraid when they heard that they were Romans,
Act 16:39 and they came and begged them. When they had brought them out, they asked them to depart from the city.
Act 16:40 They went out of the prison, and entered into Lydia's house. When they had seen the brothers, they encouraged them, and departed.

"THE SECOND EPISTLE TO THE CORINTHIANS" Chapter Seven