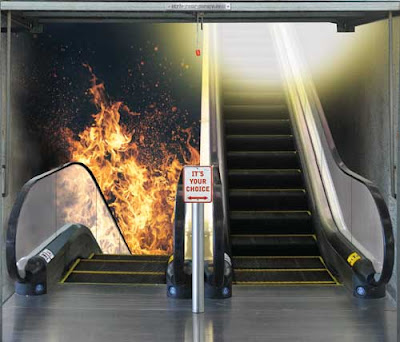 There are times when things have to be changed and today's post is one of them. I was thinking about what to post on the blog today while waiting for an x-ray and had just about made up my mind. When I came home I received an e-mail from Bruce Arnold with this picture in it and suddenly the choice of what to post became just as clear as the choice in this picture. Why is it that we do not think about this scenario before we do something wrong? Are we so insensitive to God's will that we only think about him one hour on Sunday? Could be, but probably not. America has more followers of God in it than anyone could imagine, we just need to remember the terrible cost of sin and our own helplessness to justify ourselves before God. There is a real need to have faith and rely on God to help us make the right choice every time. Think about this passage from the Gospel of Luke.

Luke 18:9-14
9 He spoke also this parable to certain people who were convinced of their own righteousness, and who despised all others.
10 "Two men went up into the temple to pray; one was a Pharisee, and the other was a tax collector.
11 The Pharisee stood and prayed to himself like this: 'God, I thank you, that I am not like the rest of men, extortioners, unrighteous, adulterers, or even like this tax collector.
12 I fast twice a week. I give tithes of all that I get.'
13 But the tax collector, standing far away, wouldn't even lift up his eyes to heaven, but beat his breast, saying, 'God, be merciful to me, a sinner!'
14 I tell you, this man went down to his house justified rather than the other; for everyone who exalts himself will be humbled, but he who humbles himself will be exalted."WEB

Ok, nobody likes to be called a Pharisee, but remember, there were good ones too. This Pharisee probably really did try to follow God as best he could, but his zeal undoubtedly led to pride and pride kills. The tax collector knew who he was and where he was going, but he was trying to do better, trying to following God. His prayer reveals his faith and the humbleness of his heart. The dean of the Northeast School of Biblical Studies (J.L. Deason) used to say that faith was a "Forsaking All I Take Him" and that reliance is something we need to remember on a daily basis. God in heaven, help us all to make the right choices; because these choices either have the truth of God in them or the consequences of pride. What next..... YOUR CHOICE!
Email ThisBlogThis!Share to TwitterShare to FacebookShare to Pinterest
Newer Posts Older Posts Home
Subscribe to: Posts (Atom)