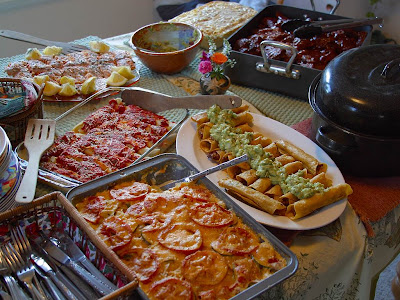 1982. I was on a try-out for a preaching position in Minnesota. After teaching the adult class and presenting a sermon, I was treated to a pot-luck something like this only MUCH, MUCH LARGER. The food was delicious, but since I had to try every one's favorite dish, I had the weirdest combination of foods I had ever had. One leg of the flight home was on a small nine passenger plane and we ran into a severe storm. We went up and down hundreds of feet at a time and you guessed it... I started to turn green. As we hit the runway, I used the bag provided for airsickness and filled it completely. As we deplaned a Cherie stewardess was about to ask me how my flight was, but I placed the warm bag in her hands. When she realized what the warmth meant, she didn't know what to say, but attempted a smile and just nodded her head knowingly. I really don't know if this episode made her think about what she did, but I know I did. Sometimes you can see things happening to you and you don't know WHY and other times you realize their importance later. I saw how professionally the stewardess acted and this example has stayed with me all these years. When I encounter a difficult customer, I remember this episode and try to be the best I can, REGARDLESS OF THE CIRCUMSTANCES. The Apostle Paul was faced with something like this in the book of 2nd Corinthians.
2Co 12:1 It is doubtless not profitable for me to boast. For I will come to visions and revelations of the Lord.
2Co 12:2 I know a man in Christ, fourteen years ago (whether in the body, I don't know, or whether out of the body, I don't know; God knows), such a one caught up into the third heaven.
2Co 12:3 I know such a man (whether in the body, or outside of the body, I don't know; God knows),
2Co 12:4 how he was caught up into Paradise, and heard unspeakable words, which it is not lawful for a man to utter.
2Co 12:5 On behalf of such a one I will boast, but on my own behalf I will not boast, except in my weaknesses.
2Co 12:6 For if I would desire to boast, I will not be foolish; for I will speak the truth. But I refrain, so that no man may think more of me than that which he sees in me, or hears from me.
2Co 12:7 By reason of the exceeding greatness of the revelations, that I should not be exalted excessively, there was given to me a thorn in the flesh, a messenger of Satan to torment me, that I should not be exalted excessively.
2Co 12:8 Concerning this thing, I begged the Lord three times that it might depart from me.
2Co 12:9 He has said to me, "My grace is sufficient for you, for my power is made perfect in weakness." Most gladly therefore I will rather glory in my weaknesses, that the power of Christ may rest on me.
2Co 12:10 Therefore I take pleasure in weaknesses, in injuries, in necessities, in persecutions, in distresses, for Christ's sake. For when I am weak, then am I strong.
World English Bible
God had blessed Paul. His thorn in the flesh was a reminder to be humble; a little lesson to help him grow spiritually. When bad things happen, it is best to learn from the situation and grow as a result. A professor of mine used to say: "When bad things happen, you either get bitter or better". I probably could have learned this lesson another way, but the memory of the shock on that poor lady's face did the trick... I remembered and learned. However, I just wish I had not turned green because that was the color of my suit; I must have looked like a giant green pea.
Email ThisBlogThis!Share to TwitterShare to FacebookShare to Pinterest
Newer Posts Older Posts Home
Subscribe to: Posts (Atom)