This little picture is of an angel; or at least someones idea of an angel. I thought of angel's yesterday when I met a friend in a store with which I had had some conversations about angel's. The Bible has a great deal to say about them, far more than 20 posts could accommodate, but here is one passage that comes to mind.


Matthew 22:23-32 (WEB)
23) On that day Sadducees (those who say that there is no resurrection) came to him. They asked him,
24) saying, “Teacher, Moses said, ‘If a man dies, having no children, his brother shall marry his wife, and raise up seed for his brother.’
25) Now there were with us seven brothers. The first married and died, and having no seed left his wife to his brother.
26) In the same way, the second also, and the third, to the seventh.
27) After them all, the woman died.
28) In the resurrection therefore, whose wife will she be of the seven? For they all had her.”
29) But Jesus answered them, “You are mistaken, not knowing the Scriptures, nor the power of God.
30) For in the resurrection they neither marry, nor are given in marriage, but are like God’s angels in heaven.
31) But concerning the resurrection of the dead, haven’t you read that which was spoken to you by God, saying,
32) ‘I am the God of Abraham, and the God of Isaac, and the God of Jacob?’ God is not the God of the dead, but of the living.”

Jesus was a problem for the religious elite; he confronted them and kept on doing so and they didn't like it one bit. So they went on the offensive and asked him a question they thought he would never be able to answer to their satisfaction. A question which, in an of itself, is ironic, because those asking did not believe in the resurrection of the dead. Basically, he told the Sadducees they knew nothing about the next life or the God whom they proported to know. At the resurrection we will be like angels and marriage won't matter and that God truly is GOD for the living. Talk about a put down!! This is all very interesting because people (especially the Saducees and Pharisees) have always argued over angels. One of the most famous arguements was over how many angels could fit on the head of a pin, so I guess this tiny little picture really is appropriate after all. One thing is very sure though, if the God you know is in fact the God of the living... then there is life after this life and we can find all about Angels later. Good lesson here: don't try to argue with someone who knows more than you do.... you just might lose. Just a few verses later in Matthew 22 we read:

Matthew 22:41-46 (WEB)
41) Now while the Pharisees were gathered together, Jesus asked them a question,
42) saying, “What do you think of the Christ? Whose son is he?” They said to him, “Of David.”
43) He said to them, “How then does David in the Spirit call him Lord, saying,
44) ‘The Lord said to my Lord, sit on my right hand, until I make your enemies a footstool for your feet?’
45) “If then David calls him Lord, how is he his son?”
46) No one was able to answer him a word, neither did any man dare ask him any more questions from that day forth.
Point, match, game over!
Email ThisBlogThis!Share to TwitterShare to FacebookShare to Pinterest

The power of the sun (son) 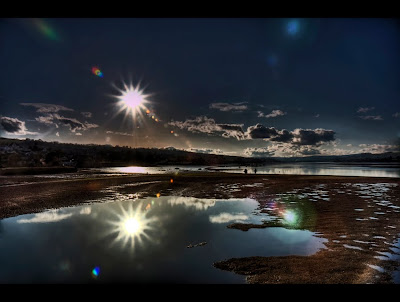 This is one amazing HDR picture! Not only is the contrast great, but the prism effects at the top left and bottom right show something very important; the true strength of sunlight. As for the sun itself, well, the lines protruding from it testify to its power. If you have ever worked outside in July at noontime, you know how really overpowering the sun can be at times. This picture made me think of Paul before king Agrippa, when he made his defense.

Acts 26
1) Agrippa said to Paul, “You may speak for yourself.” Then Paul stretched out his hand, and made his defense.
2) “I think myself happy, King Agrippa, that I am to make my defense before you this day concerning all the things that I am accused by the Jews,
3) especially because you are expert in all customs and questions which are among the Jews. Therefore I beg you to hear me patiently.
4) “Indeed, all the Jews know my way of life from my youth up, which was from the beginning among my own nation and at Jerusalem;
5) having known me from the first, if they are willing to testify, that after the strictest sect of our religion I lived a Pharisee.
6) Now I stand here to be judged for the hope of the promise made by God to our fathers,
7) which our twelve tribes, earnestly serving night and day, hope to attain. Concerning this hope I am accused by the Jews, King Agrippa!
8) Why is it judged incredible with you, if God does raise the dead?
9) “I myself most certainly thought that I ought to do many things contrary to the name of Jesus of Nazareth.
10) This I also did in Jerusalem. I both shut up many of the saints in prisons, having received authority from the chief priests, and when they were put to death I gave my vote against them.
11) Punishing them often in all the synagogues, I tried to make them blaspheme. Being exceedingly enraged against them, I persecuted them even to foreign cities.
12) “Whereupon as I traveled to Damascus with the authority and commission from the chief priests,
13) at noon, O king, I saw on the way a light from the sky, brighter than the sun, shining around me and those who traveled with me.
14) When we had all fallen to the earth, I heard a voice saying to me in the Hebrew language, ‘Saul, Saul, why are you persecuting me? It is hard for you to kick against the goads.’
15) “I said, ‘Who are you, Lord?’ “He said, ‘I am Jesus, whom you are persecuting.
16) But arise, and stand on your feet, for I have appeared to you for this purpose: to appoint you a servant and a witness both of the things which you have seen, and of the things which I will reveal to you;
17) delivering you from the people, and from the Gentiles, to whom I send you,
18) to open their eyes, that they may turn from darkness to light and from the power of Satan to God, that they may receive remission of sins and an inheritance among those who are sanctified by faith in me.’
19) “Therefore, King Agrippa, I was not disobedient to the heavenly vision,
20) but declared first to them of Damascus, at Jerusalem, and throughout all the country of Judea, and also to the Gentiles, that they should repent and turn to God, doing works worthy of repentance.
21) For this reason the Jews seized me in the temple, and tried to kill me.
22) Having therefore obtained the help that is from God, I stand to this day testifying both to small and great, saying nothing but what the prophets and Moses said would happen,
23) how the Christ must suffer, and how, by the resurrection of the dead, he would be first to proclaim light both to these people and to the Gentiles.”
A light BRIGHTER than the sun? That is hard for me to imagine! Yet, it happened! Why? Because God wanted it to, that's why. Jesus intervened and changed Paul's life forever. God does things like that because HE wants to. Honestly, Paul never really impressed me; just a Pharisee doing what he thought he must. God must have thought differently, because this man was a chosen vessel to bring light to the non-Jewish peoples. The next time you go outside in the bright sunlight, think of Paul and remember. Who knows, maybe there is a mission for you to perform as well?
Email ThisBlogThis!Share to TwitterShare to FacebookShare to Pinterest
Newer Posts Older Posts Home
Subscribe to: Posts (Atom)