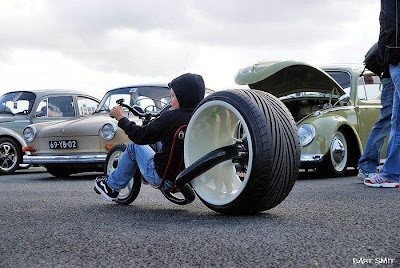 Here we go again! A "new BIG WHEEL"!!!  But, is it?  Let me see... there is a boy, a small wheel, a big wheel in the back, a place to sit and then something new (which is at the same time something old)... a bell on the handlebar!!!  I wish they had this little pleasure vehicle instead of that all plastic one I remember.  The one that made all the noise on the gravel as it went UP AND DOWN, THEN UP AND DOWN AND UP AND DOWN the little hill in front of our house in Valley Falls.  The one that kept me up all day, when I should have been sleeping (I worked midnight to 8 in the morning).  But, honestly, this is a big improvement!  This looks great and far more comfortable that the one I remember.  But, it is STILL A BOB'S BIG BOY TOY TO ME.  Nothing really changes, a toy is still a toy, no matter what it looks like.  Solomon put it this way...
WEB: Ecclesiastes 1:9. That which has been is that which shall be; and that which has been done is that which shall be done: and there is no new thing under the sun.
We have more technology, better tools, clever marketing and sexy models to sell it all, but basically a toy is still a toy.  Kids grow out of them like last year's shoes.  The barrage of "things" to buy is ever greater with each passing year, but generically nothing changes, even though it may appear different.  I am glad God doesn't change; that I can always count on him to be there and do the right thing!
All this being said; the new "big wheel" is a beautiful thing!  I wonder, does God have toys....?
Email ThisBlogThis!Share to TwitterShare to FacebookShare to Pinterest


Gen 39:1 Joseph was brought down to Egypt. Potiphar, an officer of Pharaoh's, the captain of the guard, an Egyptian, bought him from the hand of the Ishmaelites that had brought him down there.
Gen 39:2 Yahweh was with Joseph, and he was a prosperous man. He was in the house of his master the Egyptian.
Gen 39:3 His master saw that Yahweh was with him, and that Yahweh made all that he did prosper in his hand.
Gen 39:4 Joseph found favor in his sight. He ministered to him, and he made him overseer over his house, and all that he had he put into his hand.
Gen 39:5 It happened from the time that he made him overseer in his house, and over all that he had, that Yahweh blessed the Egyptian's house for Joseph's sake; and the blessing of Yahweh was on all that he had, in the house and in the field.
Gen 39:6 He left all that he had in Joseph's hand. He didn't concern himself with anything, except for the food which he ate. Joseph was well-built and handsome.
Gen 39:7 It happened after these things, that his master's wife cast her eyes on Joseph; and she said, "Lie with me."
Gen 39:8 But he refused, and said to his master's wife, "Behold, my master doesn't know what is with me in the house, and he has put all that he has into my hand.
Gen 39:9 He isn't greater in this house than I, neither has he kept back anything from me but you, because you are his wife. How then can I do this great wickedness, and sin against God?"
Gen 39:10 As she spoke to Joseph day by day, he didn't listen to her, to lie by her, or to be with her.
Gen 39:11 About this time, he went into the house to do his work, and there were none of the men of the house inside.
Gen 39:12 She caught him by his garment, saying, "Lie with me!" He left his garment in her hand, and ran outside.
Gen 39:13 When she saw that he had left his garment in her hand, and had run outside,
Gen 39:14 she called to the men of her house, and spoke to them, saying, "Behold, he has brought in a Hebrew to us to mock us. He came in to me to lie with me, and I cried with a loud voice.
Gen 39:15 It happened, when he heard that I lifted up my voice and cried, that he left his garment by me, and ran outside."
Gen 39:16 She laid up his garment by her, until his master came home.
Gen 39:17 She spoke to him according to these words, saying, "The Hebrew servant, whom you have brought to us, came in to me to mock me,
Gen 39:18 and it happened, as I lifted up my voice and cried, that he left his garment by me, and ran outside."
Gen 39:19 It happened, when his master heard the words of his wife, which she spoke to him, saying, "This is what your servant did to me," that his wrath was kindled.
Gen 39:20 Joseph's master took him, and put him into the prison, the place where the king's prisoners were bound, and he was there in custody.
Gen 39:21 But Yahweh was with Joseph, and showed kindness to him, and gave him favor in the sight of the keeper of the prison.
Gen 39:22 The keeper of the prison committed to Joseph's hand all the prisoners who were in the prison. Whatever they did there, he was responsible for it.
Gen 39:23 The keeper of the prison didn't look after anything that was under his hand, because Yahweh was with him; and that which he did, Yahweh made it prosper.


Mat 20:1 "For the Kingdom of Heaven is like a man who was the master of a household, who went out early in the morning to hire laborers for his vineyard.
Mat 20:2 When he had agreed with the laborers for a denarius a day, he sent them into his vineyard.
Mat 20:3 He went out about the third hour, and saw others standing idle in the marketplace.
Mat 20:4 To them he said, 'You also go into the vineyard, and whatever is right I will give you.' So they went their way.
Mat 20:5 Again he went out about the sixth and the ninth hour, and did likewise.
Mat 20:6 About the eleventh hour he went out, and found others standing idle. He said to them, 'Why do you stand here all day idle?'
Mat 20:7 "They said to him, 'Because no one has hired us.' "He said to them, 'You also go into the vineyard, and you will receive whatever is right.'
Mat 20:8 When evening had come, the lord of the vineyard said to his manager, 'Call the laborers and pay them their wages, beginning from the last to the first.'
Mat 20:9 "When those who were hired at about the eleventh hour came, they each received a denarius.
Mat 20:10 When the first came, they supposed that they would receive more; and they likewise each received a denarius.
Mat 20:11 When they received it, they murmured against the master of the household,
Mat 20:12 saying, 'These last have spent one hour, and you have made them equal to us, who have borne the burden of the day and the scorching heat!'
Mat 20:13 "But he answered one of them, 'Friend, I am doing you no wrong. Didn't you agree with me for a denarius?
Mat 20:14 Take that which is yours, and go your way. It is my desire to give to this last just as much as to you.
Mat 20:15 Isn't it lawful for me to do what I want to with what I own? Or is your eye evil, because I am good?'
Mat 20:16 So the last will be first, and the first last. For many are called, but few are chosen."
Mat 20:17 As Jesus was going up to Jerusalem, he took the twelve disciples aside, and on the way he said to them,
Mat 20:18 "Behold, we are going up to Jerusalem, and the Son of Man will be delivered to the chief priests and scribes, and they will condemn him to death,
Mat 20:19 and will hand him over to the Gentiles to mock, to scourge, and to crucify; and the third day he will be raised up."
Mat 20:20 Then the mother of the sons of Zebedee came to him with her sons, kneeling and asking a certain thing of him.
Mat 20:21 He said to her, "What do you want?" She said to him, "Command that these, my two sons, may sit, one on your right hand, and one on your left hand, in your Kingdom."
Mat 20:22 But Jesus answered, "You don't know what you are asking. Are you able to drink the cup that I am about to drink, and be baptized with the baptism that I am baptized with?" They said to him, "We are able."
Mat 20:23 He said to them, "You will indeed drink my cup, and be baptized with the baptism that I am baptized with, but to sit on my right hand and on my left hand is not mine to give; but it is for whom it has been prepared by my Father."
Mat 20:24 When the ten heard it, they were indignant with the two brothers.
Mat 20:25 But Jesus summoned them, and said, "You know that the rulers of the nations lord it over them, and their great ones exercise authority over them.
Mat 20:26 It shall not be so among you, but whoever desires to become great among you shall be your servant.
Mat 20:27 Whoever desires to be first among you shall be your bondservant,
Mat 20:28 even as the Son of Man came not to be served, but to serve, and to give his life as a ransom for many."
Mat 20:29 As they went out from Jericho, a great multitude followed him.
Mat 20:30 Behold, two blind men sitting by the road, when they heard that Jesus was passing by, cried out, "Lord, have mercy on us, you son of David!"
Mat 20:31 The multitude rebuked them, telling them that they should be quiet, but they cried out even more, "Lord, have mercy on us, you son of David!"
Mat 20:32 Jesus stood still, and called them, and asked, "What do you want me to do for you?"
Mat 20:33 They told him, "Lord, that our eyes may be opened."
Mat 20:34 Jesus, being moved with compassion, touched their eyes; and immediately their eyes received their sight, and they followed him.

Cohabitation before marriage by Mark Copeland