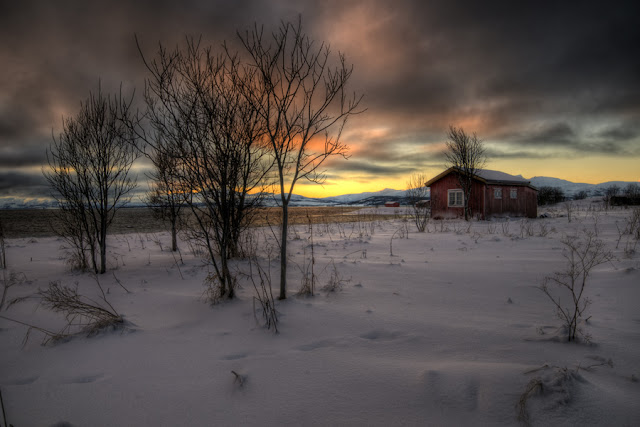 While at the Chiropractor yesterday, the young lady who did our appointment scheduling (Lori) said to me: "You do a blog post, EVERY DAY"?  When I mentioned that I generally post about six or so, she was surprised.  While at least four of my posts are from others, still, some days it is difficult to write and others- its a snap!!! Today falls into the latter category.  When I was reviewing my cache of pictures, this one seemed to just POP!!! It is a "HDR" picture and the contrasts are simply wonderful; it almost made me feel cold just looking at it.  And I really don't remember ever seeing a lemon yellow sunrise before.  I will remember this picture for some time BECAUSE OF THE CONTRASTS.  People sometimes stick to your memory as well; both the very nice and the awfully bad.  But, how do come to those definitions anyway?  Well, please read the following passage from Colossians and see if you can come up the a standard...

1 If then you were raised together with Christ, seek the things that are above, where Christ is, seated on the right hand of God.  2 Set your mind on the things that are above, not on the things that are on the earth.  3 For you died, and your life is hidden with Christ in God.  4 When Christ, our life, is revealed, then you will also be revealed with him in glory.  5 Put to death therefore your members which are on the earth: sexual immorality, uncleanness, depraved passion, evil desire, and covetousness, which is idolatry;  6 for which things’ sake the wrath of God comes on the children of disobedience.  7 You also once walked in those, when you lived in them; 8 but now you also put them all away: anger, wrath, malice, slander, and shameful speaking out of your mouth. 9 Don’t lie to one another, seeing that you have put off the old man with his doings,  10 and have put on the new man, who is being renewed in knowledge after the image of his Creator,  11 where there can’t be Greek and Jew, circumcision and uncircumcision, barbarian, Scythian, bondservant, freeman; but Christ is all, and in all.

12  Put on therefore, as God’s chosen ones, holy and beloved, a heart of compassion, kindness, lowliness, humility, and perseverance;  13 bearing with one another, and forgiving each other, if any man has a complaint against any; even as Christ forgave you, so you also do.

14  Above all these things, walk in love, which is the bond of perfection.  15 And let the peace of God rule in your hearts, to which also you were called in one body; and be thankful.  16 Let the word of Christ dwell in you richly; in all wisdom teaching and admonishing one another with psalms, hymns, and spiritual songs, singing with grace in your heart to the Lord.

17  Whatever you do, in word or in deed, do all in the name of the Lord Jesus, giving thanks to God the Father, through him.

Simple, if God is in your heart, then his desire for you will be in your life.  Strange as it may seem, God lives through you because HE is IN YOU!!!  Those who knew you before you decided to become a Christian will be amazed at the change and some may even laugh out loud to your face (that actually happened to me).  But, to live a life grounded in love (verse fourteen above) is much better than living with all the sin ascribed to the "old man" referred to above.  Try it, you'll like it; I promise!!!
Email ThisBlogThis!Share to TwitterShare to FacebookShare to Pinterest

THE NARROW GATE by Gary Womack

THERE PROBABLY IS NO GOD by Jim McGuiggan

THERE PROBABLY IS NO GOD

“(Feb. 4) -- More than 47 million years ago, a whale was about to give birth to her young ... on land. That's according to skeletal remains of a pregnant cetacean whose fetus was positioned head-down as is the case for land mammals but not aquatic whales. The teeth of the fetus were so well-developed that researchers who analyzed the fossils think the baby would have been born within days, had its mom not died…Recently discovered fossilized bones from a pregnant whale show that the water-based animal gave birth on land. The rare find provides a vital scientific link in the evolution of the seafaring mammal.”

There’s one brand of “science” at work. Forty-seven million years ago, give or take a few weeks, a whale whose baby was due to be born within days was faced in an unusual direction. The whale ended up on land and died there but its death was not in vain for it has provided “a vital link in the evolution of the sea-faring mammal.”
Hmmm.

From the skeleton the experts were able to tell “ancient whales gave birth on land.”

From the skeleton the experts were able to tell that the “mom” deliberately headed for land to birth the baby on land.

We see a lot of whales on land, dying, and people try to get them back in the water. It seems the rank and file think the poor creature has lost its bearings.

I’m tempted to think that this poor creature lost its bearings and if it hadn’t ended up on land it might not have died and birthed its baby in the water as usual.

“A vital link” in the whale’s evolution, Hmmm. How does that work? I’ve long suspected that the “links” in the evolutionary chain are as weak as this one.

From this one skeleton of a pregnant whale that might have been thrown up on land against its will by some force of nature or might have been so sick from some internal problem that in its confusion it flopped up on land (as many do)—the experts now know that “Ancient Whales Gave Birth on Land”.
These are the kind of people who put banners up on buses: There probably is no God.
[p.s. I love it when animals are called “mom” to a “fetus”. I wonder do these people ever talk that way about humans.]
©2004 Jim McGuiggan. All materials are free to be copied and used as long as money is not being made.
Email ThisBlogThis!Share to TwitterShare to FacebookShare to Pinterest

The Suffering Question by Jim McGuiggan

It would be a mistake to say that the world's great suffering must be answered adequately or everyone will become an atheist. That just isn't so! Believe it or not, it's a modern idea that wholesale suffering must mean there is no God. You only have to read through the Hebrew-Christian scriptures (and others as well) to see that down the centuries people lived with passionate faith in God (or gods) despite suffering. The Bible is filled with the "why?" question but the question is always addressed to God! It's never, "Since this is so you can't exist" and always, "You exist and your reputation is that you care for us so why is this happening?"
Of course even that is something of an overstatement because sometimes the prophets knew exactly why the peoples were suffering. "We have sinned and you have turned your face from us," they will often say. But that's only one face of suffering in the Bible because we find "undeserved" suffering recorded all over the place.
In life as in scripture we find blessing and curse, pain and pleasure sitting side by side. It isn't all pain and it isn't all pleasure. So while it's a nonsense (and anti-Christ as we can see from Matthew 25) to ignore or airily dismiss all the agony it's a serious mistake for the heart and head to ignore all the wonder and loveliness and blessing.
What if it's true that there is a cosmic "power" that Christians call sin that God is redeeming us from? What if there is something beyond the physical that makes sense of all suffering (undeserved and deserved)? What if the fully developed complex biblical Story is true and that the suffering of the innocent (like the suffering of Jesus Christ) is part of God's redeeming work? What if the completion of that holy, gracious and glorious purpose is so grand and glorious that it makes all the pain worth it? What if in this case "the end justifies the means"? What if even the worm that bores into the eye of a little child serves a purpose so marvellous that God himself had to come in Jesus Christ to tell us about it? What if all these parasites and all this trouble are part of a great tragedy involving both God and us? What if this a tragedy that he is working to serve his own holy and gracious purpose? A purpose which is to bless the cosmos and save us from our sin as well as our suffering and to bring us to eternal life that is brimful of life?
(You might find Celebrating the Wrath of God helpful.)
Email ThisBlogThis!Share to TwitterShare to FacebookShare to Pinterest

Matthew: He Taught As One Having Authority (7:28-29) by Mark Copeland

Matthew: Building To Withstand The Storms (7:24-27) by Mark Copeland