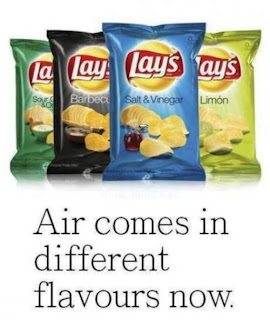 I want it known that I LIKE Lays potato chips!!!  What irks me is that they all (except Pringles) market them by weight in oversize bags!!!!  When you buy potato chips you always think you are getting more than you actually are.  Now, I have known for decades that potato chips are sold this way, but the optical illusion works every time.  It isn't until I actually lift the bag to place it into the cart that I remember what is going on.  If Madison Avenue is good at this, Satan is better; trying to trick us at every turn; deception at its finest.  When is the Bible NOT THE BIBLE?  When someone changes the words to paraphrase what the Bible means what it says to what some "expert" says it means. This can be overcome if we ALL do our part and build one another up to withstand all the trickery that Satan can come up with....

Ephesians, Chapter 4
11 He gave some to be apostles; and some, prophets; and some, evangelists; and some, shepherds and teachers; 12 for the perfecting of the saints, to the work of serving, to the building up of the body of Christ;  13 until we all attain to the unity of the faith, and of the knowledge of the Son of God, to a full grown man, to the measure of the stature of the fullness of Christ;  14 that we may no longer be children, tossed back and forth and carried about with every wind of doctrine, by the trickery of men, in craftiness, after the wiles of error; 15 but speaking truth in love, we may grow up in all things into him, who is the head, Christ;  16 from whom all the body, being fitted and knit together through that which every joint supplies, according to the working in measure of each individual part, makes the body increase to the building up of itself in love.

Do you rely on some professional to tell you what to believe in matters of religion?  If so, then you are in real trouble!!!!  Study The Bible yourself; spend time learning the book and you will know what it says for yourself!!!!!  A good place to start is with the major things that you believe; write them down on a piece of paper and ask yourself: Do I have Book, Chapter and Verse for what I know is true.  Then, before you look them up, ask yourself:  Is my Bible a literal translation of the original languages or someones paraphrase?  Some of the more literal translations are:  Young's Literal, LITV, KJV3, Darby Bible and the American Standard Version of 1901.  Two others of note are... Rotherham's Emphasized Bible and The Companion Bible by Bullinger.  Bible "light" is NOT THE WAY TO GO!!!  If you have a problem understanding something, compare several versions and THINK.  Or you could use an interlinear Bible or even my own "Composite Bible" (compositebible.com).  Whatever you do, realize that people are tricky and will try to convince you that their belief is the ONLY WAY TO BELIEVE.  Don't do it, THINK FOR YOURSELF!!!!
Email ThisBlogThis!Share to TwitterShare to FacebookShare to Pinterest

"THE EPISTLE TO THE ROMANS" Chapter One by Mark Copeland