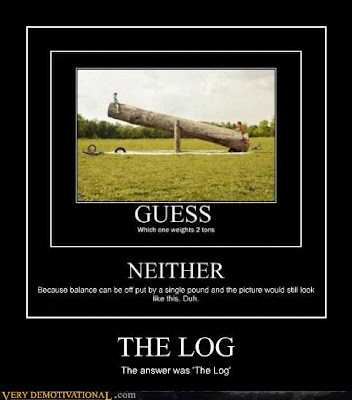 Its human nature to complicate things.  I really don't know the "why", but we do!!!  The LOG is the answer, but could the original question mean...which side weighs two tons?  Then the answer would be much harder, as the NEITHER would be closer, but the true answer then would be complicated by not only the balancing of the log halves, but also the weight of its riders.  Picky, right?  Well sometimes you have to be.  Here is a prime example from the Scriptures...

Galatians, Chapter 3
13 Christ redeemed us from the curse of the law, having become a curse for us. For it is written, “Cursed is everyone who hangs on a tree,”  14 that the blessing of Abraham might come on the Gentiles through Christ Jesus; that we might receive the promise of the Spirit through faith.  15 Brothers, speaking of human terms, though it is only a man’s covenant, yet when it has been confirmed, no one makes it void, or adds to it.  16 Now the promises were spoken to Abraham and to his seed. He doesn’t say, “To seeds,” as of many, but as of one, “To your seed,” which is Christ.  17 Now I say this. A covenant confirmed beforehand by God in Christ, the law, which came four hundred thirty years after, does not annul, so as to make the promise of no effect.  18 For if the inheritance is of the law, it is no more of promise; but God has granted it to Abraham by promise.

No, I didn't pick this passage based on verse 13, but it does make things a bit more interesting, though.  Verse 16 was the reason and the message is simple: CHRIST!!! The Jews were given the LAW to obey, but the promise to Abraham superseded it by hundreds of years.  Life can get confusing, but somehow faith seems to always find the correct answer.  By the way, I really do think the correct answer is the LOG!!!!
Email ThisBlogThis!Share to TwitterShare to FacebookShare to Pinterest

Psa 58:1 Do you indeed speak righteousness, silent ones? Do you judge blamelessly, you sons of men?
Psa 58:2 No, in your heart you plot injustice. You measure out the violence of your hands in the earth.
Psa 58:3 The wicked go astray from the womb. They are wayward as soon as they are born, speaking lies.
Psa 58:4 Their poison is like the poison of a snake; like a deaf cobra that stops its ear,
Psa 58:5 which doesn't listen to the voice of charmers, no matter how skillful the charmer may be.
Psa 58:6 Break their teeth, God, in their mouth. Break out the great teeth of the young lions, Yahweh.
Psa 58:7 Let them vanish as water that flows away. When they draw the bow, let their arrows be made blunt.
Psa 58:8 Let them be like a snail which melts and passes away, like the stillborn child, who has not seen the sun.
Psa 58:9 Before your pots can feel the heat of the thorns, he will sweep away the green and the burning alike.
Psa 58:10 The righteous shall rejoice when he sees the vengeance. He shall wash his feet in the blood of the wicked;
Psa 58:11 so that men shall say, "Most certainly there is a reward for the righteous. Most certainly there is a God who judges the earth."
Psa 59:1 Deliver me from my enemies, my God. Set me on high from those who rise up against me.
Psa 59:2 Deliver me from the workers of iniquity. Save me from the bloodthirsty men.
Psa 59:3 For, behold, they lie in wait for my soul. The mighty gather themselves together against me, not for my disobedience, nor for my sin, Yahweh.
Psa 59:4 I have done no wrong, yet they are ready to attack me. Rise up, behold, and help me!
Psa 59:5 You, Yahweh God of Armies, the God of Israel, rouse yourself to punish the nations. Show no mercy to the wicked traitors. Selah.
Psa 59:6 They return at evening, howling like dogs, and prowl around the city.
Psa 59:7 Behold, they spew with their mouth. Swords are in their lips, "For," they say, "who hears us?"
Psa 59:8 But you, Yahweh, laugh at them. You scoff at all the nations.
Psa 59:9 Oh, my Strength, I watch for you, for God is my high tower.
Psa 59:10 My God will go before me with his loving kindness. God will let me look at my enemies in triumph.
Psa 59:11 Don't kill them, or my people may forget. Scatter them by your power, and bring them down, Lord our shield.
Psa 59:12 For the sin of their mouth, and the words of their lips, let them be caught in their pride, for the curses and lies which they utter.
Psa 59:13 Consume them in wrath. Consume them, and they will be no more. Let them know that God rules in Jacob, to the ends of the earth. Selah.
Psa 59:14 At evening let them return. Let them howl like a dog, and go around the city.
Psa 59:15 They shall wander up and down for food, and wait all night if they aren't satisfied.
Psa 59:16 But I will sing of your strength. Yes, I will sing aloud of your loving kindness in the morning. For you have been my high tower, a refuge in the day of my distress.
Psa 59:17 To you, my strength, I will sing praises. For God is my high tower, the God of my mercy.
Psa 60:1 God, you have rejected us. You have broken us down. You have been angry. Restore us, again.
Psa 60:2 You have made the land tremble. You have torn it. Mend its fractures, for it quakes.
Psa 60:3 You have shown your people hard things. You have made us drink the wine that makes us stagger.
Psa 60:4 You have given a banner to those who fear you, that it may be displayed because of the truth. Selah.
Psa 60:5 So that your beloved may be delivered, save with your right hand, and answer us.
Psa 60:6 God has spoken from his sanctuary: "I will triumph. I will divide Shechem, and measure out the valley of Succoth.
Psa 60:7 Gilead is mine, and Manasseh is mine. Ephraim also is the defense of my head. Judah is my scepter.
Psa 60:8 Moab is my wash basin. I will throw my shoe on Edom. I shout in triumph over Philistia."
Psa 60:9 Who will bring me into the strong city? Who has led me to Edom?
Psa 60:10 Haven't you, God, rejected us? You don't go out with our armies, God.
Psa 60:11 Give us help against the adversary, for the help of man is vain.
Psa 60:12 Through God we shall do valiantly, for it is he who will tread down our adversaries.

"THE FIRST EPISTLE TO TIMOTHY" Chapter Six by Mark Copeland