Not all babies are small 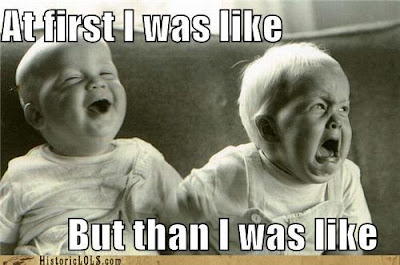 
1Ti 1:1 Paul, an apostle of Christ Jesus according to the commandment of God our Savior, and Christ Jesus our hope;
1Ti 1:2 to Timothy, my true child in faith: Grace, mercy, and peace, from God our Father and Christ Jesus our Lord.
1Ti 1:3 As I urged you when I was going into Macedonia, stay at Ephesus that you might command certain men not to teach a different doctrine,
1Ti 1:4 neither to pay attention to myths and endless genealogies, which cause disputes, rather than God's stewardship, which is in faith--
1Ti 1:5 but the goal of this command is love, out of a pure heart and a good conscience and unfeigned faith;
1Ti 1:6 from which things some, having missed the mark, have turned aside to vain talking;
1Ti 1:7 desiring to be teachers of the law, though they understand neither what they say, nor about what they strongly affirm.
1Ti 1:8 But we know that the law is good, if a man uses it lawfully,
1Ti 1:9 as knowing this, that law is not made for a righteous man, but for the lawless and insubordinate, for the ungodly and sinners, for the unholy and profane, for murderers of fathers and murderers of mothers, for manslayers,
1Ti 1:10 for the sexually immoral, for homosexuals, for slave-traders, for liars, for perjurers, and for any other thing contrary to the sound doctrine;
1Ti 1:11 according to the Good News of the glory of the blessed God, which was committed to my trust.
1Ti 1:12 And I thank him who enabled me, Christ Jesus our Lord, because he counted me faithful, appointing me to service;
1Ti 1:13 although I was before a blasphemer, a persecutor, and insolent. However, I obtained mercy, because I did it ignorantly in unbelief.
1Ti 1:14 The grace of our Lord abounded exceedingly with faith and love which is in Christ Jesus.
1Ti 1:15 The saying is faithful and worthy of all acceptance, that Christ Jesus came into the world to save sinners; of whom I am chief.
1Ti 1:16 However, for this cause I obtained mercy, that in me first, Jesus Christ might display all his patience, for an example of those who were going to believe in him for eternal life.
1Ti 1:17 Now to the King eternal, immortal, invisible, to God who alone is wise, be honor and glory forever and ever. Amen.
1Ti 1:18 This instruction I commit to you, my child Timothy, according to the prophecies which led the way to you, that by them you may wage the good warfare;
1Ti 1:19 holding faith and a good conscience; which some having thrust away made a shipwreck concerning the faith;
1Ti 1:20 of whom is Hymenaeus and Alexander; whom I delivered to Satan, that they might be taught not to blaspheme.