Too many brains, not enough sense! 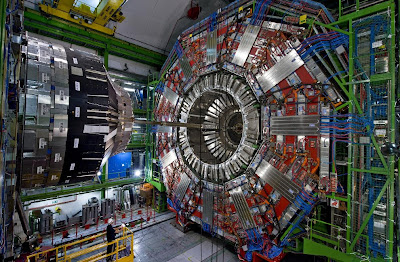 This complicated looking machine is part of The Large Hadron Collider that went on line November 20. It is located near Geneva, Switzerland and has a circumference of 17 miles. At a cost of $10 BILLION dollars it is one very expensive machine indeed. Why do this? To find out what happened at the beginning of the universe, that's why. Scientists are looking for an explanation of how mass formed in the universe and specifically are looking for the Higgs Boson particle, commonly referred to as the "God particle". When I looked all this up on Wikipeda, I was astounded by the brilliance of the work, much of which is way beyond my little mind. But, what bothers me the most is the cost of all this!!! if they wanted to find out how the universe was created, all they had to do was to open to the first page of the Bible.


Genesis 1:1 WEB (R)
(1) In the beginning God created the heavens and the earth.


Too many brains, not enough sense! Just think of how many Bibles could be bought with one tenth of the CERN project! But, as usual, that would be far too simple a solution, instead waste BILLIONS to get the details. Now if the other 9 BILLION was spent on something really valuable... say FOOD, for instance, our world would be a whole lot better off!!!
Email ThisBlogThis!Share to TwitterShare to FacebookShare to Pinterest
Newer Posts Older Posts Home
Subscribe to: Posts (Atom)