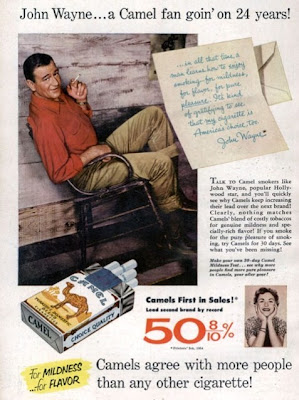 If you have ever been to Hill's "2 minute" restaurant in Zephryhills, Florida, this ad will take on new meaning. An oriental gentleman named Kurt runs the place and all over the walls are every sort of picture of the "Duke". This gives the place a certain feel of homeyness which is further enhanced by Kurt and his staff. Those in retail could certainly learn a lot from him. But, this picture of John Wayne teaches something that you would be better off not learning -- smoking. Sometimes success in life is learning not to do everything; even if the rich and / or famous tell you its OK. A prime example of this is a situation the Apostle Paul found himself in. Read on for the rest of the story.
Galatians 2
2 Then after a period of fourteen years I went up again to Jerusalem with Barnabas, taking Titus also with me.2 I went up by revelation, and I laid before them the Good News which I preach among the Gentiles, but privately before those who were respected, for fear that I might be running, or had run, in vain.3 But not even Titus, who was with me, being a Greek, was compelled to be circumcised.4 This was because of the false brothers secretly brought in, who stole in to spy out our liberty which we have in Christ Jesus, that they might bring us into bondage;5 to whom we gave no place in the way of subjection, not for an hour, that the truth of the Good News might continue with you.6 But from those who were reputed to be important (whatever they were, it makes no difference to me; God doesn't show partiality to man)—they, I say, who were respected imparted nothing to me,7 but to the contrary, when they saw that I had been entrusted with the Good News for the uncircumcision, even as Peter with the Good News for the circumcision8 (for he who appointed Peter to the apostleship of the circumcision appointed me also to the Gentiles);9 and when they perceived the grace that was given to me, James and Cephas and John, they who were reputed to be pillars, gave to me and Barnabas the right hand of fellowship, that we should go to the Gentiles, and they to the circumcision.10 They only asked us to remember the poor—which very thing I was also zealous to do.11 But when Peter came to Antioch, I resisted him to the face, because he stood condemned.12 For before some people came from James, he ate with the Gentiles. But when they came, he drew back and separated himself, fearing those who were of the circumcision.13 And the rest of the Jews joined him in his hypocrisy; so that even Barnabas was carried away with their hypocrisy.14 But when I saw that they didn't walk uprightly according to the truth of the Good News, I said to Peter before them all, "If you, being a Jew, live as the Gentiles do, and not as the Jews do, why do you compel the Gentiles to live as the Jews do?15 "We, being Jews by nature, and not Gentile sinners,16 yet knowing that a man is not justified by the works of the law but through the faith of Jesus Christ, even we believed in Christ Jesus, that we might be justified by faith in Christ, and not by the works of the law, because no flesh will be justified by the works of the law.17 But if, while we sought to be justified in Christ, we ourselves also were found sinners, is Christ a servant of sin? Certainly not!18 For if I build up again those things which I destroyed, I prove myself a law-breaker.19 For I, through the law, died to the law, that I might live to God.20 I have been crucified with Christ, and it is no longer I that live, but Christ living in me. That life which I now live in the flesh, I live by faith in the Son of God, who loved me, and gave himself up for me.21 I don't make void the grace of God. For if righteousness is through the law, then Christ died for nothing!" WEB
Law was as good as far as it went, but sinful man couldn't keep it; so what was the point? Grace accomplished the point of the Law (to be right with God) and so what was the value of keeping the Law again? The answer is: no point at all! Even if somebody important like Peter succumbed to pressure that doesn't mean its the right thing to do. Paul sets the matter straight and shows the supremacy of Grace over Law. What does this have to do with today? Look at the superstars of today and the lifestyles they promote? Just because Ellen Degeneres or Oprah or Cher or Madonna lives a certain way doesn't mean that its the RIGHT WAY. John Wayne may have promoted Camels 40 years ago, but smoking killed then and does still. Be like Paul, look to Jesus for the answers; besides, Jesus is more famous than the "Duke" anyway.
Email ThisBlogThis!Share to TwitterShare to FacebookShare to Pinterest
Newer Posts Older Posts Home
Subscribe to: Posts (Atom)