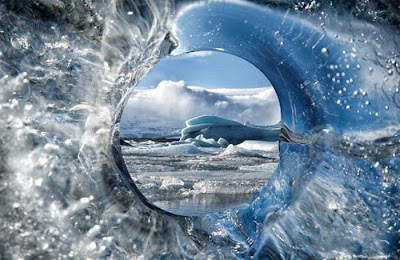 What is it? Where is it? When is it?  These three things came to mind as I viewed this for the first time.  I really don't know; but, I CAN guess.  First, this looks like a piece of ice that someone has fired a bullet through.  Second, perhaps it is on a high plateau somewhere or maybe on the flatted out top of some mountain.  By the looks of it, I would say its in the far North, someplace where its very, very cold!!! When is it? Tough question; Winter, probably, or it just might be very early Spring.  However, if this is trick photography, then it could be a picture taken just fractions of a second after a bullet has passed though a piece of ice to form this hole.  To me, this represents a target; something to attain to.  When I thought of this for a few moments, I remembered the passage from the book of Joshua that I read a few days ago...

6 “Be strong and courageous; for you shall cause this people to inherit the land which I swore to their fathers to give them.  7 Only be strong and very courageous, to observe to do according to all the law, which Moses my servant commanded you. Don’t turn from it to the right hand or to the left, that you may have good success wherever you go. 8 This book of the law shall not depart out of your mouth, but you shall meditate on it day and night, that you may observe to do according to all that is written therein: for then you shall make your way prosperous, and then you shall have good success.

The God of heaven spoke to Moses servant Joshua (who was his successor) to give him encouragement.  And he needed it badly!!!  Can you imagine taking over leadership of about a million people that had been led by MOSES????  Talk about your daunting tasks.  However, remember, this is GOD talking!!!!  And he tells him HOW TO DO IT!!!  Basically, remember that I am with you, so be strong and courageous.  Remember also, to think of the law that I gave to Moses.  Do these things and you will be right on target.  Bulls eye!!!!!

"THE GOSPEL OF MATTHEW" Chapter Twenty-Four by Mark Copeland