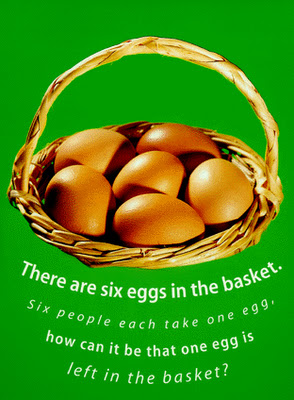 Huh?  How can this be?  At first this does present a problem, but if you think about it, this is really no problem at all.  This reminds me of the current controversy about the end of the world (supposed to happen at 6 pm today).  Jesus said that no one would know the time or the hour of the judgment, but someone is again putting a date on it.  Like the passage below, it is a problem for some...
1 Thessalonians 4:13-18 (WEB)


13) But we don’t want you to be ignorant, brothers, concerning those who have fallen asleep, so that you don’t grieve like the rest, who have no hope.

14) For if we believe that Jesus died and rose again, even so God will bring with him those who have fallen asleep in Jesus.

15) For this we tell you by the word of the Lord, that we who are alive, who are left to the coming of the Lord, will in no way precede those who have fallen asleep.

16) For the Lord himself will descend from heaven with a shout, with the voice of the archangel, and with God’s trumpet. The dead in Christ will rise first,

17) then we who are alive, who are left, will be caught up together with them in the clouds, to meet the Lord in the air. So we will be with the Lord forever.

18) Therefore comfort one another with these words.


Context: There were those in the first century who were telling Christians that the resurrection had already occurred, so that all was lost.  So, Paul responds with these comments.  If the end is here, so what?  If you are a Christian, you are prepared, if you are not, its too late and you are doomed.  Worrying will do you no good, only action will.  Quick, read Acts chapter two and do something about it; problem solved.  As far as the picture puzzle is concerned... the last person took the basket and the egg.  So much for problems.
Email ThisBlogThis!Share to TwitterShare to FacebookShare to Pinterest

Jos 23:1 It happened after many days, when Yahweh had given rest to Israel from their enemies all around, and Joshua was old and well advanced in years,

Jos 23:4 Behold, I have allotted to you these nations that remain, to be an inheritance for your tribes, from the Jordan, with all the nations that I have cut off, even to the great sea toward the going down of the sun.

Jos 23:6 Therefore be very courageous to keep and to do all that is written in the book of the law of Moses, that you not turn aside from it to the right hand or to the left;

Jos 23:7 that you not come among these nations, these that remain among you; neither make mention of the name of their gods, nor cause to swear by them, neither serve them, nor bow down yourselves to them;

Jos 23:8 but hold fast to Yahweh your God, as you have done to this day.

Jos 23:9 For Yahweh has driven great and strong nations out from before you. But as for you, no man has stood before you to this day.

Jos 23:10 One man of you shall chase a thousand; for it is Yahweh your God who fights for you, as he spoke to you.

Jos 23:11 Take good heed therefore to yourselves, that you love Yahweh your God.

Jos 23:12 Else if you do at all go back, and hold fast to the remnant of these nations, even these who remain among you, and make marriages with them, and go in to them, and they to you;

Jos 23:13 know for a certainty that Yahweh your God will no longer drive these nations from out of your sight; but they shall be a snare and a trap to you, a scourge in your sides, and thorns in your eyes, until you perish from off this good land which Yahweh your God has given you.

Jos 23:16 when you disobey the covenant of Yahweh your God, which he commanded you, and go and serve other gods, and bow down yourselves to them. Then the anger of Yahweh will be kindled against you, and you will perish quickly from off the good land which he has given to you."

Jos 24:1 Joshua gathered all the tribes of Israel to Shechem, and called for the elders of Israel, for their heads, for their judges, and for their officers; and they presented themselves before God.

Jos 24:2 Joshua said to all the people, "Thus says Yahweh, the God of Israel, 'Your fathers lived of old time beyond the River, even Terah, the father of Abraham, and the father of Nahor: and they served other gods.

Jos 24:3 I took your father Abraham from beyond the River, and led him throughout all the land of Canaan, and multiplied his seed, and gave him Isaac.

Jos 24:4 I gave to Isaac Jacob and Esau: and I gave to Esau Mount Seir, to possess it. Jacob and his children went down into Egypt.

Jos 24:5 I sent Moses and Aaron, and I plagued Egypt, according to that which I did in its midst: and afterward I brought you out.

Jos 24:6 I brought your fathers out of Egypt: and you came to the sea. The Egyptians pursued after your fathers with chariots and with horsemen to the Red Sea.

Jos 24:7 When they cried out to Yahweh, he put darkness between you and the Egyptians, and brought the sea on them, and covered them; and your eyes saw what I did in Egypt: and you lived in the wilderness many days.

Jos 24:8 I brought you into the land of the Amorites, that lived beyond the Jordan: and they fought with you; and I gave them into your hand. You possessed their land; and I destroyed them from before you.

Jos 24:9 Then Balak the son of Zippor, king of Moab, arose and fought against Israel. He sent and called Balaam the son of Beor to curse you;

Jos 24:10 but I would not listen to Balaam; therefore he blessed you still. So I delivered you out of his hand.

Jos 24:11 You went over the Jordan, and came to Jericho. The men of Jericho fought against you, the Amorite, the Perizzite, the Canaanite, the Hittite, the Girgashite, the Hivite, and the Jebusite; and I delivered them into your hand.

Jos 24:12 I sent the hornet before you, which drove them out from before you, even the two kings of the Amorites; not with your sword, nor with your bow.

Jos 24:14 Now therefore fear Yahweh, and serve him in sincerity and in truth. Put away the gods which your fathers served beyond the River, in Egypt; and serve Yahweh.

Jos 24:15 If it seems evil to you to serve Yahweh, choose this day whom you will serve; whether the gods which your fathers served that were beyond the River, or the gods of the Amorites, in whose land you dwell: but as for me and my house, we will serve Yahweh."

Jos 24:16 The people answered, "Far be it from us that we should forsake Yahweh, to serve other gods;

Jos 24:17 for it is Yahweh our God who brought us and our fathers up out of the land of Egypt, from the house of bondage, and who did those great signs in our sight, and preserved us in all the way in which we went, and among all the peoples through the midst of whom we passed.

Jos 24:18 Yahweh drove out from before us all the peoples, even the Amorites who lived in the land. Therefore we also will serve Yahweh; for he is our God."

Jos 24:19 Joshua said to the people, "You can't serve Yahweh; for he is a holy God. He is a jealous God. He will not forgive your disobedience nor your sins.

Jos 24:20 If you forsake Yahweh, and serve foreign gods, then he will turn and do you evil, and consume you, after he has done you good."

Jos 24:22 Joshua said to the people, "You are witnesses against yourselves that you have chosen Yahweh yourselves, to serve him." They said, "We are witnesses."

Jos 24:23 "Now therefore put away the foreign gods which are among you, and incline your heart to Yahweh, the God of Israel."

Jos 24:24 The people said to Joshua, "We will serve Yahweh our God, and we will listen to his voice."

Jos 24:25 So Joshua made a covenant with the people that day, and made for them a statute and an ordinance in Shechem.

Jos 24:26 Joshua wrote these words in the book of the law of God; and he took a great stone, and set it up there under the oak that was by the sanctuary of Yahweh.

Jos 24:28 So Joshua sent the people away, every man to his inheritance.

Jos 24:29 It happened after these things, that Joshua the son of Nun, the servant of Yahweh, died, being one hundred and ten years old.

Jos 24:30 They buried him in the border of his inheritance in Timnathserah, which is in the hill country of Ephraim, on the north of the mountain of Gaash.

Jos 24:32 They buried the bones of Joseph, which the children of Israel brought up out of Egypt, in Shechem, in the parcel of ground which Jacob bought of the sons of Hamor the father of Shechem for a hundred pieces of money. They became the inheritance of the children of Joseph.

Jos 24:33 Eleazar the son of Aaron died. They buried him in the hill of Phinehas his son, which was given him in the hill country of Ephraim.
Email ThisBlogThis!Share to TwitterShare to FacebookShare to Pinterest
Newer Posts Older Posts Home
Subscribe to: Posts (Atom)