Did I hear a bbaaaahh? 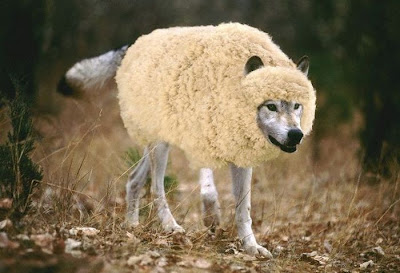 This animal is dressed up to be something other than it really is. No, it is NOT a sheep even though it looks something like one. Lately I have seen a lot of ads on TV with politicians claiming all sorts of things. Past experience has taught me that they lie and even when you think they are telling the truth, they are lying. Politics is so rampant with liars, I have long given up on the "best choice", rather I tend to vote for the one who will do the least damage. But I couldn't help but ask myself, what about Christians? How do we know who is lying? Here is one verse that gives a little insight.
1 John 2:22 (WEB)
22) Who is the liar but he who denies that Jesus is the Christ? This is the Antichrist, he who denies the Father and the Son.

If someone says that Jesus is NOT the Christ, then he is a liar. There are other tests in Scripture, but this is a good place to start. Politicians are a lost cause though; frankly, I give up. From now on, every time is see an ad on TV I will just pretend I hear a bbaaaahhh and hope for the best.
Email ThisBlogThis!Share to TwitterShare to FacebookShare to Pinterest

Is the light on or is it off? 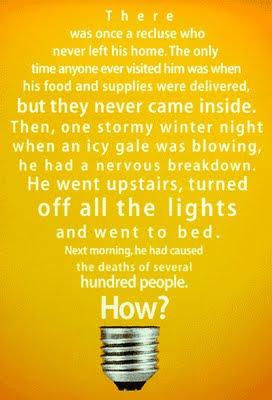 I like questions like the one this picture raises because it makes me think. And after the age of 55, thinking is a GOOD THING!! When I looked at the picture, one word seemed to jump right out at me and of course it was the last one; HOW. How did one man cause the death of so many? Sometimes you can't think of an answer right away, so you just sit there and try to absorb the overall picture. This scenario brought to mind the following passage from the book of Acts. I hope you will read it all to get the overview of the situation.
Acts 19:1-20 (WEB)
1) It happened that, while Apollos was at Corinth, Paul, having passed through the upper country, came to Ephesus, and found certain disciples.
2) He said to them, “Did you receive the Holy Spirit when you believed?” They said to him, “No, we haven’t even heard that there is a Holy Spirit.”
3) He said, “Into what then were you baptized?” They said, “Into John’s baptism.”
4) Paul said, “John indeed baptized with the baptism of repentance, saying to the people that they should believe in the one who would come after him, that is, in Jesus.”
5) When they heard this, they were baptized in the name of the Lord Jesus.
6) When Paul had laid his hands on them, the Holy Spirit came on them, and they spoke with other languages and prophesied.
7) They were about twelve men in all.
8) He entered into the synagogue, and spoke boldly for a period of three months, reasoning and persuading about the things concerning the Kingdom of God.
9) But when some were hardened and disobedient, speaking evil of the Way before the multitude, he departed from them, and separated the disciples, reasoning daily in the school of Tyrannus.
10) This continued for two years, so that all those who lived in Asia heard the word of the Lord Jesus, both Jews and Greeks.
11) God worked special miracles by the hands of Paul,
12) so that even handkerchiefs or aprons were carried away from his body to the sick, and the evil spirits went out.
13) But some of the itinerant Jews, exorcists, took on themselves to invoke over those who had the evil spirits the name of the Lord Jesus, saying, “We adjure you by Jesus whom Paul preaches.”
14) There were seven sons of one Sceva, a Jewish chief priest, who did this.
15) The evil spirit answered, “Jesus I know, and Paul I know, but who are you?”
16) The man in whom the evil spirit was leaped on them, and overpowered them, and prevailed against them, so that they fled out of that house naked and wounded.
17) This became known to all, both Jews and Greeks, who lived at Ephesus. Fear fell on them all, and the name of the Lord Jesus was magnified.
18) Many also of those who had believed came, confessing, and declaring their deeds.
19) Many of those who practiced magical arts brought their books together and burned them in the sight of all. They counted their price, and found it to be fifty thousand pieces of silver.
20) So the word of the Lord was growing and becoming mighty.
(Acts 19:1-20, WEB)

Overview: The book of Acts is really the practices of the Apostles who are empowered by God's Holy Spirit. Miracles are happening; laying on of hands, healings, spirit attestations. And people are beginning to realize that what is happening is the genuine article; they are turning their lives around. God's testimony (His Word) is being acknowledged. Suddenly a light has turned on in the minds of many people and they realize that this is the truth. Fantastic stuff!!! How did this come about? How does it work? Haven't a clue, but I know it is true, because if it were not, the apostles would have been discredited immediately. Speaking of light, the answer to the problem posed by the picture is that the man who shut the lights off was a keeper of a lighthouse. Think the light that you are given to show forth doesn't matter, try turning it off and see how you affect people's lives; it could be a matter of life and death. You may not be an apostle or a lighthouse keeper, but your life does matter. Any light bulbs suddenly turn on?

By the way, for those of you who may be counting, this is post number 600. I would like to thank all of you who have supported and encouraged me in this work. Only 400 more to go to reach the first goal...