Roses, reflection and just a bit of water... 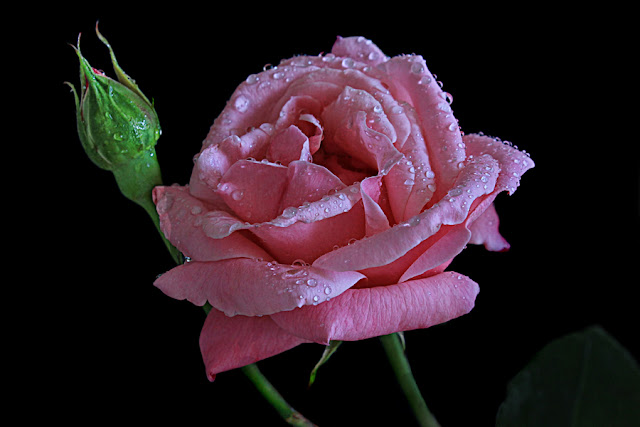 Now, this is one beautiful rose. The Rose is known for its beauty, fragrance and delicate character.  Although my last name is Rose, I have none of these characteristics.  Only the females in my family could be characterized by these descriptions.  However, I was interested in this picture because of the recent holiday (Valentine's day) and my own last name, so I decided to look up something about them in Wikipedia....

From Wikipedia, the free encyclopedia
For other uses, see Rose (disambiguation).

A rose is a woody perennial of the genus Rosa, within the family Rosaceae. There are over 100 species. They form a group of plants that can be erect shrubs, climbing or trailing with stems that are often armed with sharp prickles. Flowers vary in size and shape and are usually large and showy, in colours ranging from white through yellows and reds. Most species are native to Asia, with smaller numbers native to Europe, North America, and northwest Africa. Species, cultivars and hybrids are all widely grown for their beauty and often are fragrant. Rose plants range in size from compact, miniature roses, to climbers that can reach 7 meters in height. Different species hybridize easily, and this has been used in the development of the wide range of garden roses.[1]
The name rose comes from French, itself from Latin rosa, which was perhaps borrowed from Oscan, from Greek ρόδον rhódon (Aeolicβρόδον wródon), itself borrowed from Old Persian wrd- (wurdi), related to Avestan varəδa, Sogdian ward, Parthian wâr.[2][3] Cross-section through a developing rose hip

Rose leaflets
The leaves are borne alternately on the stem. In most species they are 5 to 15 centimetres (2.0 to 5.9 in) long,pinnate, with (3–) 5–9 (–13) leaflets and basal stipules; the leaflets usually have a serrated margin, and often a few small prickles on the underside of the stem. Most roses are deciduous but a few (particularly from South east Asia) are evergreen or nearly so.

The hybrid garden rose "Amber Flush"
The flowers of most species have five petals, with the exception of Rosa sericea, which usually has only four. Each petal is divided into two distinct lobes and is usually white or pink, though in a few species yellow or red. Beneath the petals are five sepals (or in the case of some Rosa sericea, four). These may be long enough to be visible when viewed from above and appear as green points alternating with the rounded petals. There are multiplesuperior ovaries that develop into achenes.[4] Roses are insect-pollinated in nature.
The aggregate fruit of the rose is a berry-like structure called a rose hip. Many of the domestic cultivars do not produce hips, as the flowers are so tightly petalled that they do not provide access for pollination. The hips of most species are red, but a few (e.g. Rosa pimpinellifolia) have dark purple to black hips. Each hip comprises an outer fleshy layer, the hypanthium, which contains 5–160 "seeds" (technically dry single-seeded fruits called achenes) embedded in a matrix of fine, but stiff, hairs. Rose hips of some species, especially the Dog Rose (Rosa canina) and Rugosa Rose (Rosa rugosa), are very rich in vitamin C, among the richest sources of any plant. The hips are eaten by fruit-eating birds such as thrushes and waxwings, which then disperse the seeds in their droppings. Some birds, particularly finches, also eat the seeds.

Rose thorns are actually prickles - outgrowths of the epidermis.
While the sharp objects along a rose stem are commonly called "thorns", they are technically prickles — outgrowths of the epidermis (the outer layer of tissue of the stem). (True thorns, as produced by e.g. Citrus or Pyracantha, are modified stems, which always originate at a node and which have nodes and internodes along the length of the thorn itself.) Rose prickles are typically sickle-shaped hooks, which aid the rose in hanging onto other vegetation when growing over it. Some species such as Rosa rugosa and Rosa pimpinellifolia have densely packed straight prickles, probably an adaptation to reduce browsing by animals, but also possibly an adaptation to trap wind-blown sand and so reduce erosion and protect their roots (both of these species grow naturally on coastal sand dunes). Despite the presence of prickles, roses are frequently browsed by deer. A few species of roses have only vestigial prickles that have no points. Roses are best known as ornamental plants grown for their flowers in the garden and sometimes indoors. They have been also used for commercial perfumery and commercial cut flower crops. Some are used as landscape plants, for hedging and for other utilitarian purposes such as game cover and slope stabilization. They also have minor medicinal uses.

Hybrid Tea cultivar 'Mrs. Herbert Stevens'
Ornamental roses have been cultivated for millennia, with the earliest known cultivation known to date from at least 500 BC in Mediterranean countries, Persia, and China.[5] Many thousands of rose hybrids and cultivars have been bred and selectedh for garden use as flowering plants. Most are double-flowered with many or all of the stamens having mutated into additional petals.
In the early 19th century the Empress Josephine of France patronized the development of rose breeding at her gardens at Malmaison. As long ago as 1840 a collection numbering over one thousand different cultivars, varieties and species was possible when a rosarium was planted by Loddiges nursery for Abney Park Cemetery, an early Victorian garden cemetery and arboretum in England.
A few species and hybrids are grown for non-floral ornamental use. Among these are those grown for prominent hips, such as the flagon shaped hips of Rosa moyesii. Sometimes even the thorns can be treated as an attraction or curiosity, such as with Rosa sericea. Bouquet of pink roses
Roses are a popular crop for both domestic and commercial cut flowers. Generally they are harvested and cut when in bud, and held in refrigerated conditions until ready for display at their point of sale.
In temperate climates, cut roses are often grown in glasshouses, and in warmer countries they may also be grown under cover in order to ensure that the flowers are not damaged by weather and that pests and disease control can be carried out effectively. Significant quantities are grown in some tropical countries, and these are shipped by air to markets across the world.[6]

Main articles: Rose oil, Attar of roses, and Rose water
Rose perfumes are made from attar of roses or rose oil, which is a mixture of volatile essential oils obtained by steam distilling the crushed petals of roses. An associated product is rose water which is used for cooking, cosmetics, medicine and in religious practices. The production technique originated in Persia then spread through Arabia and India, and more recently into eastern Europe. In Bulgaria, Iran and Germany, damask roses (Rosa damascena 'Trigintipetala') are used. In other parts of the world Rosa centifolia is commonly used. The oil is transparent pale yellow or yellow-grey in colour. 'Rose Absolute' is solvent-extracted with hexane and produces a darker oil, dark yellow to orange in colour. The weight of oil extracted is about one three-thousandth to one six-thousandth of the weight of the flowers; for example, about two thousand flowers are required to produce one gram of oil.

Geraniol (C10H18O)
The main constituents of attar of roses are the fragrant alcohols geraniol and l-citronellol and rose camphor, an odorless solid composed ofalkanes, which separates from rose oil.[7] β-Damascenone is also a significant contributor to the scent.

Rose hips are occasionally made into jam, jelly, and marmalade, or are brewed for tea, primarily for their high vitamin C content. They are also pressed and filtered to make rose hip syrup. Rose hips are also used to produce Rose hip seed oil, which is used in skin products and some makeup products.[citation needed] Rosa caninahips
Rose petals or flower buds are sometimes used to flavour ordinary tea, or combined with other herbs to make tisanes.
In France there is much use of rose syrup, most commonly made from an extract of rose petals. In the United States, this French rose syrup is used to make rose scones and marshmallows.[citation needed]
Rose flowers are used as food, also usually as flavouring or to add their scent to food.[8] Other minor uses include candied rose petals.[9]
Rose Creams (rose flavoured fondant covered in chocolate, often topped with a crystallised rose petal) are a traditional English confectionery widely available from numerous producers in the UK.[10][11]

Roses are a favored subject in art and appear in portraits, illustrations, on stamps, as ornaments or as architectural elements. The Luxembourg born Belgian artist and botanist Pierre-Joseph Redouté is known for his detailed watercolours of flowers, particularly roses.

Renoir's painting of cabbage roses,Roses in a vase
Henri Fantin-Latour was also a prolific painter of still life, particularly flowers including roses. The Rose 'Fantin-Latour' was named after the artist.
Other impressionists including Claude Monet, Paul Cézanne and Pierre-Auguste Renoir have paintings of roses among their works.

Further information: Rose (symbolism)
The long cultural history of the rose has led to it being used often as a symbol.

Don't get the wrong idea; I am not obsessing about myself, I am just doing a bit of introspection this beautiful sunny (and chilly) morning in Florida. However, thinking about one's life can be a good thing, as can be seen from this passage from the Psalms...

Psalms, Chapter 119
57 Yahweh is my portion.
I promised to obey your words.
58 I sought your favor with my whole heart.
Be merciful to me according to your word.
59 I considered my ways,
and turned my steps to your statutes.
60 I will hurry, and not delay,
to obey your commandments.
61 The ropes of the wicked bind me,
but I won’t forget your law.
62 At midnight I will rise to give thanks to you,
because of your righteous ordinances.
63 I am a friend of all those who fear you,
of those who observe your precepts.
64 The earth is full of your loving kindness, Yahweh.
Teach me your statutes.

Romans, Chapter 2
1 Therefore you are without excuse, O man, whoever you are who judge. For in that which you judge another, you condemn yourself. For you who judge practice the same things.  2 We know that the judgment of God is according to truth against those who practice such things.  3 Do you think this, O man who judges those who practice such things, and do the same, that you will escape the judgment of God?  4 Or do you despise the riches of his goodness, forbearance, and patience, not knowing that the goodness of God leads you to repentance? 5 But according to your hardness and unrepentant heart you are treasuring up for yourself wrath in the day of wrath, revelation, and of the righteous judgment of God;  6 who “will pay back to everyone according to their works:”  7 to those who by patience in well-doing seek for glory, honor, and incorruptibility, eternal life;

So, thinking about how one leads their life can lead one to the Scriptures, cause reflection about them, gain instruction from them and ultimately change their "works".  Eternal life in heaven can be the result of this!!!  Nice thought, great example and a marvelous hope!!!  Only one thing bothers me though; did you happen to notice that the Rose in the picture at the top is ALL WET?  Hummm; I will have to think about that one...