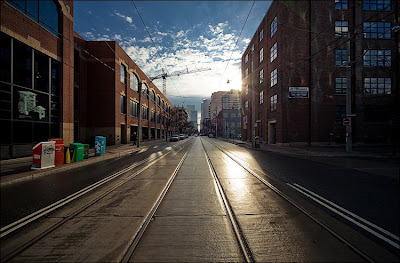 This time of year it rains in Florida and then rains again and again and again. It does stop, and when it does the air is clean, really clean. That's what this picture says to me: clean! The Earth had become full of sin and the flood had destroyed all life and then the rain stopped.
Gen 8:1-17
8 God remembered Noah, all the animals, and all the livestock that were with him in the ark; and God made a wind to pass over the earth. The waters subsided.2 The deep's fountains and the sky's windows were also stopped, and the rain from the sky was restrained.3 The waters receded from the earth continually. After the end of one hundred fifty days the waters decreased.4 The ark rested in the seventh month, on the seventeenth day of the month, on Ararat's mountains.5 The waters receded continually until the tenth month. In the tenth month, on the first day of the month, the tops of the mountains were seen.6 It happened at the end of forty days, that Noah opened the window of the ark which he had made,7 and he sent forth a raven. It went back and forth, until the waters were dried up from the earth.8 He sent forth a dove from him, to see if the waters were abated from the surface of the ground,9 but the dove found no place to rest her foot, and she returned to him into the ark; for the waters were on the surface of the whole earth. He put forth his hand, and took her, and brought her to him into the ark.10 He stayed yet another seven days; and again he sent forth the dove out of the ark.11 The dove came back to him at evening, and, behold, in her mouth was an olive leaf plucked off. So Noah knew that the waters were abated from the earth.12 He stayed yet another seven days, and sent forth the dove; and she didn't return to him any more.13 It happened in the six hundred first year, in the first month, the first day of the month, the waters were dried up from the earth. Noah removed the covering of the ark, and looked. He saw that the surface of the ground was dried.14 In the second month, on the twenty-seventh day of the month, the earth was dry.15 God spoke to Noah, saying,16 "Go forth from the ark, you, and your wife, and your sons, and your sons' wives with you.17 Bring forth with you every living thing that is with you of all flesh, including birds, livestock, and every creeping thing that creeps on the earth, that they may breed abundantly in the earth, and be fruitful, and multiply on the earth."WEB
God is patient, but there is a limit and then .... wham, judgment. After the judgment, God makes a way out, a clean slate for those who have been preserved. So it was in the days of Noah and this scenario will be repeated again. Not the flood, for God has promised not to do THAT AGAIN, but judgment is sure because sin is prevalent, almost overwhelming. Be preserved through the next cataclysm, read from 1st Peter chapter 3:20-21 and see what must be done.
Email ThisBlogThis!Share to TwitterShare to FacebookShare to Pinterest 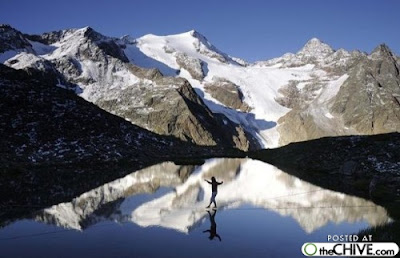 When I saw this picture I did a double-take. It seems like this tightrope walker is actually walking on the lake, but if you look closely...THERE IS A ROPE!!! How many times do we think we see things and then find out someone has tricked us. Television commercials are a great example of this; they make you want to go right out and buy their product and when you see what is really being sold.... junk (with a CAPITOL J). But what if you encountered the real thing; what WOULD YOU DO? Read these two passages from the Gospel of Mark and think about it.
Mark 4:35-41
35 On that day, when evening had come, he said to them, "Let's go over to the other side."
36 Leaving the multitude, they took him with them, even as he was, in the boat. Other small boats were also with him.
37 There arose a great wind storm, and the waves beat into the boat, so much that the boat was already filled.
38 He himself was in the stern, asleep on the cushion, and they woke him up, and told him, "Teacher, don't you care that we are dying?"
39 He awoke, and rebuked the wind, and said to the sea, "Peace! Be still!" The wind ceased, and there was a great calm.
40 He said to them, "Why are you so afraid? How is it that you have no faith?"
41 They were greatly afraid, and said to one another, "Who then is this, that even the wind and the sea obey him?"WEB
Mark 6:46-51
46 After he had taken leave of them, he went up the mountain to pray.
47 When evening had come, the boat was in the midst of the sea, and he was alone on the land.
48 Seeing them distressed in rowing, for the wind was contrary to them, about the fourth watch of the night he came to them, walking on the sea, and he would have passed by them,
49 but they, when they saw him walking on the sea, supposed that it was a ghost, and cried out;
50 for they all saw him, and were troubled. But he immediately spoke with them, and said to them, "Cheer up! It is I! Don't be afraid."
51 He got into the boat with them; and the wind ceased, and they were very amazed among themselves, and marveled;WEB
If I SAW THESE THINGS, I would probably react just like the apostles did. I would be scared and amazed and wonder who this REALLY WAS. I included two passages because at first thought I might think the sea was calmed by accident or coincidence. But Jesus exhibited two examples of power beyond that which is given to men. Two! And in case you are wondering, he could do these things because he was so perfect he COULD WALK ON WATER and also because he had the POWER OVER IT. No tricks, just deity! You might say he was "The real McCoy" and you would be right. The next step for his followers would be genuine faith (having a steadfast belief that leads to reliance) and that is the beginning of discipleship.
Email ThisBlogThis!Share to TwitterShare to FacebookShare to Pinterest
Newer Posts Older Posts Home
Subscribe to: Posts (Atom)