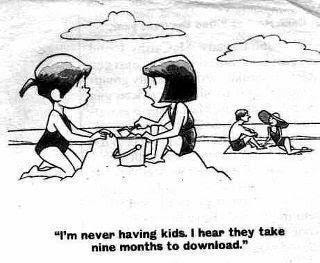 These kids are young, maybe five or six years old at most.  They are doing what kids do best:PLAY!!!  But, the picture reveals a lot about their upbringing; namely, they live in a society with computers.  Everything seems to revolve around them.... even having babies???  While we know the last part of that sentence is NOT true... still it seems that way, doesn't it???  Like it or not, we live in a culture increasingly dominated by microprocessors.  But, what happens when we read the Bible?  Do we remember its varying time-frame and cultures?  Here is an example from the book of John....

John, Chapter 9
1 As he passed by, he saw a man blind from birth.  2 His disciples asked him, “Rabbi, who sinned, this man or his parents, that he was born blind?”  3 Jesus answered, "“Neither did this man sin, nor his parents; but, that the works of God might be revealed in him.  4 I must work the works of him who sent me, while it is day. The night is coming, when no one can work.  5 While I am in the world, I am the light of the world.”"  6 When he had said this, he spat on the ground, made mud with the saliva, anointed the blind man’s eyes with the mud,  7 and said to him, "“Go, wash in the pool of Siloam”" (which means “Sent”). So he went away, washed, and came back seeing.

That people could believe that maladies came from their parents seems odd to us, but that was a common belief a couple of thousand years ago.  Also, the idea of using spittle and dirt to heal likewise seems strange.  BUT, I remember that when I was about five or six, my grandmother dipped some bread into milk and applied the mixture to my infected toenail AND IT WORKED!!!  All this to emphasize one thing: context.  Whatever you read in the Scriptures, remember the culture in the context of the chapter, book and for that matter the whole of The Word of God.   In case you are wondering..., you won't find one single reference to "downloading babies" in the whole Bible!!!  Boy, that is good news, I thought they had something to do with a cabbage patch... so much for MY CULTURE!!!

Act 18:1 After these things Paul departed from Athens, and came to Corinth.
Act 18:2 He found a certain Jew named Aquila, a man of Pontus by race, who had recently come from Italy, with his wife Priscilla, because Claudius had commanded all the Jews to depart from Rome. He came to them,
Act 18:3 and because he practiced the same trade, he lived with them and worked, for by trade they were tent makers.
Act 18:4 He reasoned in the synagogue every Sabbath, and persuaded Jews and Greeks.
Act 18:5 But when Silas and Timothy came down from Macedonia, Paul was compelled by the Spirit, testifying to the Jews that Jesus was the Christ.
Act 18:6 When they opposed him and blasphemed, he shook out his clothing and said to them, "Your blood be on your own heads! I am clean. From now on, I will go to the Gentiles!"
Act 18:7 He departed there, and went into the house of a certain man named Justus, one who worshiped God, whose house was next door to the synagogue.
Act 18:8 Crispus, the ruler of the synagogue, believed in the Lord with all his house. Many of the Corinthians, when they heard, believed and were baptized.
Act 18:9 The Lord said to Paul in the night by a vision, "Don't be afraid, but speak and don't be silent;
Act 18:10 for I am with you, and no one will attack you to harm you, for I have many people in this city."
Act 18:11 He lived there a year and six months, teaching the word of God among them.
Act 18:12 But when Gallio was proconsul of Achaia, the Jews with one accord rose up against Paul and brought him before the judgment seat,
Act 18:13 saying, "This man persuades men to worship God contrary to the law."
Act 18:14 But when Paul was about to open his mouth, Gallio said to the Jews, "If indeed it were a matter of wrong or of wicked crime, you Jews, it would be reasonable that I should bear with you;
Act 18:15 but if they are questions about words and names and your own law, look to it yourselves. For I don't want to be a judge of these matters."
Act 18:16 He drove them from the judgment seat.
Act 18:17 Then all the Greeks laid hold on Sosthenes, the ruler of the synagogue, and beat him before the judgment seat. Gallio didn't care about any of these things.
Act 18:18 Paul, having stayed after this many more days, took his leave of the brothers, and sailed from there for Syria, together with Priscilla and Aquila. He shaved his head in Cenchreae, for he had a vow.
Act 18:19 He came to Ephesus, and he left them there; but he himself entered into the synagogue, and reasoned with the Jews.
Act 18:20 When they asked him to stay with them a longer time, he declined;
Act 18:21 but taking his leave of them, and saying, "I must by all means keep this coming feast in Jerusalem, but I will return again to you if God wills," he set sail from Ephesus.
Act 18:22 When he had landed at Caesarea, he went up and greeted the assembly, and went down to Antioch.
Act 18:23 Having spent some time there, he departed, and went through the region of Galatia, and Phrygia, in order, establishing all the disciples.
Act 18:24 Now a certain Jew named Apollos, an Alexandrian by race, an eloquent man, came to Ephesus. He was mighty in the Scriptures.
Act 18:25 This man had been instructed in the way of the Lord; and being fervent in spirit, he spoke and taught accurately the things concerning Jesus, although he knew only the baptism of John.
Act 18:26 He began to speak boldly in the synagogue. But when Priscilla and Aquila heard him, they took him aside, and explained to him the way of God more accurately.
Act 18:27 When he had determined to pass over into Achaia, the brothers encouraged him, and wrote to the disciples to receive him. When he had come, he greatly helped those who had believed through grace;
Act 18:28 for he powerfully refuted the Jews, publicly showing by the Scriptures that Jesus was the Christ.

"THE SECOND EPISTLE TO THE CORINTHIANS" Chapter Eleven by Mark Copeland