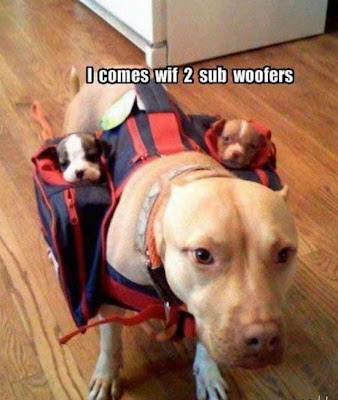 Cute, very CUTE!  I must admit I chuckled when I saw this. Woof, Woof!!!  Talk about a different sense of humor.  BUT, family is family.  You do, in reality, carry them (sometimes even literally) with you everywhere you go.  You love them, care for them and stand by them no matter what. Which leads me to these passages from the book of Ruth.
Ruth 1:1-13 (WEB)
1) It happened in the days when the judges judged, that there was a famine in the land. A certain man of Bethlehem Judah went to live in the country of Moab, he, and his wife, and his two sons.
2) The name of the man was Elimelech, and the name of his wife Naomi, and the name of his two sons Mahlon and Chilion, Ephrathites of Bethlehem Judah. They came into the country of Moab, and continued there.
3) Elimelech, Naomi’s husband, died; and she was left, and her two sons.
4) They took them wives of the women of Moab; the name of the one was Orpah, and the name of the other Ruth: and they lived there about ten years.
5) Mahlon and Chilion both died, and the woman was bereaved of her two children and of her husband.
6) Then she arose with her daughters-in-law, that she might return from the country of Moab: for she had heard in the country of Moab how that Yahweh had visited his people in giving them bread.
7) She went forth out of the place where she was, and her two daughters-in-law with her; and they went on the way to return to the land of Judah.
8) Naomi said to her two daughters-in-law, “Go, return each of you to her mother’s house: Yahweh deal kindly with you, as you have dealt with the dead, and with me.
9) Yahweh grant you that you may find rest, each of you in the house of her husband.” Then she kissed them, and they lifted up their voice, and wept.
10) They said to her, “No, but we will return with you to your people.”
11) Naomi said, “Go back, my daughters. Why do you want to go with me? Do I still have sons in my womb, that they may be your husbands?
12) Go back, my daughters, go your way; for I am too old to have a husband. If I should say, ‘I have hope,’ if I should even have a husband tonight, and should also bear sons;
13) would you then wait until they were grown? Would you then refrain from having husbands? No, my daughters, for it grieves me much for your sakes, for the hand of Yahweh has gone out against me.”
Ruth 4:13-17 (WEB)
13) So Boaz took Ruth, and she became his wife; and he went in to her, and Yahweh gave her conception, and she bore a son.
14) The women said to Naomi, “Blessed be Yahweh, who has not left you this day without a near kinsman; and let his name be famous in Israel.
15) He shall be to you a restorer of life, and sustain you in your old age, for your daughter-in-law, who loves you, who is better to you than seven sons, has borne him.”
16) Naomi took the child, and laid it in her bosom, and became nurse to it.
17) The women, her neighbors, gave him a name, saying, “There is a son born to Naomi;” and they named him Obed. He is the father of Jesse, the father of David.
What is family?  Is it just those you share your gene pool?  Or is it something more?  Ruth could have left Naomi and returned to her physical family, but did not.  She loved her mother-in-law and eventually God blessed us all through her son Obed.  Family is a matter of the heart, and whether your life with them is easy or hard, if love is there, hard times or difficult situations really do not matter.  This applies to our spiritual family as well.  God loves us and cares for us...no matter what.  Its up to us to remember that always and return that love.  Humm, I never thought of myself as a sub-woofer before....
Email ThisBlogThis!Share to TwitterShare to FacebookShare to Pinterest


Php 4:1 Therefore, my brothers, beloved and longed for, my joy and crown, so stand firm in the Lord, my beloved.
Php 4:2 I exhort Euodia, and I exhort Syntyche, to think the same way in the Lord.
Php 4:3 Yes, I beg you also, true yokefellow, help these women, for they labored with me in the Good News, with Clement also, and the rest of my fellow workers, whose names are in the book of life.
Php 4:4 Rejoice in the Lord always! Again I will say, Rejoice!
Php 4:5 Let your gentleness be known to all men. The Lord is at hand.
Php 4:6 In nothing be anxious, but in everything, by prayer and petition with thanksgiving, let your requests be made known to God.
Php 4:7 And the peace of God, which surpasses all understanding, will guard your hearts and your thoughts in Christ Jesus.
Php 4:8 Finally, brothers, whatever things are true, whatever things are honorable, whatever things are just, whatever things are pure, whatever things are lovely, whatever things are of good report; if there is any virtue, and if there is any praise, think about these things.
Php 4:9 The things which you learned, received, heard, and saw in me: do these things, and the God of peace will be with you.
Php 4:10 But I rejoice in the Lord greatly, that now at length you have revived your thought for me; in which you did indeed take thought, but you lacked opportunity.
Php 4:11 Not that I speak in respect to lack, for I have learned in whatever state I am, to be content in it.
Php 4:12 I know how to be humbled, and I know also how to abound. In everything and in all things I have learned the secret both to be filled and to be hungry, both to abound and to be in need.
Php 4:13 I can do all things through Christ, who strengthens me.
Php 4:14 However you did well that you shared in my affliction.
Php 4:15 You yourselves also know, you Philippians, that in the beginning of the Good News, when I departed from Macedonia, no assembly shared with me in the matter of giving and receiving but you only.
Php 4:16 For even in Thessalonica you sent once and again to my need.
Php 4:17 Not that I seek for the gift, but I seek for the fruit that increases to your account.
Php 4:18 But I have all things, and abound. I am filled, having received from Epaphroditus the things that came from you, a sweet-smelling fragrance, an acceptable and well-pleasing sacrifice to God.
Php 4:19 My God will supply every need of yours according to his riches in glory in Christ Jesus.
Php 4:20 Now to our God and Father be the glory forever and ever! Amen.
Php 4:21 Greet every saint in Christ Jesus. The brothers who are with me greet you.
Php 4:22 All the saints greet you, especially those who are of Caesar's household.
Php 4:23 The grace of the Lord Jesus Christ be with you all. Amen.