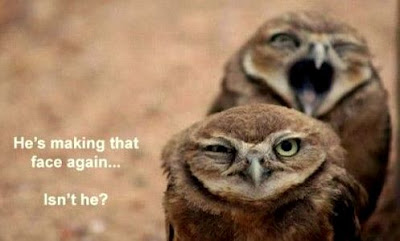 How does the bird in the foreground know? I feel safe in saying he doesn't have eyes in the back of his head and he probably isn't psychic. The answer is experience. For those of you who may watch N.C.I.S., this sort of question is a familiar one and the teams' experiences with one another have taught them to anticipate even when they have no way of really "knowing" something. This is especially true of "Gibbs'" appearance at the most unlikely times and his trademark head slap. What do those who try to follow God really know? Here is a passage from the epistle (book) of 1st John to think about.
1 John 2:5-29 (WEB)
5) But whoever keeps his word, God’s love has most certainly been perfected in him. This is how we know that we are in him:
6) he who says he remains in him ought himself also to walk just like he walked.
7) Brothers, I write no new commandment to you, but an old commandment which you had from the beginning. The old commandment is the word which you heard from the beginning.
8) Again, I write a new commandment to you, which is true in him and in you; because the darkness is passing away, and the true light already shines.
9) He who says he is in the light and hates his brother, is in the darkness even until now.
10) He who loves his brother remains in the light, and there is no occasion for stumbling in him.
11) But he who hates his brother is in the darkness, and walks in the darkness, and doesn’t know where he is going, because the darkness has blinded his eyes.
12) I write to you, little children, because your sins are forgiven you for his name’s sake.
13) I write to you, fathers, because you know him who is from the beginning. I write to you, young men, because you have overcome the evil one. I write to you, little children, because you know the Father.
14) I have written to you, fathers, because you know him who is from the beginning. I have written to you, young men, because you are strong, and the word of God remains in you, and you have overcome the evil one.
15) Don’t love the world, neither the things that are in the world. If anyone loves the world, the Father’s love isn’t in him.
16) For all that is in the world, the lust of the flesh, the lust of the eyes, and the pride of life, isn’t the Father’s, but is the world’s.
17) The world is passing away with its lusts, but he who does God’s will remains forever.
18) Little children, these are the end times, and as you heard that the Antichrist is coming, even now many antichrists have arisen. By this we know that it is the final hour.
19) They went out from us, but they didn’t belong to us; for if they had belonged to us, they would have continued with us. But they left, that they might be revealed that none of them belong to us.
20) You have an anointing from the Holy One, and you all have knowledge.
21) I have not written to you because you don’t know the truth, but because you know it, and because no lie is of the truth.
22) Who is the liar but he who denies that Jesus is the Christ? This is the Antichrist, he who denies the Father and the Son.
23) Whoever denies the Son, the same doesn’t have the Father. He who confesses the Son has the Father also.
24) Therefore, as for you, let that remain in you which you heard from the beginning. If that which you heard from the beginning remains in you, you also will remain in the Son, and in the Father.
25) This is the promise which he promised us, the eternal life.
26) These things I have written to you concerning those who would lead you astray.
27) As for you, the anointing which you received from him remains in you, and you don’t need for anyone to teach you. But as his anointing teaches you concerning all things, and is true, and is no lie, and even as it taught you, you will remain in him.
28) Now, little children, remain in him, that when he appears, we may have boldness, and not be ashamed before him at his coming.
29) If you know that he is righteous, you know that everyone who practices righteousness is born of him.
(1 John 2:5-29, WEB)

The Greeks of ancient times perceived knowledge as something either intuitively understood by intelligence or something realized through experience. I like to think that knowing God is a combination of the two. We innately understand the difference between right and wrong, good and bad and the logical expansion of these concepts will led one to the creator of the universe. To see God's word validated day by day in the world around us also helps us to "know" what we understand through our intellectual reasoning is true. Understanding God is not "for the birds", it is relevant to living and essential to living life to its fullest. Humm, is something going on in my living room; I better check...... Hello?
Email ThisBlogThis!Share to TwitterShare to FacebookShare to Pinterest

Lurking, just around the corner 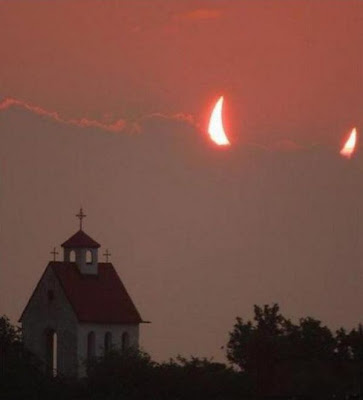 I found this picture to be very interesting. Not only is the sun eclipsed (by the moon?) but it looks like Satan is hiding behind the clouds waiting to get at the church. Satan does some of his best work in churches and although I really hate the concept, its true. Satan is one very patient, clever, crafty adversary. Think for a minute how he tried to trick Jesus. Luke gives an interesting account of the episode.
Luke 4:1-13 (WEB)

Luke 4
1) Jesus, full of the Holy Spirit, returned from the Jordan, and was led by the Spirit into the wilderness
2) for forty days, being tempted by the devil. He ate nothing in those days. Afterward, when they were completed, he was hungry.
3) The devil said to him, “If you are the Son of God, command this stone to become bread.”
4) Jesus answered him, saying, “It is written, ‘Man shall not live by bread alone, but by every word of God.’”
5) The devil, leading him up on a high mountain, showed him all the kingdoms of the world in a moment of time.
6) The devil said to him, “I will give you all this authority, and their glory, for it has been delivered to me; and I give it to whomever I want.
7) If you therefore will worship before me, it will all be yours.”
8) Jesus answered him, “Get behind me Satan! For it is written, ‘You shall worship the Lord your God, and you shall serve him only.’”
9) He led him to Jerusalem, and set him on the pinnacle of the temple, and said to him, “If you are the Son of God, cast yourself down from here,
10) for it is written, ‘He will put his angels in charge of you, to guard you;’
11) and, ‘On their hands they will bear you up, lest perhaps you dash your foot against a stone.’”
12) Jesus answering, said to him, “It has been said, ‘You shall not tempt the Lord your God.’”
13) When the devil had completed every temptation, he departed from him until another time.
(Luke 4:1-13, WEB)

If you read the account by Matthew, you will notice the emboldened verse (13) is not there. Interesting. Luke's account does show a prominent aspect of Satan: He is patient. He waited for another time to tempt Jesus. Humm, if Satan worked so hard on Jesus and Jesus was obviously unassailable, then what does that say about us weaker spiritual beings. Exactly what the picture shows; Satan is waiting for an opening for us as well. Watch out, think spiritually and be prepared; you never know.....
Email ThisBlogThis!Share to TwitterShare to FacebookShare to Pinterest
Newer Posts Older Posts Home
Subscribe to: Posts (Atom)