A long way up 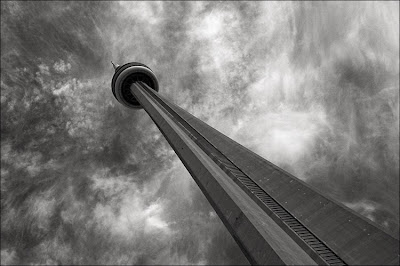 Its the CNN tower and its BIG! More than that, this picture makes me realize how far it is to the top! Being a Christian seems like climbing this tower to me. You start at the ground floor at your conversion and over time learn to forget your "old" life. Problems happen, its like that for everyone and they just have to be put behind you. Over the span of life you may feel you have accomplished a little or a lot, but its not what you have done to get to heaven, its the RELATIONSHIP WITH JESUS that is important. Reality sets in a no matter how "good" you are, in and of yourself, YOU don't measure up. God makes up the difference through Jesus and you just need to keep looking up and persevere. I love this passage from the book of Philippians because it seems to transform the mundane into a life of poetry for me.
Phil 3:1-14 Finally, my brothers, rejoice in the Lord. To write the same things to you, to me indeed is not tiresome, but for you it is safe.
2 Beware of the dogs, beware of the evil workers, beware of the false circumcision.
3 For we are the circumcision, who worship God in the Spirit, and rejoice in Christ Jesus, and have no confidence in the flesh;
4 though I myself might have confidence even in the flesh. If any other man thinks that he has confidence in the flesh, I yet more:
5 circumcised the eighth day, of the stock of Israel, of the tribe of Benjamin, a Hebrew of Hebrews; concerning the law, a Pharisee;
6 concerning zeal, persecuting the assembly; concerning the righteousness which is in the law, found blameless.
7 However, what things were gain to me, these have I counted loss for Christ.
8 Yes most assuredly, and I count all things to be loss for the excellency of the knowledge of Christ Jesus, my Lord, for whom I suffered the loss of all things, and count them nothing but refuse, that I may gain Christ
9 and be found in him, not having a righteousness of my own, that which is of the law, but that which is through faith in Christ, the righteousness which is from God by faith;
10 that I may know him, and the power of his resurrection, and the fellowship of his sufferings, becoming conformed to his death;
11 if by any means I may attain to the resurrection from the dead.
12 Not that I have already obtained, or am already made perfect; but I press on, if it is so that I may take hold of that for which also I was taken hold of by Christ Jesus.
13 Brothers, I don't regard myself as yet having taken hold, but one thing I do. Forgetting the things which are behind, and stretching forward to the things which are before,
14 I press on toward the goal for the prize of the high calling of God in Christ Jesus. WEB
Many years ago I worked as a guard for a company in upstate New York. After about 8 PM or so, there were very few people left in the plant and after 10 PM I was all alone. But strangely, I never felt alone, even when there was tons of ice and snow outside and I knew that if I fell punching that key clock on one of the outside buildings it could be disastrous; still I kept doing my rounds. I really don't remember being afraid at all; I just kept on doing my thing. God was with me and that's all that mattered. Even when the company was broken into (on my day off) I still continued working as before. Living with Jesus is like that; you just keep going and God takes care of the rest. It may be a long way up to heaven, but the company is great!
Email ThisBlogThis!Share to TwitterShare to FacebookShare to Pinterest 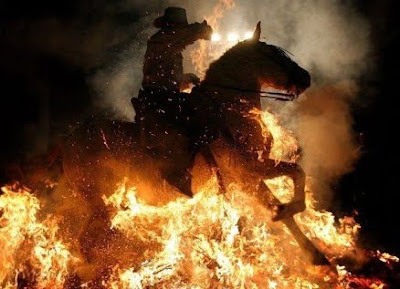 Whoever is doing this is just a little "crazy"! Why would someone do this in the first place? For money, a bet or some other "reason". The only one I can think of is that he is running for his life. But, people do the strangest things for equally strange reasons. When the topic of religion is brought up, well, strange becomes normal and normal is out there. Why would someone base their hope of heaven on a mere mortal or follow some brilliant teacher instead of going to the source, Jesus HIMSELF. The Corinthian Christians were all mixed up and the apostle Paul was trying to solve their problems in his letters, but it wasn't easy. Read this short passage from 1st Corinthians and reflect on it a bit.
1 Cor 3:1-15
3 Brothers, I couldn't speak to you as to spiritual, but as to fleshly, as to babies in Christ.
2 I fed you with milk, not with meat; for you weren't yet ready. Indeed, not even now are you ready,
3 for you are still fleshly. For insofar as there is jealousy, strife, and factions among you, aren't you fleshly, and don't you walk in the ways of men?
4 For when one says, "I follow Paul," and another, "I follow Apollos," aren't you fleshly?
5 Who then is Apollos, and who is Paul, but servants through whom you believed; and each as the Lord gave to him?
6 I planted. Apollos watered. But God gave the increase.
7 So then neither he who plants is anything, nor he who waters, but God who gives the increase.
8 Now he who plants and he who waters are the same, but each will receive his own reward according to his own labor.
9 For we are God's fellow workers. You are God's farming, God's building.
10 According to the grace of God which was given to me, as a wise master builder I laid a foundation, and another builds on it. But let each man be careful how he builds on it.
11 For no one can lay any other foundation than that which has been laid, which is Jesus Christ.
12 But if anyone builds on the foundation with gold, silver, costly stones, wood, hay, or stubble;
13 each man's work will be revealed. For the Day will declare it, because it is revealed in fire; and the fire itself will test what sort of work each man's work is.
14 If any man's work remains which he built on it, he will receive a reward.
15 If any man's work is burned, he will suffer loss, but he himself will be saved, but as through fire. WEB
If God builds the church it stands, otherwise, in the last day it will be destroyed. Men are fallible, God is not. If the church passes the example found in the New Testament, it will retained; if not, destroyed. Having said this, focus for a minute on verse 15. God is merciful and will bring the saved through the fire, but with difficulty. Its worth asking yourself the question: "What am I basing my religious beliefs and practices on?" Hopefully, you will think about it and then go the the Bible to check the foundation; make it fireproof!
Email ThisBlogThis!Share to TwitterShare to FacebookShare to Pinterest
Newer Posts Older Posts Home
Subscribe to: Posts (Atom)