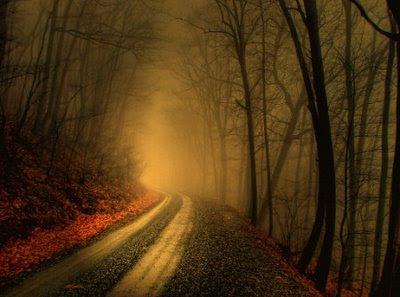 This picture reminds me of upstate New York in autumn, when the fog can get soooo thick you MUST slow way down just so you don't get into an accident. Why? Because you do not know what's up ahead, that's why! But what if you knew and what if you knew it very, very bad for you.... would you still go? Jesus was faced with this problem and his response was....
Luk 22:14 When the hour had come, he sat down with the twelve apostles.
Luk 22:15 He said to them, "I have earnestly desired to eat this Passover with you before I suffer,
Luk 22:16 for I tell you, I will no longer by any means eat of it until it is fulfilled in the Kingdom of God."
Luk 22:17 He received a cup, and when he had given thanks, he said, "Take this, and share it among yourselves,
Luk 22:18 for I tell you, I will not drink at all again from the fruit of the vine, until the Kingdom of God comes."
Luk 22:19 He took bread, and when he had given thanks, he broke it, and gave to them, saying, "This is my body which is given for you. Do this in memory of me."
Luk 22:20 Likewise, he took the cup after supper, saying, "This cup is the new covenant in my blood, which is poured out for you.
World English Bible
Jesus knew what was in store for him and went forward anyway, giving himself for me. Sobering thought! My road up ahead is unknown, but I what I do know is that I have a promise
from Jesus (a covenant, really) that I will be with him again. Does it really matter what the future holds...? The answer is no, as long as I have the hope of seeing Jesus at the end of it.