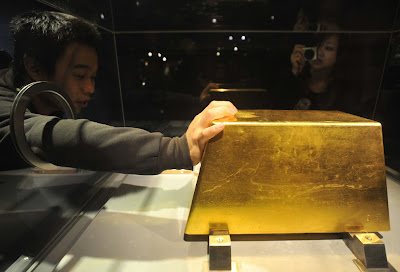 This is the largest block of gold in the world. Worth an estimated 8.7 million dollars, it is on display in Taiwan. I have a hard time thinking in terms of millions of dollars, but it doesn't take a genius to know that amount is a lot of money. I wonder what I would do with it? Perhaps, I would buy a fancy car, like the Excalibur I have always wanted (kits start at about $80,000), or maybe a 20 room mansion or a 5 carat yellow diamond. A few dozen expensive suits would be nice! But why think small; why not buy a tropical island and a 60 foot yacht as well. Perhaps I would go into politics and buy a senate seat or a cabinet post; maybe even bribe my way into the white house. Of course, I couldn't stop there, I would have to aspire to be America's first dictator. (as opposed to a president, who doesn't have much power??) Humm, there seems to be a pattern here and it made me think of this passage from Paul's letter to Timothy.

1 Timothy 6:1-11 WEB (R)
(1) Let as many as are bondservants under the yoke count their own masters worthy of all honor, that the name of God and the doctrine not be blasphemed.
(2) Those who have believing masters, let them not despise them, because they are brothers, but rather let them serve them, because those who partake of the benefit are believing and beloved. Teach and exhort these things.
(3) If anyone teaches a different doctrine, and doesn't consent to sound words, the words of our Lord Jesus Christ, and to the doctrine which is according to godliness,
(4) he is conceited, knowing nothing, but obsessed with arguments, disputes, and word battles, from which come envy, strife, reviling, evil suspicions,
(5) constant friction of people of corrupt minds and destitute of the truth, who suppose that godliness is a means of gain. Withdraw yourself from such.
(6) But godliness with contentment is great gain.
(7) For we brought nothing into the world, and we certainly can't carry anything out.
(8) But having food and clothing, we will be content with that.
(9) But those who are determined to be rich fall into a temptation and a snare and many foolish and harmful lusts, such as drown men in ruin and destruction.
(10) For the love of money is a root of all kinds of evil. Some have been led astray from the faith in their greed, and have pierced themselves through with many sorrows.
(11) But you, man of God, flee these things, and follow after righteousness, godliness, faith, love, patience, and gentleness.

Bottom line is that focusing on things leads to focusing on SELF and you just get more and more and more greedy. The pattern to follow is found in verses 6 to 8 and 11, but I have only known a very few people in my entire life who lived up to that standard. Unlike most posts, this one is directed at myself because I am thinking of buying a new camera which I can't really afford. Even though I may want it right now, I will wait until I have the money in my hand or God just mails me one; whichever comes first. Until then, I guess I will just have to stay away from "Abe's of Maine"; their prices are just too tempting.