The ugly and the beautiful 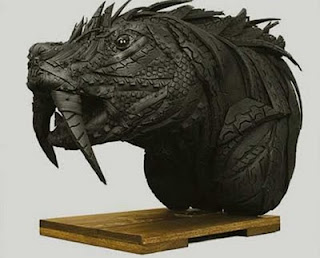 Ugly, isn't it?  Yet, it is beautiful at the same time!  So much of life is like that, full of contradictions and irony!  This picture doesn't stop there, for the sculpture is made from used tires.  This makes it even more interesting because something fresh and very creative is made from material that was discarded and worth practically nothing.  I wonder how God looks at those of us whose lives are corrupted by sin... are they nothing?  What can be done?  Consider Ezekiel chapter 18 for a few minutes and see...
WEB: Ezekiel Chapter 18

[20] The soul who sins, he shall die: the son shall not bear the iniquity of the father, neither shall the father bear the iniquity of the son; the righteousness of the righteous shall be on him, and the wickedness of the wicked shall be on him. [21] But if the wicked turn from all his sins that he has committed, and keep all my statutes, and do that which is lawful and right, he shall surely live, he shall not die. [22] None of his transgressions that he has committed shall be remembered against him: in his righteousness that he has done he shall live. [23] Have I any pleasure in the death of the wicked? says the Lord Yahweh; and not rather that he should return from his way, and live? [24] But when the righteous turns away from his righteousness, and commits iniquity, and does according to all the abominations that the wicked man does, shall he live? None of his righteous deeds that he has done shall be remembered: in his trespass that he has trespassed, and in his sin that he has sinned, in them shall he die. [25] Yet you say, The way of the Lord is not equal. Hear now, house of Israel: Is my way not equal? Aren’t your ways unequal? [26] When the righteous man turns away from his righteousness, and commits iniquity, and dies therein; in his iniquity that he has done shall he die. [27] Again, when the wicked man turns away from his wickedness that he has committed, and does that which is lawful and right, he shall save his soul alive. [28] Because he considers, and turns away from all his transgressions that he has committed, he shall surely live, he shall not die. [29] Yet the house of Israel says, “The way of the Lord is not fair.” House of Israel, aren’t my ways fair? Aren’t your ways unfair? [30] Therefore I will judge you, house of Israel, everyone according to his ways, says the Lord Yahweh. Return, and turn yourselves from all your transgressions; so iniquity shall not be your ruin. [31] Cast away from you all your transgressions, in which you have transgressed; and make yourself a new heart and a new spirit: for why will you die, house of Israel? [32] For I have no pleasure in the death of him who dies, says the Lord Yahweh: therefore turn yourselves, and live.
Sin is death. Sin is a turning away from God; it is a CHOICE!!!  Not a disease as modern society would tell us; not an environmental conditioning, it is a CHOICE!!!  If we turn to God and CHANGE, God will forgive; but we must CHANGE!!!  God will help us turn the refuse of our lives into something beautiful, just like the artist did with the old tires that make up this sculpture but WE have to change our heart and leave the rest to God.  Don't waste one more minute doing things your own way; listen and change!!!  Who knows what God will sculpt from your life?
Email ThisBlogThis!Share to TwitterShare to FacebookShare to Pinterest


Gen 4:1 The man knew Eve his wife. She conceived, and gave birth to Cain, and said, "I have gotten a man with Yahweh's help."
Gen 4:2 Again she gave birth, to Cain's brother Abel. Abel was a keeper of sheep, but Cain was a tiller of the ground.
Gen 4:3 As time passed, it happened that Cain brought an offering to Yahweh from the fruit of the ground.
Gen 4:4 Abel also brought some of the firstborn of his flock and of its fat. Yahweh respected Abel and his offering,
Gen 4:5 but he didn't respect Cain and his offering. Cain was very angry, and the expression on his face fell.
Gen 4:6 Yahweh said to Cain, "Why are you angry? Why has the expression of your face fallen?
Gen 4:7 If you do well, will it not be lifted up? If you don't do well, sin crouches at the door. Its desire is for you, but you are to rule over it."
Gen 4:8 Cain said to Abel, his brother, "Let's go into the field." It happened when they were in the field, that Cain rose up against Abel, his brother, and killed him.
Gen 4:9 Yahweh said to Cain, "Where is Abel, your brother?" He said, "I don't know. Am I my brother's keeper?"
Gen 4:10 Yahweh said, "What have you done? The voice of your brother's blood cries to me from the ground.
Gen 4:11 Now you are cursed because of the ground, which has opened its mouth to receive your brother's blood from your hand.
Gen 4:12 From now on, when you till the ground, it won't yield its strength to you. You shall be a fugitive and a wanderer in the earth."
Gen 4:13 Cain said to Yahweh, "My punishment is greater than I can bear.
Gen 4:14 Behold, you have driven me out this day from the surface of the ground. I will be hidden from your face, and I will be a fugitive and a wanderer in the earth. It will happen that whoever finds me will kill me."
Gen 4:15 Yahweh said to him, "Therefore whoever slays Cain, vengeance will be taken on him sevenfold." Yahweh appointed a sign for Cain, lest any finding him should strike him.
Gen 4:16 Cain went out from Yahweh's presence, and lived in the land of Nod, east of Eden.
Gen 4:17 Cain knew his wife. She conceived, and gave birth to Enoch. He built a city, and called the name of the city, after the name of his son, Enoch.
Gen 4:18 To Enoch was born Irad. Irad became the father of Mehujael. Mehujael became the father of Methushael. Methushael became the father of Lamech.
Gen 4:19 Lamech took two wives: the name of the one was Adah, and the name of the other Zillah.
Gen 4:20 Adah gave birth to Jabal, who was the father of those who dwell in tents and have livestock.
Gen 4:21 His brother's name was Jubal, who was the father of all who handle the harp and pipe.
Gen 4:22 Zillah also gave birth to Tubal Cain, the forger of every cutting instrument of brass and iron. Tubal Cain's sister was Naamah.
Gen 4:23 Lamech said to his wives, "Adah and Zillah, hear my voice. You wives of Lamech, listen to my speech, for I have slain a man for wounding me, a young man for bruising me.
Gen 4:24 If Cain will be avenged seven times, truly Lamech seventy-seven times."
Gen 4:25 Adam knew his wife again. She gave birth to a son, and named him Seth, "for God has appointed me another child instead of Abel, for Cain killed him."
Gen 4:26 There was also born a son to Seth, and he named him Enosh. Then men began to call on Yahweh's name.
Email ThisBlogThis!Share to TwitterShare to FacebookShare to Pinterest


Mat 3:1 In those days, John the Baptizer came, preaching in the wilderness of Judea, saying,
Mat 3:2 "Repent, for the Kingdom of Heaven is at hand!"
Mat 3:3 For this is he who was spoken of by Isaiah the prophet, saying, "The voice of one crying in the wilderness, make ready the way of the Lord. Make his paths straight."
Mat 3:4 Now John himself wore clothing made of camel's hair, with a leather belt around his waist. His food was locusts and wild honey.
Mat 3:5 Then people from Jerusalem, all of Judea, and all the region around the Jordan went out to him.
Mat 3:6 They were baptized by him in the Jordan, confessing their sins.
Mat 3:7 But when he saw many of the Pharisees and Sadducees coming for his baptism, he said to them, "You offspring of vipers, who warned you to flee from the wrath to come?
Mat 3:8 Therefore bring forth fruit worthy of repentance!
Mat 3:9 Don't think to yourselves, 'We have Abraham for our father,' for I tell you that God is able to raise up children to Abraham from these stones.
Mat 3:10 "Even now the axe lies at the root of the trees. Therefore, every tree that doesn't bring forth good fruit is cut down, and cast into the fire.
Mat 3:11 I indeed baptize you in water for repentance, but he who comes after me is mightier than I, whose shoes I am not worthy to carry. He will baptize you in the Holy Spirit.
Mat 3:12 His winnowing fork is in his hand, and he will thoroughly cleanse his threshing floor. He will gather his wheat into the barn, but the chaff he will burn up with unquenchable fire."
Mat 3:13 Then Jesus came from Galilee to the Jordan to John, to be baptized by him.
Mat 3:14 But John would have hindered him, saying, "I need to be baptized by you, and you come to me?"
Mat 3:15 But Jesus, answering, said to him, "Allow it now, for this is the fitting way for us to fulfill all righteousness." Then he allowed him.
Mat 3:16 Jesus, when he was baptized, went up directly from the water: and behold, the heavens were opened to him. He saw the Spirit of God descending as a dove, and coming on him.
Mat 3:17 Behold, a voice out of the heavens said, "This is my beloved Son, with whom I am well pleased."

Walking in the fear of the LORD by Mark Copeland

http://executableoutlines.com/text/ac9_31.htm
This is one topic that all should read... Gary
Email ThisBlogThis!Share to TwitterShare to FacebookShare to Pinterest
Newer Posts Older Posts Home
Subscribe to: Posts (Atom)