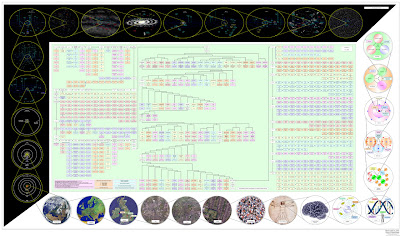 This is a very interesting chart; interesting, but a little confusing.  I would be a liar if I said I understood it all.  For me, one concept leaps out; man is a small insignificant portion of the universe. Yet, God cares for me...
Hebrews 2:1-18 (WEB)
1) Therefore we ought to pay greater attention to the things that were heard, lest perhaps we drift away.
2) For if the word spoken through angels proved steadfast, and every transgression and disobedience received a just recompense;
3) how will we escape if we neglect so great a salvation—which at the first having been spoken through the Lord, was confirmed to us by those who heard;
4) God also testifying with them, both by signs and wonders, by various works of power, and by gifts of the Holy Spirit, according to his own will?
5) For he didn’t subject the world to come, of which we speak, to angels.
6) But one has somewhere testified, saying, “What is man, that you think of him? Or the son of man, that you care for him?
7) You made him a little lower than the angels. You crowned him with glory and honor.
8) You have put all things in subjection under his feet.” For in that he subjected all things to him, he left nothing that is not subject to him. But now we don’t see all things subjected to him, yet.
9) But we see him who has been made a little lower than the angels, Jesus, because of the suffering of death crowned with glory and honor, that by the grace of God he should taste of death for everyone.
10) For it became him, for whom are all things, and through whom are all things, in bringing many children to glory, to make the author of their salvation perfect through sufferings.
11) For both he who sanctifies and those who are sanctified are all from one, for which cause he is not ashamed to call them brothers,
12) saying, “I will declare your name to my brothers. In the midst of the congregation I will sing your praise.”
13) Again, “I will put my trust in him.” Again, “Behold, here I am with the children whom God has given me.”
14) Since then the children have shared in flesh and blood, he also himself in the same way partook of the same, that through death he might bring to nothing him who had the power of death, that is, the devil,
15) and might deliver all of them who through fear of death were all their lifetime subject to bondage.
16) For most certainly, he doesn’t give help to angels, but he gives help to the seed of Abraham.
17) Therefore he was obligated in all things to be made like his brothers, that he might become a merciful and faithful high priest in things pertaining to God, to make atonement for the sins of the people.
18) For in that he himself has suffered being tempted, he is able to help those who are tempted.

Psalms 144:1-6 (WEB)
1) By David. Blessed be Yahweh, my rock, who teaches my hands to war, and my fingers to battle:
2) my loving kindness, my fortress, my high tower, my deliverer, my shield, and he in whom I take refuge; who subdues my people under me.
3) Yahweh, what is man, that you care for him? Or the son of man, that you think of him?
4) Man is like a breath. His days are like a shadow that passes away.
5) Part your heavens, Yahweh, and come down. Touch the mountains, and they will smoke.
6) Throw out lightning, and scatter them. Send out your arrows, and rout them.

I included the Hebrews passage and that from the Psalms for a good reason.  David was a man after God's own heart and God cared for him and so was Jesus.  It was a heart problem that started all the trouble in the first place and one who has a true Godly heart that solved the problem.  I love the Hebrews passage because it answers a question that was probably asked (but not recorded in Genesis to my knowledge); namely... God, why would you give us rules (The Garden of Eden type) when you knew we couldn't keep them?  Jesus shows that they could be kept with a pure heart, but more than that.  He understands we all can't do it and adopted us into the family of God and more than that paid the price for our waywardness.  Talk about one great deal.  The creator of the whole universe cares so much for little ole me that he was willing to suffer and die for somebody like myself.  Puts things into perspective doesn't it.  Look at the chart again... and marvel!!!!!

PS.  you might want to copy the chart to your computer and look at it in a larger size; I think it will really amaze you then!!!!!!!
Email ThisBlogThis!Share to TwitterShare to FacebookShare to Pinterest
Newer Posts Older Posts Home
Subscribe to: Posts (Atom)