Names, labels and the outworking of the heart 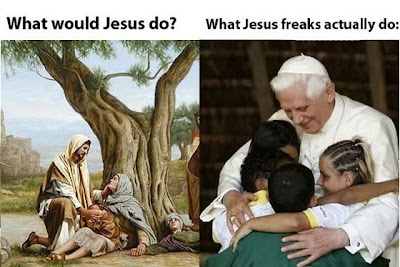 When I saw this picture on the net the other day, it caught my attention. There were a series of them, all with the "ideal" on the left and the "distortion" on the right. This one didn't quite achieve its intended purpose, though, so it seemed worth mentioning on the blog. I must confess, I hate the right title. Lets rename the right title to something more palatable, say: What would those who try to follow Jesus do? OK, so I am not a Roman Catholic, but that does not mean that many, many of its adherents genuinely TRY to do the right thing. Love and compassion go hand in hand and the logical outcome is action. Consider the following passage from the book of Luke to see what I mean.
Luke 10:25-37 (WEB)
25) Behold, a certain lawyer stood up and tested him, saying, “Teacher, what shall I do to inherit eternal life?”
26) He said to him, “What is written in the law? How do you read it?”
27) He answered, “You shall love the Lord your God with all your heart, with all your soul, with all your strength, and with all your mind; and your neighbor as yourself.”
28) He said to him, “You have answered correctly. Do this, and you will live.”
29) But he, desiring to justify himself, asked Jesus, “Who is my neighbor?”
30) Jesus answered, “A certain man was going down from Jerusalem to Jericho, and he fell among robbers, who both stripped him and beat him, and departed, leaving him half dead.
31) By chance a certain priest was going down that way. When he saw him, he passed by on the other side.
32) In the same way a Levite also, when he came to the place, and saw him, passed by on the other side.
33) But a certain Samaritan, as he traveled, came where he was. When he saw him, he was moved with compassion,
34) came to him, and bound up his wounds, pouring on oil and wine. He set him on his own animal, and brought him to an inn, and took care of him.
35) On the next day, when he departed, he took out two denarii, and gave them to the host, and said to him, ‘Take care of him. Whatever you spend beyond that, I will repay you when I return.’
36) Now which of these three do you think seemed to be a neighbor to him who fell among the robbers?”
37) He said, “He who showed mercy on him.” Then Jesus said to him, “Go and do likewise.”
(Luke 10:25-37, WEB)

There is an old saying: Love God and do what you like. The idea is that if you truly love God, you will WANT to please him in everything you do, so rules and regulations are not necessary. Religion that is worth something, does something. The loving in the heart yields a doing in the life. Don't worry about people putting labels on you, just continue to try to do what is right and your heart will ultimately find a way to express itself. Might also be a good idea to read the Bible as much as you can, too!!! On second thought, maybe being called a "Jesus freak" might not be such a bad idea after all, because if loving others gets that label, then I am all for it.
Email ThisBlogThis!Share to TwitterShare to FacebookShare to Pinterest
Newer Posts Older Posts Home
Subscribe to: Posts (Atom)