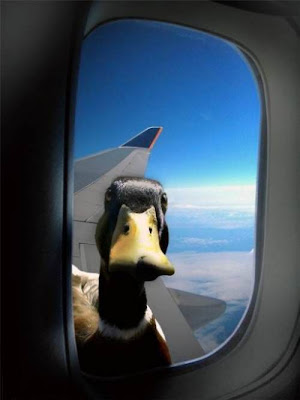 If it looks like a duck, walks like a duck and quacks like a duck...it must be a duck, right? Maybe and maybe not. Personally, I thinks this photo was manipulated. But, if not, what a picture! You just never would expect to see a duck on the wing of an airplane. This picture reminded me of a passage in the New Testament that I have used before, but this time for a different reason.


Acts 12:5-16 WEB (R)
(5) Peter therefore was kept in the prison, but constant prayer was made by the assembly to God for him.
(6) The same night when Herod was about to bring him out, Peter was sleeping between two soldiers, bound with two chains. Guards in front of the door kept the prison.
(7) And behold, an angel of the Lord stood by him, and a light shone in the cell. He struck Peter on the side, and woke him up, saying, "Stand up quickly!" His chains fell off from his hands.
(8) The angel said to him, "Get dressed and put on your sandals." He did so. He said to him, "Put on your cloak, and follow me."
(9) And he went out and followed him. He didn't know that what was being done by the angel was real, but thought he saw a vision.
(10) When they were past the first and the second guard, they came to the iron gate that leads into the city, which opened to them by itself. They went out, and went down one street, and immediately the angel departed from him.
(11) When Peter had come to himself, he said, "Now I truly know that the Lord has sent out his angel and delivered me out of the hand of Herod, and from everything the Jewish people were expecting."
(12) Thinking about that, he came to the house of Mary, the mother of John whose surname was Mark, where many were gathered together and were praying.
(13) When Peter knocked at the door of the gate, a maid named Rhoda came to answer.
(14) When she recognized Peter's voice, she didn't open the gate for joy, but ran in, and reported that Peter was standing in front of the gate.
(15) They said to her, "You are crazy!" But she insisted that it was so. They said, "It is his angel."
(16) But Peter continued knocking. When they had opened, they saw him, and were amazed.


Rhoda and the unidentified "they" couldn't believe their eyes (and ears)! Why, I wonder? They had been praying "constantly" for him and yet they were surprised to actually see him? Most of the time, God answers prayer in rather ordinary ways, but sometimes, just sometimes, we see his workings in ways that border on the miraculous. When this happens, don't be surprised, the duck right in front of you may be real after all!!!
Email ThisBlogThis!Share to TwitterShare to FacebookShare to Pinterest
Newer Posts Older Posts Home
Subscribe to: Posts (Atom)