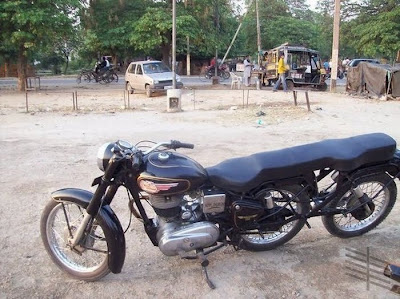 I see a lot of motorcycles in Florida!  Its very common on a sunny day for an older couple to be out for a ride... no big deal!  BUT, this cycle is a little different than anything I have ever seen before.  It seems to me that this one could easily seat three people, perhaps even four!!!  As I think about it, Jesus said where two or three are gathered together, I am in the midst of them.  Humm, a church on a motorcycle???  In one of our classes AT CHURCH, we have been studying what it means to be a church and so I thought of the "one another" passages from the Bible.  Here are a few...
Some negative ones first...
WEB: Romans 14:13. Therefore let’s not judge one another any more, but judge this rather, that no man put a stumbling block in his brother’s way, or an occasion for falling.
WEB: I Corinthians 4:6. Now these things, brothers, I have in a figure transferred to myself and Apollos for your sakes, that in us you might learn not to think beyond the things which are written, that none of you be puffed up against one another.
WEB: Galatians 5:26. Let’s not become conceited, provoking one another, and envying one another.
WEB: Colossians 3:9. Don’t lie to one another, seeing that you have put off the old man with his doings,
WEB: James 4:11. Don’t speak against one another, brothers. He who speaks against a brother and judges his brother, speaks against the law and judges the law. But if you judge the law, you are not a doer of the law, but a judge.
WEB: James 5:9. Don’t grumble, brothers, against one another, so that you won’t be judged. Behold, the judge stands at the door.
Next, on to the positive...
WEB: John 13:34. A new commandment I give to you, that you love one another, just like I have loved you; that you also love one another.
WEB: Romans 12:10. In love of the brothers be tenderly affectionate one to another; in honor preferring one another;
WEB: Romans 14:19. So then, let us follow after things which make for peace, and things by which we may build one another up.
WEB: Romans 15:7. Therefore accept one another, even as Christ also accepted you, to the glory of God.
WEB: Romans 16:16. Greet one another with a holy kiss. The assemblies of Christ greet you.
WEB: I Corinthians 12:25. that there should be no division in the body, but that the members should have the same care for one another.
WEB: Galatians 5:13. For you, brothers, were called for freedom. Only don’t use your freedom for gain to the flesh, but through love be servants to one another.
WEB: Galatians 6:2. Bear one another’s burdens, and so fulfill the law of Christ.
WEB: Ephesians 4:25. Therefore, putting away falsehood, speak truth each one with his neighbor. For we are members of one another.
WEB: Ephesians 4:32. And be kind to one another, tenderhearted, forgiving each other, just as God also in Christ forgave you.
WEB: Colossians 3:13. bearing with one another, and forgiving each other, if any man has a complaint against any; even as Christ forgave you, so you also do.

WEB: Colossians 3:16. Let the word of Christ dwell in you richly; in all wisdom teaching and admonishing one another with psalms, hymns, and spiritual songs, singing with grace in your heart to the Lord.

WEB: I Thessalonians 4:18. Therefore comfort one another with these words.

WEB: I Thessalonians 5:15. See that no one returns evil for evil to anyone, but always follow after that which is good, for one another, and for all.

WEB: Hebrews 10:24. Let us consider how to provoke one another to love and good works,
WEB: James 5:16. Confess your offenses to one another, and pray for one another, that you may be healed. The insistent prayer of a righteous person is powerfully effective.
WEB: I Peter 4:9. Be hospitable to one another without grumbling.
WEB: I John 1:7. But if we walk in the light, as he is in the light, we have fellowship with one another, and the blood of Jesus Christ, his Son, cleanses us from all sin.
And this was only a few of them!!!  OK, there is enough in these verses for one very LONG post, so let me just say this:  Wouldn't it be nice to be in an assembly of people (a church) where they actually PRACTICED THESE THINGS!!!  Wait a minute, its not they, its me!!!  I need to read this again and remember to practice them myself!!!  Well, that is about it, but the only thing that remains to be addressed is a small little problem with the motorcycle....  Where do we store the hymnbooks?
Email ThisBlogThis!Share to TwitterShare to FacebookShare to Pinterest


Exo 23:1 "You shall not spread a false report. Don't join your hand with the wicked to be a malicious witness.
Exo 23:2 You shall not follow a crowd to do evil; neither shall you testify in court to side with a multitude to pervert justice;
Exo 23:3 neither shall you favor a poor man in his cause.
Exo 23:4 "If you meet your enemy's ox or his donkey going astray, you shall surely bring it back to him again.
Exo 23:5 If you see the donkey of him who hates you fallen down under his burden, don't leave him, you shall surely help him with it.
Exo 23:6 "You shall not deny justice to your poor people in their lawsuits.
Exo 23:7 "Keep far from a false charge, and don't kill the innocent and righteous: for I will not justify the wicked.
Exo 23:8 "You shall take no bribe, for a bribe blinds those who have sight and perverts the words of the righteous.
Exo 23:9 "You shall not oppress an alien, for you know the heart of an alien, seeing you were aliens in the land of Egypt.
Exo 23:10 "For six years you shall sow your land, and shall gather in its increase,
Exo 23:11 but the seventh year you shall let it rest and lie fallow, that the poor of your people may eat; and what they leave the animal of the field shall eat. In like manner you shall deal with your vineyard and with your olive grove.
Exo 23:12 "Six days you shall do your work, and on the seventh day you shall rest, that your ox and your donkey may have rest, and the son of your handmaid, and the alien may be refreshed.
Exo 23:13 "Be careful to do all things that I have said to you; and don't invoke the name of other gods, neither let them be heard out of your mouth.
Exo 23:14 "You shall observe a feast to me three times a year.
Exo 23:15 You shall observe the feast of unleavened bread. Seven days you shall eat unleavened bread, as I commanded you, at the time appointed in the month Abib (for in it you came out from Egypt), and no one shall appear before me empty.
Exo 23:16 And the feast of harvest, the first fruits of your labors, which you sow in the field: and the feast of harvest, at the end of the year, when you gather in your labors out of the field.
Exo 23:17 Three times in the year all your males shall appear before the Lord Yahweh.
Exo 23:18 "You shall not offer the blood of my sacrifice with leavened bread, neither shall the fat of my feast remain all night until the morning.
Exo 23:19 The first of the first fruits of your ground you shall bring into the house of Yahweh your God. "You shall not boil a kid in its mother's milk.
Exo 23:20 "Behold, I send an angel before you, to keep you by the way, and to bring you into the place which I have prepared.
Exo 23:21 Pay attention to him, and listen to his voice. Don't provoke him, for he will not pardon your disobedience, for my name is in him.
Exo 23:22 But if you indeed listen to his voice, and do all that I speak, then I will be an enemy to your enemies, and an adversary to your adversaries.
Exo 23:23 For my angel shall go before you, and bring you in to the Amorite, the Hittite, the Perizzite, the Canaanite, the Hivite, and the Jebusite; and I will cut them off.
Exo 23:24 You shall not bow down to their gods, nor serve them, nor follow their practices, but you shall utterly overthrow them and demolish their pillars.
Exo 23:25 You shall serve Yahweh your God, and he will bless your bread and your water, and I will take sickness away from your midst.
Exo 23:26 No one will miscarry or be barren in your land. I will fulfill the number of your days.
Exo 23:27 I will send my terror before you, and will confuse all the people to whom you come, and I will make all your enemies turn their backs to you.
Exo 23:28 I will send the hornet before you, which will drive out the Hivite, the Canaanite, and the Hittite, from before you.
Exo 23:29 I will not drive them out from before you in one year, lest the land become desolate, and the animals of the field multiply against you.
Exo 23:30 Little by little I will drive them out from before you, until you have increased and inherit the land.
Exo 23:31 I will set your border from the Red Sea even to the sea of the Philistines, and from the wilderness to the River; for I will deliver the inhabitants of the land into your hand, and you shall drive them out before you.
Exo 23:32 You shall make no covenant with them, nor with their gods.
Exo 23:33 They shall not dwell in your land, lest they make you sin against me, for if you serve their gods, it will surely be a snare to you."

"THE BOOK OF ECCLESIASTES" Chapter Two by Mark Copeland