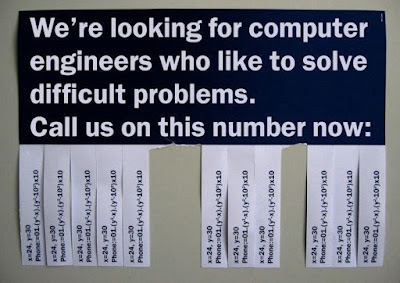 I know people do things differently, but WOW; A math equation for a phone number? How freaky is this? Since I am not good with math, I asked my friend Bruce Arnold for the solution. This is what he gave me:

I am very glad that God is a little more straightforward:
Jer 29:11 For I know the thoughts that I think toward you, says Yahweh, thoughts of peace, and not of evil, to give you hope in your latter end.
Jer 29:12 You shall call on me, and you shall go and pray to me, and I will listen to you.
Jer 29:13 You shall seek me, and find me, when you shall search for me with all your heart.
World English Bible

If you picked verse 12, you were right; verse 13 is for emphasis! All you need is a desiring heart, persistence and the knowledge that God will listen. Did I hear a ring? Got to go, maybe its someone returning my call! I wonder WHO IT COULD BE?
Email ThisBlogThis!Share to TwitterShare to FacebookShare to Pinterest

I frankly have no idea how this picture was made, but it says "upside down" to me. In a way, it like what is happening in the United States. Actions that were reprehensible in the 50's are now the norm; its as if good is bad and bad is good. Listen to the news, you will hear about corruption at every level of society! When I saw this picture I thought of the following passage of scripture from the book of Acts:
Act 17:1 Now when they had passed through Amphipolis, and Apollonia, they came to Thessalonica, where was a synagogue of the Jews.
Act 17:2 And Paul, as his manner was, went in to them, and on three sabbaths reasoned with them out of the scriptures,
Act 17:3 Opening and alledging, that it was needful that Christ should suffer, and rise again from the dead; and that this Jesus, whom I preach to you, is Christ.
Act 17:4 And some of them believed, and consorted with Paul and Silas: and of the devout Greeks a great multitude, and of the chief women not a few.
Act 17:5 But the Jews who believed not, moved with envy, took to them certain vile fellows of the baser sort, and gathered a company, and set all the city in an uproar, and assaulted the house of Jason, and sought to bring them out to the people.
Act 17:6 And when they found them not, they drew Jason and certain brethren to the rulers of the city, crying, These that have turned the world upside down, have come hither also;
Act 17:7 Whom Jason hath received: and these all do contrary to the decrees of Cesar, saying, That there is another king, one Jesus.
The Webster Bible
There is another king and his name is Jesus. But, today the name of Jesus is being eradicated from our schools, government, and the very streets of the nation. How can this be? Complacency is the answer. America places too much emphasis on possessions, sex and the acceptance of other world views and not enough on the proclamation of Christ in every aspect of our society. This nation has allowed the media, the courts and the schools to attack the Christian message. The world is being turned upside down, but in the wrong way. There is hope, however and it begins with each of us as individuals. Each one of us can change things, but we have to be serious about what we believe and find something to do about it. How you turn the world right side up is up to you, but here is a clue to getting started: Jesus and he alone is king, find a way to let that be known and just do it. Leave the photography to someone else!
Email ThisBlogThis!Share to TwitterShare to FacebookShare to Pinterest

OK, you come to this stop sign and what do you do? Which sign takes precedence? Good question! If you obey one, then you disobey the other; no matter what you do, you are wrong! There are a lot of things like this in life and sooner or later you will encounter them. For instance, how to discipline your children without breaking the current laws, how to handle someones else's road rage, or what to do if someone butts in line ahead of you at the local Wallmart? The examples could be endless, but I think you get the idea. There are times when we simply don't know what to do. Then what? Consider just a few verses from the Bible:

Jdg 21:25 In those days there was no king in Israel: every man did that which was right in his own eyes.
Joh 1:49 Nathanael answered and said to him, Rabbi, thou art the Son of God; thou art the King of Israel.
The Webster Bible
The answer to these situations is both complex and simple. Complex in that every situation is different, yet one thing is certain, everyone can't be right (Judges 21:25). The simplicity of it begins with the realization of who Jesus is (John 1:49) and what that means to us. Once John 1:49 really impacts our lives, we are no longer without direction, but have guidance in our lives. A good question to ask ourselves is: What would Jesus do? What about the conflicting signs? Well, the bottom sign probably means there is to be no stopping along that stretch of road for safety reasons and the top sign means STOP!! So, STOP, but don't STOP (park) on the side of the road. How do I know this? Well, Jesus always looked for the reasons BEHIND WHAT WAS HAPPENING, that's how. Get to know him and try to think like him... you will learn to find the answers. That's why followers of Jesus are called disciples, (which means those who learn) they learn from Jesus. Stop, but don't stop (learning)!
Email ThisBlogThis!Share to TwitterShare to FacebookShare to Pinterest
Newer Posts Older Posts Home
Subscribe to: Posts (Atom)