Its going to be alright 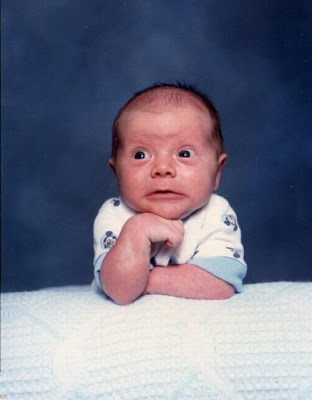 This little guy has a look on his face which seems to say: What's next? or perhaps.. You are going to do What? One thing is for certain, he is filled with apprehension and concern. Which reminds me of a situation in the New Testament.

Luke 22:47-62 WEB (R)
(47) While he was still speaking, behold, a multitude, and he who was called Judas, one of the twelve, was leading them. He came near to Jesus to kiss him.
(48) But Jesus said to him, "Judas, do you betray the Son of Man with a kiss?"
(49) When those who were around him saw what was about to happen, they said to him, "Lord, shall we strike with the sword?"
(50) A certain one of them struck the servant of the high priest, and cut off his right ear.
(51) But Jesus answered, "Let me at least do this" -and he touched his ear, and healed him.
(52) Jesus said to the chief priests, captains of the temple, and elders, who had come against him, "Have you come out as against a robber, with swords and clubs?
(53) When I was with you in the temple daily, you didn't stretch out your hands against me. But this is your hour, and the power of darkness."
(54) They seized him, and led him away, and brought him into the high priest's house. But Peter followed from a distance.
(55) When they had kindled a fire in the middle of the courtyard, and had sat down together, Peter sat among them.
(56) A certain servant girl saw him as he sat in the light, and looking intently at him, said, "This man also was with him."
(57) He denied Jesus, saying, "Woman, I don't know him."
(58) After a little while someone else saw him, and said, "You also are one of them!" But Peter answered, "Man, I am not!"
(59) After about one hour passed, another confidently affirmed, saying, "Truly this man also was with him, for he is a Galilean!"
(60) But Peter said, "Man, I don't know what you are talking about!" Immediately, while he was still speaking, a rooster crowed.
(61) The Lord turned, and looked at Peter. Then Peter remembered the Lord's word, how he said to him, "Before the rooster crows you will deny me three times."
(62) He went out, and wept bitterly.

Jesus is betrayed and taken away. Can you imagine what is going through the minds of Jesus' disciples? Even Peter loses it!! There are times when we all fall short of our potential; when we wish we had the courage to do the things we know we should, but somehow fail. Peter failed. Peter remembered what Jesus had told him and wept bitterly, but later on was comforted by the resurrection. No matter how bad things are God always has a way of bringing us back to him. To the little guy in the picture I would say: hang in there, its going to be alright... and it will.
Email ThisBlogThis!Share to TwitterShare to FacebookShare to Pinterest
Newer Posts Older Posts Home
Subscribe to: Posts (Atom)