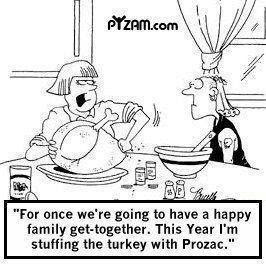 The holiday season is a tough time for some people.  When you have to face the reality of your own personal life against the idealized one portrayed in movies like "Its a wonderful life" or the "Miracle on 34th street" or a dozen other holiday films, it can get pretty depressing. So, while the picture is a bit exaggerated, the truth behind it is that many will resort to Prozac or other anti-depressants to make it through the next week or so.  And don't forget Alcohol, because its the drug of choice this time of year.  Instead of all this, why not do something different; read the book of Ephesians and consider that the things of true value are already awaiting you in the heavenly realms...
World English Bible: Ephesians Chapter 3

[1] For this cause I, Paul, am the prisoner of Christ Jesus on behalf of you Gentiles, [2] if it is so that you have heard of the administration of that grace of God which was given me toward you; [3] how that by revelation the mystery was made known to me, as I wrote before in few words, [4] by which, when you read, you can perceive my understanding in the mystery of Christ; [5] which in other generations was not made known to the children of men, as it has now been revealed to his holy apostles and prophets in the Spirit; [6] that the Gentiles are fellow heirs, and fellow members of the body, and fellow partakers of his promise in Christ Jesus through the Good News, [7] of which I was made a servant, according to the gift of that grace of God which was given me according to the working of his power. [8] To me, the very least of all saints, was this grace given, to preach to the Gentiles the unsearchable riches of Christ, [9] and to make all men see what is the administration of the mystery which for ages has been hidden in God, who created all things through Jesus Christ; [10] to the intent that now through the assembly the manifold wisdom of God might be made known to the principalities and the powers in the heavenly places, [11] according to the eternal purpose which he purposed in Christ Jesus our Lord; [12] in whom we have boldness and access in confidence through our faith in him. [13] Therefore I ask that you may not lose heart at my troubles for you, which are your glory.

[14] For this cause, I bow my knees to the Father of our Lord Jesus Christ, [15] from whom every family in heaven and on earth is named, [16] that he would grant you, according to the riches of his glory, that you may be strengthened with power through his Spirit in the inward man; [17] that Christ may dwell in your hearts through faith; to the end that you, being rooted and grounded in love, [18] may be strengthened to comprehend with all the saints what is the breadth and length and height and depth, [19] and to know Christ’s love which surpasses knowledge, that you may be filled with all the fullness of God. [20] Now to him who is able to do exceedingly abundantly above all that we ask or think, according to the power that works in us, [21] to him be the glory in the assembly and in Christ Jesus to all generations forever and ever. Amen.
God has given to all us Gentiles hope and love.  Personally, in the form of Jesus and by association our brethren in the church.  This love is not just for the next few days, but is year-round.  The fancy word Ubiquitous really does apply!!!  God's love never stops or changes its mind, never gets bored with you or criticizes your waistline or your hair (or the lack of it).  God loves you and that is the idealized reality.  So, who needs chemical help when faced with this pleasant situation?  Maybe those who do not know Jesus?  In a few days you may actually be sitting down for a meal with some of them, so make an effort to be nice.  Who knows, they might understand God's love if they see it in you?  Try showing it to them, it couldn't hurt!!!
Email ThisBlogThis!Share to TwitterShare to FacebookShare to Pinterest


Rev 5:1 I saw, in the right hand of him who sat on the throne, a book written inside and outside, sealed shut with seven seals.
Rev 5:2 I saw a mighty angel proclaiming with a loud voice, "Who is worthy to open the book, and to break its seals?"
Rev 5:3 No one in heaven above, or on the earth, or under the earth, was able to open the book, or to look in it.
Rev 5:4 And I wept much, because no one was found worthy to open the book, or to look in it.
Rev 5:5 One of the elders said to me, "Don't weep. Behold, the Lion who is of the tribe of Judah, the Root of David, has overcome; he who opens the book and its seven seals."
Rev 5:6 I saw in the midst of the throne and of the four living creatures, and in the midst of the elders, a Lamb standing, as though it had been slain, having seven horns, and seven eyes, which are the seven Spirits of God, sent out into all the earth.
Rev 5:7 Then he came, and he took it out of the right hand of him who sat on the throne.
Rev 5:8 Now when he had taken the book, the four living creatures and the twenty-four elders fell down before the Lamb, each one having a harp, and golden bowls full of incense, which are the prayers of the saints.
Rev 5:9 They sang a new song, saying, "You are worthy to take the book, and to open its seals: for you were killed, and bought us for God with your blood, out of every tribe, language, people, and nation,
Rev 5:10 and made us kings and priests to our God, and we will reign on earth."
Rev 5:11 I saw, and I heard something like a voice of many angels around the throne, the living creatures, and the elders; and the number of them was ten thousands of ten thousands, and thousands of thousands;
Rev 5:12 saying with a loud voice, "Worthy is the Lamb who has been killed to receive the power, wealth, wisdom, strength, honor, glory, and blessing!"
Rev 5:13 I heard every created thing which is in heaven, on the earth, under the earth, on the sea, and everything in them, saying, "To him who sits on the throne, and to the Lamb be the blessing, the honor, the glory, and the dominion, forever and ever! Amen!"
Rev 5:14 The four living creatures said, "Amen!" The elders fell down and worshiped.


Rev 6:1 I saw that the Lamb opened one of the seven seals, and I heard one of the four living creatures saying, as with a voice of thunder, "Come and see!"
Rev 6:2 And behold, a white horse, and he who sat on it had a bow. A crown was given to him, and he came forth conquering, and to conquer.
Rev 6:3 When he opened the second seal, I heard the second living creature saying, "Come!"
Rev 6:4 Another came forth, a red horse. To him who sat on it was given power to take peace from the earth, and that they should kill one another. There was given to him a great sword.
Rev 6:5 When he opened the third seal, I heard the third living creature saying, "Come and see!" And behold, a black horse, and he who sat on it had a balance in his hand.
Rev 6:6 I heard a voice in the midst of the four living creatures saying, "A choenix of wheat for a denarius, and three choenix of barley for a denarius! Don't damage the oil and the wine!"
Rev 6:7 When he opened the fourth seal, I heard the fourth living creature saying, "Come and see!"
Rev 6:8 And behold, a pale horse, and he who sat on it, his name was Death. Hades followed with him. Authority over one fourth of the earth, to kill with the sword, with famine, with death, and by the wild animals of the earth was given to him.
Rev 6:9 When he opened the fifth seal, I saw underneath the altar the souls of those who had been killed for the Word of God, and for the testimony of the Lamb which they had.
Rev 6:10 They cried with a loud voice, saying, "How long, Master, the holy and true, until you judge and avenge our blood on those who dwell on the earth?"
Rev 6:11 A long white robe was given to each of them. They were told that they should rest yet for a while, until their fellow servants and their brothers, who would also be killed even as they were, should complete their course.
Rev 6:12 I saw when he opened the sixth seal, and there was a great earthquake. The sun became black as sackcloth made of hair, and the whole moon became as blood.
Rev 6:13 The stars of the sky fell to the earth, like a fig tree dropping its unripe figs when it is shaken by a great wind.
Rev 6:14 The sky was removed like a scroll when it is rolled up. Every mountain and island were moved out of their places.
Rev 6:15 The kings of the earth, the princes, the commanding officers, the rich, the strong, and every slave and free person, hid themselves in the caves and in the rocks of the mountains.
Rev 6:16 They told the mountains and the rocks, "Fall on us, and hide us from the face of him who sits on the throne, and from the wrath of the Lamb,
Rev 6:17 for the great day of his wrath has come; and who is able to stand?"

Does the Lord's house lie in ruins by Mark Copeland