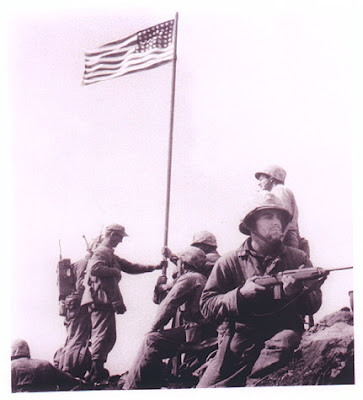 I know, I know, YESTERDAY was memorial day!  However, I didn't see this one until today.  This could another picture of Iwo Jima, or maybe not.  Anyway, it appears to be a World War II picture celebrating a military victory.  Honestly, I don't think much of war... all that dying and pain, just seems so unnecessary!  On the other hand, World War II was necessary because it went beyond ideology to the point of genocide!!! I thank God it is over and wish all wars were over for ever.  For Christians, we can see the final outcome as being won, but unfortunately sin still remains in this world.  Its an odd situation, but we have victory BEFORE THE WAR IS OVER!!!  Read on to see what I mean...

1 Corinthians, Chapter 15
51 Behold, I tell you a mystery. We will not all sleep, but we will all be changed, 52 in a moment, in the twinkling of an eye, at the last trumpet. For the trumpet will sound, and the dead will be raised incorruptible, and we will be changed. 53 For this corruptible must put on incorruption, and this mortal must put on immortality.  54 But when this corruptible will have put on incorruption, and this mortal will have put on immortality, then what is written will happen:“Death is swallowed up in victory.”  55 “Death, where is your sting?Hades, where is your victory?”  56 The sting of death is sin, and the power of sin is the law.  57 But thanks be to God, who gives us the victory through our Lord Jesus Christ.

Death!!!  Morbid and cruel, it takes us all.  It does not respect genius or innocence and ignores fairness; it just happens.  No one wants to die; except perhaps those in the final stages of some dreadfully painful terminal disease.  However, God has ultimately solved the problem of death in the sacrifice of Jesus.  Victory is ours; believe it because its true.  You do not have to waive a flag, you just have to believe God and obey his will.  If you haven't done this, now would be a good time.  Turn to the book of Acts and read chapter two.  Follow the directions...live forever!!!
Email ThisBlogThis!Share to TwitterShare to FacebookShare to Pinterest