Is this a church? 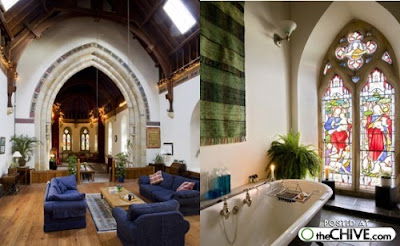 Seems a little odd, doesn't it?  After all, who ever heard of someone living in a church building?  Strangely enough, I have.  I grew up in a little town in upstate New York called Melrose.  The Lutheran church there sold its building in the early seventies to move to Spiegletown and so someone made the church into a home.  Like the picture, they left the stained glass windows intact and I always wondered what the inside looked like?  Perhaps something like this picture???  So, did the early church meet in homes?  The following passages show they did, and not just in one location either...
WEB: Romans 16:5. Greet the assembly that is in their house. Greet Epaenetus, my beloved, who is the first fruits of Achaia to Christ.
KJV: Romans 16:5. Likewise greet the church that is in their house. Salute my wellbeloved Epaenetus, who is the firstfruits of Achaia unto Christ.
-----
WEB: Romans 16:23. Gaius, my host and host of the whole assembly, greets you. Erastus, the treasurer of the city, greets you, as does Quartus, the brother.
KJV: Romans 16:23. Gaius mine host, and of the whole church, saluteth you. Erastus the chamberlain of the city saluteth you, and Quartus a brother.
-----
WEB: Colossians 4:15. Greet the brothers who are in Laodicea, and Nymphas, and the assembly that is in his house.
KJV: Colossians 4:15. Salute the brethren which are in Laodicea, and Nymphas, and the church which is in his house.
-----
WEB: Philemon 1:2. to the beloved Apphia, to Archippus, our fellow soldier, and to the assembly in your house:
KJV: Philemon 1:2. And to our beloved Apphia, and Archippus our fellowsoldier, and to the church in thy house:
The underlined words in the above passages reflect a translation of the greek word "ekklesia".  Here is what Strongs Bible dictionary has to say on this...
Strongs 1577: ekklesia
from ek, "out of," and klesis, "a calling" (kaleo, "to call"), was used among the Greeks of a body of citizens "gathered" to discuss the affairs of state, Acts 19:39. In the Sept. it is used to designate the "gathering" of Israel, summoned for any definite purpose, or a "gathering" regarded as representative of the whole nation. In Acts 7:38 it is used of Israel; in 19:32,41, of a riotous mob. It has two applications to companies of Christians, (a) to the whole company of the redeemed throughout the present era, the company of which Christ said, "I will build My Church," Matt. 16:18, and which is further described as "the Church which is His Body," Eph. 1:22; 5:23, (b) in the singular number (e.g., Matt. 18:17, RV marg., "congregation"), to a company consisting of professed believers, e.g., Acts 20:28; 1Cor. 1:2; Gal. 1:13; 1Thess. 1:1; 2Thess. 1:1; 1Tim. 3:5, and in the plural, with reference to churches in a district.

There is an apparent exception in the RV of Acts 9:31, where, while the AV has "churches," the singular seems to point to a district; but the reference is clearly to the church as it was in Jerusalem, from which it had just been scattered, Acts 8:1. Again, in Rom. 16:23, that Gaius was the host of "the whole church," simply suggests that the "assembly" in Corinth had been accustomed to meet in his house, where also Paul was entertained.
I know, this is a bit intense, but the point is that "Churches" are people, not buildings.  There is nothing holy about wood, stone, mortar or shingles, but the people who follow Jesus are made that way by his sacrificial life-gift.  Now, I really do not have anything against beautiful building and I absolutely love leaded windows, but our emphasis should be placed on people because that is where true holiness resides.  Christians could still meet in the converted church as shown in the picture and look there even is a baptistery (bathtub)!!!!
Email ThisBlogThis!Share to TwitterShare to FacebookShare to Pinterest

"THE BOOK OF DANIEL" Chapter Twelve by Mark Copeland