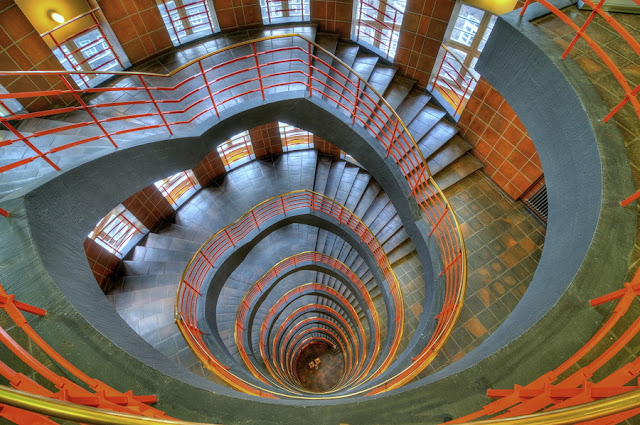 Monday, one of my granddaughters came for a visit and as usual, I was on the computer looking for pictures to use for this blog.  We chatted for some time and then I started to show her my collection.  When she came to this one, she backed away and said it made her dizzy.  It was just too much for her to take in; she realized it and had to stop looking.  Sometimes I feel like I have to stop whatever I am doing because it overwhelms me.  And I am NOT TALKING ABOUT HEIGHTS, either.  God's ways are so far beyond our ways that it can be almost dizzing to think about.  Take the patriarch Job, for instance.  He suffered even though he was good and could not understand why he had to undergo the agonies that were almost too much for him.  Job argues with his "friends" throughout most of the book, but towards the end of it, he appeals directly to God himself... and gets an answer....

Job, Chapter 40
1 Moreover Yahweh answered Job,   2 “Shall he who argues contend with the Almighty?He who argues with God, let him answer it.”  3  Then Job answered Yahweh,   4 “Behold, I am of small account. What shall I answer you?I lay my hand on my mouth.  5 I have spoken once, and I will not answer;Yes, twice, but I will proceed no further.”  6  Then Yahweh answered Job out of the whirlwind,   7 “Now brace yourself like a man.I will question you, and you will answer me.  8 Will you even annul my judgment?Will you condemn me, that you may be justified?  9 Or do you have an arm like God?Can you thunder with a voice like him?  10 “Now deck yourself with excellency and dignity.Array yourself with honor and majesty.  11 Pour out the fury of your anger.Look at everyone who is proud, and bring him low.  12 Look at everyone who is proud, and humble him.Crush the wicked in their place.  13 Hide them in the dust together.Bind their faces in the hidden place.  14 Then I will also admit to youthat your own right hand can save you.  15 “See now, behemoth, which I made as well as you.He eats grass as an ox.  16 Look now, his strength is in his thighs.His force is in the muscles of his belly.  17 He moves his tail like a cedar.The sinews of his thighs are knit together.  18 His bones are like tubes of brass.His limbs are like bars of iron.  19 He is the chief of the ways of God.He who made him gives him his sword.  20 Surely the mountains produce food for him,where all the animals of the field play.  21 He lies under the lotus trees,in the covert of the reed, and the marsh.  22 The lotuses cover him with their shade.The willows of the brook surround him.  23 Behold, if a river overflows, he doesn’t tremble.He is confident, though the Jordan swells even to his mouth.  24 Shall any take him when he is on the watch,or pierce through his nose with a snare?
Job, Chapter 41
1 “Can you draw out Leviathan with a fish hook,
or press down his tongue with a cord?  2 Can you put a rope into his nose,or pierce his jaw through with a hook?  3 Will he make many petitions to you,or will he speak soft words to you?  4 Will he make a covenant with you,that you should take him for a servant forever?  5 Will you play with him as with a bird?Or will you bind him for your girls?  6 Will traders barter for him?Will they part him among the merchants?  7 Can you fill his skin with barbed irons,or his head with fish spears?  8 Lay your hand on him.Remember the battle, and do so no more.  9 Behold, the hope of him is in vain.Won’t one be cast down even at the sight of him?  10 None is so fierce that he dare stir him up.Who then is he who can stand before me?  11 Who has first given to me, that I should repay him?Everything under the heavens is mine.  12 “I will not keep silence concerning his limbs,nor his mighty strength, nor his goodly frame.  13 Who can strip off his outer garment?Who shall come within his jaws?  14 Who can open the doors of his face?Around his teeth is terror.  15 Strong scales are his pride,shut up together with a close seal.  16 One is so near to another,that no air can come between them.  17 They are joined one to another.They stick together, so that they can’t be pulled apart.  18 His sneezing flashes out light.His eyes are like the eyelids of the morning.  19 Out of his mouth go burning torches.Sparks of fire leap out.  20 Out of his nostrils a smoke goes,as of a boiling pot over a fire of reeds.  21 His breath kindles coals.A flame goes out of his mouth.  22 There is strength in his neck.Terror dances before him.  23 The flakes of his flesh are joined together.They are firm on him.They can’t be moved.  24 His heart is as firm as a stone,yes, firm as the lower millstone.  25 When he raises himself up, the mighty are afraid.They retreat before his thrashing.  26 If one attacks him with the sword, it can’t prevail;nor the spear, the dart, nor the pointed shaft.  27 He counts iron as straw;and brass as rotten wood.  28 The arrow can’t make him flee.Sling stones are like chaff to him.  29 Clubs are counted as stubble.He laughs at the rushing of the javelin.  30 His undersides are like sharp potsherds,leaving a trail in the mud like a threshing sledge.  31 He makes the deep to boil like a pot.He makes the sea like a pot of ointment.  32 He makes a path shine after him.One would think the deep had white hair.  33 On earth there is not his equal,that is made without fear.  34 He sees everything that is high.He is king over all the sons of pride.”
Job, Chapter 42
1 Then Job answered Yahweh,   2 “I know that you can do all things,and that no purpose of yours can be restrained.  3 You asked, ‘Who is this who hides counsel without knowledge?’therefore I have uttered that which I did not understand,things too wonderful for me, which I didn’t know.  4 You said, ‘Listen, now, and I will speak;I will question you, and you will answer me.’  5 I had heard of you by the hearing of the ear,but now my eye sees you.  6 Therefore I abhor myself,and repent in dust and ashes.”

OK, I know this is a long passage, but in spite of that, it really is worth reading.  Job finally realizes that he is but a mere man compared to the awesome majesty and power of the Almighty God of all the Earth.  It is just too much for him to take in and he finally understands.  At this revelation of God, Job repents and the rest of the book shows how God blesses him!!!  Today, human beings know so much, but understand so little.  We have confused knowledge with status.  God is God and we are merely his creatures.  Are you having problems?  More questions than answers in your life?  Seek God with humility and HE will bless you for it!!!  And now, I will probably spend most of the day thinking about applying this to myself.  May you do the same!!!
Email ThisBlogThis!Share to TwitterShare to FacebookShare to Pinterest
Newer Posts Older Posts Home
Subscribe to: Posts (Atom)