Smarter than the average cat.... 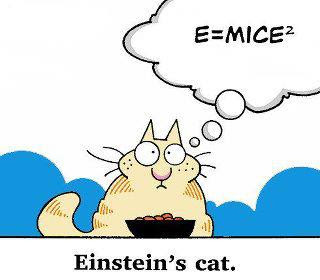 Einstein was a brilliant man, as whole world acknowledges.  It must have been a blessing to just have been around him.  Not only was he intelligent to the extreme, but he had a humorous side as well.  So, I wonder what you would learn if you stayed with him awhile???  Take his cat for instance; what tidbits of wisdom could HE have absorbed???  No idea, whatsoever.  But, when it comes to knowledge, I know where to start...

Proverbs, Chapter 1
7 The fear of Yahweh is the beginning of knowledge;but the foolish despise wisdom and instruction.

Think you are smart? Do others look to you for answers?  Have your years given you wisdom?  What you think you have is nothing if God is not part of the "equation".  Knowledge is far more than the ability to do math or physics or quote from great philosophers from ancient times.  Knowledge expands into wisdom when what you know matures into the ability to understand it in the context of eternity.  A cat will always be a cat and mice (squared or not) will be one of the highlights of its life.  Humans were created by God and the truly intelligent among us will seek eternity to complete their understanding of life.  This begins by seeking God and acknowledging HIM as the ruler of the universe.  Of course, you could reject this and take pride in what you know, but then your foolishness would exceed that cute cat in the cartoon.  Your choice!!!!

Act 17:1 Now when they had passed through Amphipolis and Apollonia, they came to Thessalonica, where there was a Jewish synagogue.
Act 17:2 Paul, as was his custom, went in to them, and for three Sabbath days reasoned with them from the Scriptures,
Act 17:3 explaining and demonstrating that the Christ had to suffer and rise again from the dead, and saying, "This Jesus, whom I proclaim to you, is the Christ."
Act 17:4 Some of them were persuaded, and joined Paul and Silas, of the devout Greeks a great multitude, and not a few of the chief women.
Act 17:5 But the unpersuaded Jews took along some wicked men from the marketplace, and gathering a crowd, set the city in an uproar. Assaulting the house of Jason, they sought to bring them out to the people.
Act 17:6 When they didn't find them, they dragged Jason and certain brothers before the rulers of the city, crying, "These who have turned the world upside down have come here also,
Act 17:7 whom Jason has received. These all act contrary to the decrees of Caesar, saying that there is another king, Jesus!"
Act 17:8 The multitude and the rulers of the city were troubled when they heard these things.
Act 17:9 When they had taken security from Jason and the rest, they let them go.
Act 17:10 The brothers immediately sent Paul and Silas away by night to Beroea. When they arrived, they went into the Jewish synagogue.
Act 17:11 Now these were more noble than those in Thessalonica, in that they received the word with all readiness of the mind, examining the Scriptures daily to see whether these things were so.
Act 17:12 Many of them therefore believed; also of the prominent Greek women, and not a few men.
Act 17:13 But when the Jews of Thessalonica had knowledge that the word of God was proclaimed by Paul at Beroea also, they came there likewise, agitating the multitudes.
Act 17:14 Then the brothers immediately sent out Paul to go as far as to the sea, and Silas and Timothy still stayed there.
Act 17:15 But those who escorted Paul brought him as far as Athens. Receiving a commandment to Silas and Timothy that they should come to him very quickly, they departed.
Act 17:16 Now while Paul waited for them at Athens, his spirit was provoked within him as he saw the city full of idols.
Act 17:17 So he reasoned in the synagogue with the Jews and the devout persons, and in the marketplace every day with those who met him.
Act 17:18 Some of the Epicurean and Stoic philosophers also were conversing with him. Some said, "What does this babbler want to say?" Others said, "He seems to be advocating foreign deities," because he preached Jesus and the resurrection.
Act 17:19 They took hold of him, and brought him to the Areopagus, saying, "May we know what this new teaching is, which is spoken by you?
Act 17:20 For you bring certain strange things to our ears. We want to know therefore what these things mean."
Act 17:21 Now all the Athenians and the strangers living there spent their time in nothing else, but either to tell or to hear some new thing.
Act 17:22 Paul stood in the middle of the Areopagus, and said, "You men of Athens, I perceive that you are very religious in all things.
Act 17:23 For as I passed along, and observed the objects of your worship, I found also an altar with this inscription: 'TO AN UNKNOWN GOD.' What therefore you worship in ignorance, this I announce to you.
Act 17:24 The God who made the world and all things in it, he, being Lord of heaven and earth, doesn't dwell in temples made with hands,
Act 17:25 neither is he served by men's hands, as though he needed anything, seeing he himself gives to all life and breath, and all things.
Act 17:26 He made from one blood every nation of men to dwell on all the surface of the earth, having determined appointed seasons, and the boundaries of their dwellings,
Act 17:27 that they should seek the Lord, if perhaps they might reach out for him and find him, though he is not far from each one of us.
Act 17:28 'For in him we live, and move, and have our being.' As some of your own poets have said, 'For we are also his offspring.'
Act 17:29 Being then the offspring of God, we ought not to think that the Divine Nature is like gold, or silver, or stone, engraved by art and design of man.
Act 17:30 The times of ignorance therefore God overlooked. But now he commands that all people everywhere should repent,
Act 17:31 because he has appointed a day in which he will judge the world in righteousness by the man whom he has ordained; of which he has given assurance to all men, in that he has raised him from the dead."
Act 17:32 Now when they heard of the resurrection of the dead, some mocked; but others said, "We want to hear you again concerning this."
Act 17:33 Thus Paul went out from among them.
Act 17:34 But certain men joined with him, and believed, among whom also was Dionysius the Areopagite, and a woman named Damaris, and others with them.

"THE SECOND EPISTLE TO THE CORINTHIANS" Chapter Nine by Mark Copeland