A star, a bow and an attitude 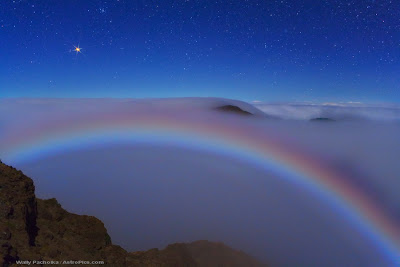 This picture was taken high atop a mountain in Hawaii. The two points of interest (besides the mountains and the sheer altitude that the picture was taken) is the bright star at the left (Mars at its closest to Earth) and the rainbow which is really not a rainbow called a fog bow. Understanding how Mars can be so bright is easy because of its closeness to Earth, but the fog bow?? Frankly, I am not sure I understand the reasons for its formation, but I know such a thing exists and perhaps someday I will do the research and know. But not today; I am tired and just don't feel up to it. Ever feel like that? You have just had enough and need to come to an acceptance of truth without knowing everything. If you have, then you and the patriarch Job have something in common. Here is an interesting passage from the book that bears his name.
Job 42:1-8 WEB (R)
(1) Then Job answered Yahweh,
(2) "I know that you can do all things, and that no purpose of yours can be restrained.
(3) You asked, 'Who is this who hides counsel without knowledge?' therefore I have uttered that which I did not understand, things too wonderful for me, which I didn't know.
(4) You said, 'Listen, now, and I will speak; I will question you, and you will answer me.'
(5) I had heard of you by the hearing of the ear, but now my eye sees you.
(6) Therefore I abhor myself, and repent in dust and ashes."
(7) It was so, that after Yahweh had spoken these words to Job, Yahweh said to Eliphaz the Temanite, "My wrath is kindled against you, and against your two friends; for you have not spoken of me the thing that is right, as my servant Job has.
(8) Now therefore, take to yourselves seven bulls and seven rams, and go to my servant Job, and offer up for yourselves a burnt offering; and my servant Job shall pray for you, for I will accept him, that I not deal with you according to your folly. For you have not spoken of me the thing that is right, as my servant Job has."


For me, the book of Job has always been a hard one to read because of the complexity of the argumentation and the wordiness of it. Yes, even I have my limits and although I like to think I understand the book, yet its middle eastern methods of expression I find difficult at times. This much is certain, Job reaches a point of humility and repentance, which is exactly where he needed to be. God gives him credit for speaking that which is right and the question of why do the righteous suffer is resolved in the answer that only God really knows. Its not up to us to know everything; you can't. What we all can do is trust God and do the right thing. You see it really doesn't matter how God makes a rainbow or a fog bow for that matter; but it does matter how we respond to him. Therein lies true the true beauty of the human being and that is better than the brightest star in heaven or the most unusual bow we may ever be blessed to see.
Email ThisBlogThis!Share to TwitterShare to FacebookShare to Pinterest 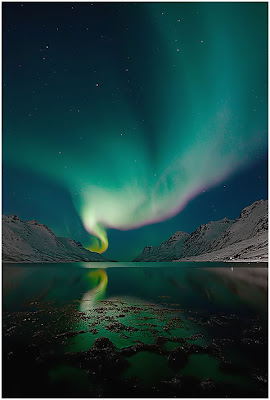 Since I was a boy I have loved to look at the heavens. Its hard not to gaze at them for long without thinking of their organization and creation. People for thousands of years have perceived shapes, patterns and signs written upon the the skies. I have grown especially fond of the "Northern lights" over the years and marvel at their patterns and eerie glow. This picture caught my eye, not because of the lights (although they are beautiful!!), but rather because of their reflection on the water. This reverse image looks like "Nessie" to me; crazy, I know, but, but, it does! No, I am not out of my mind, just a bit imaginative this early in the morning. All this reminds me of a passage in the book of Acts, where Paul was thought to be "crazy".


Act 26:1-32
(1) Agrippa said to Paul, "You may speak for yourself." Then Paul stretched out his hand, and made his defense.
(2) "I think myself happy, King Agrippa, that I am to make my defense before you this day concerning all the things that I am accused by the Jews,
(3) especially because you are expert in all customs and questions which are among the Jews. Therefore I beg you to hear me patiently.
(4) "Indeed, all the Jews know my way of life from my youth up, which was from the beginning among my own nation and at Jerusalem;
(5) having known me from the first, if they are willing to testify, that after the strictest sect of our religion I lived a Pharisee.
(6) Now I stand here to be judged for the hope of the promise made by God to our fathers,
(7) which our twelve tribes, earnestly serving night and day, hope to attain. Concerning this hope I am accused by the Jews, King Agrippa!
(8) Why is it judged incredible with you, if God does raise the dead?
(9) "I myself most certainly thought that I ought to do many things contrary to the name of Jesus of Nazareth.
(10) This I also did in Jerusalem. I both shut up many of the saints in prisons, having received authority from the chief priests, and when they were put to death I gave my vote against them.
(11) Punishing them often in all the synagogues, I tried to make them blaspheme. Being exceedingly enraged against them, I persecuted them even to foreign cities.
(12) "Whereupon as I traveled to Damascus with the authority and commission from the chief priests,
(13) at noon, O King, I saw on the way a light from the sky, brighter than the sun, shining around me and those who traveled with me.
(14) When we had all fallen to the earth, I heard a voice saying to me in the Hebrew language, 'Saul, Saul, why are you persecuting me? It is hard for you to kick against the goads.'
(15) "I said, 'Who are you, Lord?' "He said, 'I am Jesus, whom you are persecuting.
(16) But arise, and stand on your feet, for I have appeared to you for this purpose: to appoint you a servant and a witness both of the things which you have seen, and of the things which I will reveal to you;
(17) delivering you from the people, and from the Gentiles, to whom I send you,
(18) to open their eyes, that they may turn from darkness to light and from the power of Satan to God, that they may receive remission of sins and an inheritance among those who are sanctified by faith in me.'
(19) "Therefore, King Agrippa, I was not disobedient to the heavenly vision,
(20) but declared first to them of Damascus, at Jerusalem, and throughout all the country of Judea, and also to the Gentiles, that they should repent and turn to God, doing works worthy of repentance.
(21) For this reason the Jews seized me in the temple, and tried to kill me.
(22) Having therefore obtained the help that is from God, I stand to this day testifying both to small and great, saying nothing but what the prophets and Moses said would happen,
(23) how the Christ must suffer, and how, by the resurrection of the dead, he would be first to proclaim light both to these people and to the Gentiles."
(24) As he thus made his defense, Festus said with a loud voice, "Paul, you are crazy! Your great learning is driving you insane!"
(25) But he said, "I am not crazy, most excellent Festus, but boldly declare words of truth and reasonableness.
(26) For the king knows of these things, to whom also I speak freely. For I am persuaded that none of these things is hidden from him, for this has not been done in a corner.
(27) King Agrippa, do you believe the prophets? I know that you believe."
(28) Agrippa said to Paul, "With a little persuasion are you trying to make me a Christian?"
(29) Paul said, "I pray to God, that whether with little or with much, not only you, but also all that hear me this day, might become such as I am, except for these bonds."
(30) The king rose up with the governor, and Bernice, and those who sat with them.
(31) When they had withdrawn, they spoke one to another, saying, "This man does nothing worthy of death or of bonds."
(32) Agrippa said to Festus, "This man might have been set free if he had not appealed to Caesar."
Crazy? I think not! Paul's life was changed by God himself! But, to those who will not believe, well, they just will NOT BELIEVE! People see things the way they want to and that is that! Even when Agrippa realized that Paul really wasn't crazy, he still would not believe. Based on the facts however, he did realize his innocence. It is the facts of Christianity that make sense to me as well; for Jesus really did live, die and rise again. Testimony abounds as to this truth; and life for ever to those who obey its Gospel. I wish everyone could see both the truth and my "Nessie" as well, but I will settle for one out of two! Guess which one??
Email ThisBlogThis!Share to TwitterShare to FacebookShare to Pinterest
Newer Posts Older Posts Home
Subscribe to: Posts (Atom)