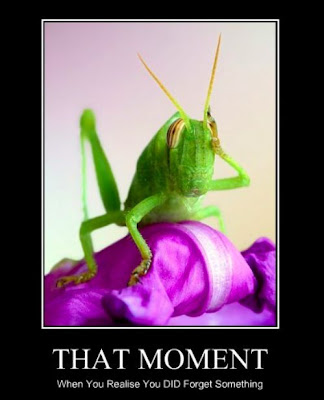 America is aging; the baby boomers are older now and the effect on society is significant!!!  I saw this picture and remembered yesterday; when I found myself in a room and didn't have the slightest idea why I was in there.  No big deal!  I was a bit surprised and that was it; period.  An hour later I remembered what I was going to do and by that time I had thought up something to add to my task, so things turned out much better than they would have in the first place.  Some things can be forgotten easily at any age, but when remembered can really make a difference in your life.  Check out what the apostle Peter says about this...
WEB: II Peter Chapter 3

[1] This is now, beloved, the second letter that I have written to you; and in both of them I stir up your sincere mind by reminding you; [2] that you should remember the words which were spoken before by the holy prophets, and the commandments of us, the apostles of the Lord and Savior: [3] knowing this first, that in the last days mockers will come, walking after their own lusts, [4] and saying, “Where is the promise of his coming? For, from the day that the fathers fell asleep, all things continue as they were from the beginning of the creation.” [5] For this they willfully forget, that there were heavens from of old, and an earth formed out of water and amid water, by the word of God; [6] by which means the world that then was, being overflowed with water, perished. [7] But the heavens that now are, and the earth, by the same word have been stored up for fire, being reserved against the day of judgment and destruction of ungodly men. [8] But don’t forget this one thing, beloved, that one day is with the Lord as a thousand years, and a thousand years as one day. [9] The Lord is not slow concerning his promise, as some count slowness; but is patient with us, not wishing that any should perish, but that all should come to repentance.
The other day I watched the movie Armageddon again.  The opening scene in which you see a picture of the Earth and Charlton Heston says something like... it has happened before and it will happen again.  He was referring to the Earth being hit by a six mile meteorite which nearly destroyed the planet.  His words resonated with me because we humans tend to forget things; and in times of prosperity... God.  Today, more than ever, we need to remember the past; that apostasy has happened before, just as it has become prevalent in this culture.  But, God is patient with us and in his own good time will sort everything out and make all right.  Don't forget... remember who HE is and what HE will do and some day (perhaps even today) you will be eternally glad you did.  Surprise!  God will bless you; only don't forget HIM!!!
Email ThisBlogThis!Share to TwitterShare to FacebookShare to Pinterest


Gen 34:1 Dinah, the daughter of Leah, whom she bore to Jacob, went out to see the daughters of the land.
Gen 34:2 Shechem the son of Hamor the Hivite, the prince of the land, saw her. He took her, lay with her, and humbled her.
Gen 34:3 His soul joined to Dinah, the daughter of Jacob, and he loved the young lady, and spoke kindly to the young lady.
Gen 34:4 Shechem spoke to his father, Hamor, saying, "Get me this young lady as a wife."
Gen 34:5 Now Jacob heard that he had defiled Dinah, his daughter; and his sons were with his livestock in the field. Jacob held his peace until they came.
Gen 34:6 Hamor the father of Shechem went out to Jacob to talk with him.
Gen 34:7 The sons of Jacob came in from the field when they heard it. The men were grieved, and they were very angry, because he had done folly in Israel in lying with Jacob's daughter; a which thing ought not to be done.
Gen 34:8 Hamor talked with them, saying, "The soul of my son, Shechem, longs for your daughter. Please give her to him as a wife.
Gen 34:9 Make marriages with us. Give your daughters to us, and take our daughters for yourselves.
Gen 34:10 You shall dwell with us, and the land will be before you. Live and trade in it, and get possessions in it."
Gen 34:11 Shechem said to her father and to her brothers, "Let me find favor in your eyes, and whatever you will tell me I will give.
Gen 34:12 Ask me a great amount for a dowry, and I will give whatever you ask of me, but give me the young lady as a wife."
Gen 34:13 The sons of Jacob answered Shechem and Hamor his father with deceit, and spoke, because he had defiled Dinah their sister,
Gen 34:14 and said to them, "We can't do this thing, to give our sister to one who is uncircumcised; for that is a reproach to us.
Gen 34:15 Only on this condition will we consent to you. If you will be as we are, that every male of you be circumcised;
Gen 34:16 then will we give our daughters to you, and we will take your daughters to us, and we will dwell with you, and we will become one people.
Gen 34:17 But if you will not listen to us, to be circumcised, then we will take our sister, and we will be gone."
Gen 34:18 Their words pleased Hamor and Shechem, Hamor's son.
Gen 34:19 The young man didn't wait to do this thing, because he had delight in Jacob's daughter, and he was honored above all the house of his father.
Gen 34:20 Hamor and Shechem, his son, came to the gate of their city, and talked with the men of their city, saying,
Gen 34:21 "These men are peaceful with us. Therefore let them live in the land and trade in it. For behold, the land is large enough for them. Let us take their daughters to us for wives, and let us give them our daughters.
Gen 34:22 Only on this condition will the men consent to us to live with us, to become one people, if every male among us is circumcised, as they are circumcised.
Gen 34:23 Won't their livestock and their possessions and all their animals be ours? Only let us give our consent to them, and they will dwell with us."
Gen 34:24 All who went out of the gate of his city listened to Hamor, and to Shechem his son; and every male was circumcised, all who went out of the gate of his city.
Gen 34:25 It happened on the third day, when they were sore, that two of Jacob's sons, Simeon and Levi, Dinah's brothers, each took his sword, came upon the unsuspecting city, and killed all the males.
Gen 34:26 They killed Hamor and Shechem, his son, with the edge of the sword, and took Dinah out of Shechem's house, and went away.
Gen 34:27 Jacob's sons came on the dead, and plundered the city, because they had defiled their sister.
Gen 34:28 They took their flocks, their herds, their donkeys, that which was in the city, that which was in the field,
Gen 34:29 and all their wealth. They took captive all their little ones and their wives, and took as plunder everything that was in the house.
Gen 34:30 Jacob said to Simeon and Levi, "You have troubled me, to make me odious to the inhabitants of the land, among the Canaanites and the Perizzites. I am few in number. They will gather themselves together against me and strike me, and I will be destroyed, I and my house."
Gen 34:31 They said, "Should he deal with our sister as with a prostitute?"
Email ThisBlogThis!Share to TwitterShare to FacebookShare to Pinterest

The Celebration of Christmas by Mark Copeland

http://executableoutlines.com/top/xmas.htm
What about the tradition? ... Gary
Email ThisBlogThis!Share to TwitterShare to FacebookShare to Pinterest
Newer Posts Older Posts Home
Subscribe to: Posts (Atom)