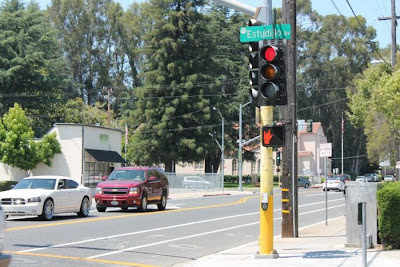 Nice suburban scene!  Beautiful sunny day!  Traffic is not too heavy, which makes for a pleasant commute!  By the look of the trees, it must be a northern state, but whether East or West, I don't know.  But, although this picture looks "normal", there is something that caught my eye; something that makes this picture quite unusual.  Have you guessed it yet? Hint: let me give you a hand.  Simple now, isn't it?  The stop sign has a "I love you" symbol on it!!!  This may in fact be common in some areas of our country, but honestly, I don't remember ever seeing it before!  What a nice thing to do!!!  Makes you almost want to pick-up-stakes and move there, doesn't it?  If even the street signs extend a warm greeting, what more could you want?  I can think of one thing and its found in the book of Matthew...

Matthew, Chapter 22
34 But hearing that He had silenced the Sadducees, the Pharisees were gathered together.  35 And one of them, a lawyer, questioned Him , testing Him, and saying, 36 Teacher, which is the great commandment in the Law?  37 And Jesus said to him, "You shall love the Lord your God with all your heart, and with all your soul, and with all your mind." Deut. 6:5  38 This is the first and great commandment.  39 And the second is like it: "You shall love your neighbor as yourself." Lev. 19:18  40 On these two commandments all the Law and the Prophets hang.
You guessed it... a love for God!!!  You will do a very good thing if you love your neighbor, but to love God, completes everything!!!  Why?  Because we all need God in our lives.  Think of it; without HIM there are no standards, no real absolutes, nothing to focus our lives on that will not change.  God designed us to seek him; that is why every culture that ever was has people who desire deity.  I suggest changing the sign: Place an upward arrow to the left of the I-L-Y sign!!!  Remember God loves you more that anyone you will ever meet AND LOVE HIM BACK!!!!!
Email ThisBlogThis!Share to TwitterShare to FacebookShare to Pinterest

Job 24:1 "Why aren't times laid up by the Almighty? Why don't those who know him see his days?
Job 24:2 There are people who remove the landmarks. They violently take away flocks, and feed them.
Job 24:3 They drive away the donkey of the fatherless, and they take the widow's ox for a pledge.
Job 24:4 They turn the needy out of the way. The poor of the earth all hide themselves.
Job 24:5 Behold, as wild donkeys in the desert, they go forth to their work, seeking diligently for food. The wilderness yields them bread for their children.
Job 24:6 They cut their provender in the field. They glean the vineyard of the wicked.
Job 24:7 They lie all night naked without clothing, and have no covering in the cold.
Job 24:8 They are wet with the showers of the mountains, and embrace the rock for lack of a shelter.
Job 24:9 There are those who pluck the fatherless from the breast, and take a pledge of the poor,
Job 24:10 So that they go around naked without clothing. Being hungry, they carry the sheaves.
Job 24:11 They make oil within the walls of these men. They tread wine presses, and suffer thirst.
Job 24:12 From out of the populous city, men groan. The soul of the wounded cries out, yet God doesn't regard the folly.
Job 24:13 "These are of those who rebel against the light. They don't know its ways, nor abide in its paths.
Job 24:14 The murderer rises with the light. He kills the poor and needy. In the night he is like a thief.
Job 24:15 The eye also of the adulterer waits for the twilight, saying, 'No eye shall see me.' He disguises his face.
Job 24:16 In the dark they dig through houses. They shut themselves up in the daytime. They don't know the light.
Job 24:17 For the morning is to all of them like thick darkness, for they know the terrors of the thick darkness.
Job 24:18 "They are foam on the surface of the waters. Their portion is cursed in the earth. They don't turn into the way of the vineyards.
Job 24:19 Drought and heat consume the snow waters, so does Sheol those who have sinned.
Job 24:20 The womb shall forget him. The worm shall feed sweetly on him. He shall be no more remembered. Unrighteousness shall be broken as a tree.
Job 24:21 He devours the barren who don't bear. He shows no kindness to the widow.
Job 24:22 Yet God preserves the mighty by his power. He rises up who has no assurance of life.
Job 24:23 God gives them security, and they rest in it. His eyes are on their ways.
Job 24:24 They are exalted; yet a little while, and they are gone. Yes, they are brought low, they are taken out of the way as all others, and are cut off as the tops of the ears of grain.
Job 24:25 If it isn't so now, who will prove me a liar, and make my speech worth nothing?"
Job 25:1 Then Bildad the Shuhite answered,
Job 25:2 "Dominion and fear are with him. He makes peace in his high places.
Job 25:3 Can his armies be counted? On whom does his light not arise?
Job 25:4 How then can man be just with God? Or how can he who is born of a woman be clean?
Job 25:5 Behold, even the moon has no brightness, and the stars are not pure in his sight;
Job 25:6 How much less man, who is a worm, the son of man, who is a worm!"
Job 26:1 Then Job answered,
Job 26:2 "How have you helped him who is without power! How have you saved the arm that has no strength!
Job 26:3 How have you counseled him who has no wisdom, and plentifully declared sound knowledge!
Job 26:4 To whom have you uttered words? Whose spirit came forth from you?
Job 26:5 "Those who are deceased tremble, those beneath the waters and all that live in them.
Job 26:6 Sheol is naked before God, and Abaddon has no covering.
Job 26:7 He stretches out the north over empty space, and hangs the earth on nothing.
Job 26:8 He binds up the waters in his thick clouds, and the cloud is not burst under them.
Job 26:9 He encloses the face of his throne, and spreads his cloud on it.
Job 26:10 He has described a boundary on the surface of the waters, and to the confines of light and darkness.
Job 26:11 The pillars of heaven tremble and are astonished at his rebuke.
Job 26:12 He stirs up the sea with his power, and by his understanding he strikes through Rahab.
Job 26:13 By his Spirit the heavens are garnished. His hand has pierced the swift serpent.
Job 26:14 Behold, these are but the outskirts of his ways. How small a whisper do we hear of him! But the thunder of his power who can understand?"

Rom 3:1 Then what advantage does the Jew have? Or what is the profit of circumcision?
Rom 3:2 Much in every way! Because first of all, they were entrusted with the oracles of God.
Rom 3:3 For what if some were without faith? Will their lack of faith nullify the faithfulness of God?
Rom 3:4 May it never be! Yes, let God be found true, but every man a liar. As it is written, "That you might be justified in your words, and might prevail when you come into judgment."
Rom 3:5 But if our unrighteousness commends the righteousness of God, what will we say? Is God unrighteous who inflicts wrath? I speak like men do.
Rom 3:6 May it never be! For then how will God judge the world?
Rom 3:7 For if the truth of God through my lie abounded to his glory, why am I also still judged as a sinner?
Rom 3:8 Why not (as we are slanderously reported, and as some affirm that we say), "Let us do evil, that good may come?" Those who say so are justly condemned.
Rom 3:9 What then? Are we better than they? No, in no way. For we previously warned both Jews and Greeks, that they are all under sin.
Rom 3:10 As it is written, "There is no one righteous; no, not one.
Rom 3:11 There is no one who understands. There is no one who seeks after God.
Rom 3:12 They have all turned aside. They have together become unprofitable. There is no one who does good, no, not, so much as one."
Rom 3:13 "Their throat is an open tomb. With their tongues they have used deceit." "The poison of vipers is under their lips;"
Rom 3:14 "Whose mouth is full of cursing and bitterness."
Rom 3:15 "Their feet are swift to shed blood.
Rom 3:16 Destruction and misery are in their ways.
Rom 3:17 The way of peace, they haven't known."
Rom 3:18 "There is no fear of God before their eyes."
Rom 3:19 Now we know that whatever things the law says, it speaks to those who are under the law, that every mouth may be closed, and all the world may be brought under the judgment of God.
Rom 3:20 Because by the works of the law, no flesh will be justified in his sight. For through the law comes the knowledge of sin.
Rom 3:21 But now apart from the law, a righteousness of God has been revealed, being testified by the law and the prophets;
Rom 3:22 even the righteousness of God through faith in Jesus Christ to all and on all those who believe. For there is no distinction,
Rom 3:23 for all have sinned, and fall short of the glory of God;
Rom 3:24 being justified freely by his grace through the redemption that is in Christ Jesus;
Rom 3:25 whom God set forth to be an atoning sacrifice, through faith in his blood, for a demonstration of his righteousness through the passing over of prior sins, in God's forbearance;
Rom 3:26 to demonstrate his righteousness at this present time; that he might himself be just, and the justifier of him who has faith in Jesus.
Rom 3:27 Where then is the boasting? It is excluded. By what manner of law? Of works? No, but by a law of faith.
Rom 3:28 We maintain therefore that a man is justified by faith apart from the works of the law.
Rom 3:29 Or is God the God of Jews only? Isn't he the God of Gentiles also? Yes, of Gentiles also,
Rom 3:30 since indeed there is one God who will justify the circumcised by faith, and the uncircumcised through faith.
Rom 3:31 Do we then nullify the law through faith? May it never be! No, we establish the law.

"THE EPISTLE TO THE COLOSSIANS" Chapter One by mark Copeland