Love works for RED NECKS too!!!! 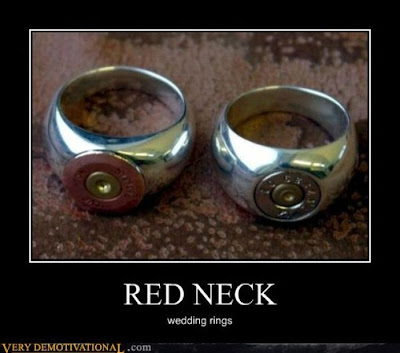 Today Linda and I are celebrating our 44th wedding anniversary.  That is no small accomplishment, considering both sides of our families gave us six months (tops).  There have been good times and not-so-good times, but somehow we have made it this far and look forward to our golden anniversary.  So, it somehow seemed appropriate to refer to Ephesians Chapter five....

22 Wives, be subject to your own husbands, as to the Lord.  23 For the husband is the head of the wife, and Christ also is the head of the assembly, being himself the savior of the body. 24 But as the assembly is subject to Christ, so let the wives also be to their own husbands in everything.  25 Husbands, love your wives, even as Christ also loved the assembly, and gave himself up for it;  26 that he might sanctify it, having cleansed it by the washing of water with the word,  27 that he might present the assembly to himself gloriously, not having spot or wrinkle or any such thing; but that it should be holy and without blemish.  28 Even so husbands also ought to love their own wives as their own bodies. He who loves his own wife loves himself.  29 For no man ever hated his own flesh; but nourishes and cherishes it, even as the Lord also does the assembly;  30 because we are members of his body, of his flesh and bones.  31 “For this cause a man will leave his father and mother, and will be joined to his wife. The two will become one flesh.”  32 This mystery is great, but I speak concerning Christ and of the assembly.  33 Nevertheless each of you must also love his own wife even as himself; and let the wife see that she respects her husband.

At times, it has been very hard for Linda to apply the first three verses; I have had moments of stubbornness over the years.  The rest of the chapter is in my ballpark and at moments has been equally difficult.  I relate very well to the wedding rings, as both Linda and I come from upstate New York farms and were unsophisticated to say the least.  But, its not about your beginnings, its about what you do with what you have.  Love will overlook a lot and make things WORK.  Being a redneck is optional....
Email ThisBlogThis!Share to TwitterShare to FacebookShare to Pinterest

"THE GOSPEL OF MATTHEW" Chapter Sixteen by Mark Copeland