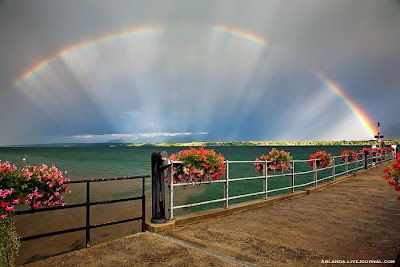 One thing that has greatly surprised me while I have been doing this blog is how much I really love rainbows. I never imagined there were so many variations! This one was new to me as well; it couples Crepuscular rays with with a rainbow. It reminded me of the openings you see when a movie starts, so when I saved the file, I named it "Tada". The "Tada", of course, referring to an important announcement. Immediately, I thought of Luke and the proclamation of Jesus' birth.

Luke 2:1-20 (WEB)
1) Now it happened in those days, that a decree went out from Caesar Augustus that all the world should be enrolled.
2) This was the first enrollment made when Quirinius was governor of Syria.
3) All went to enroll themselves, everyone to his own city.
4) Joseph also went up from Galilee, out of the city of Nazareth, into Judea, to the city of David, which is called Bethlehem, because he was of the house and family of David;
5) to enroll himself with Mary, who was pledged to be married to him as wife, being pregnant.
6) It happened, while they were there, that the day had come that she should give birth.
7) She brought forth her firstborn son, and she wrapped him in bands of cloth, and laid him in a feeding trough, because there was no room for them in the inn.
8) There were shepherds in the same country staying in the field, and keeping watch by night over their flock.
9) Behold, an angel of the Lord stood by them, and the glory of the Lord shone around them, and they were terrified.
10) The angel said to them, “Don’t be afraid, for behold, I bring you good news of great joy which will be to all the people.
11) For there is born to you, this day, in the city of David, a Savior, who is Christ the Lord.
12) This is the sign to you: you will find a baby wrapped in strips of cloth, lying in a feeding trough.”
13) Suddenly, there was with the angel a multitude of the heavenly army praising God, and saying,
14) “Glory to God in the highest, on earth peace, good will toward men.”
15) It happened, when the angels went away from them into the sky, that the shepherds said one to another, “Let’s go to Bethlehem, now, and see this thing that has happened, which the Lord has made known to us.”
16) They came with haste, and found both Mary and Joseph, and the baby was lying in the feeding trough.
17) When they saw it, they publicized widely the saying which was spoken to them about this child.
18) All who heard it wondered at the things which were spoken to them by the shepherds.
19) But Mary kept all these sayings, pondering them in her heart.
20) The shepherds returned, glorifying and praising God for all the things that they had heard and seen, just as it was told them.
(Luke 2:1-20, WEB)

There is no denying that Jesus was and is someone very special!!! The announcement of his birth by an angel is very appropriate and a bit terrifying to the shepherds who heard it. If his birth was important, how much more his death. Where would we be without it? Lost in our sins is the only answer that makes sense to me!!! So, the next time you put in a movie, watch the opening credits and remember that while the beginning is important, its the end that really counts. Thank GOD our lives can have a happy ending; Jesus' life ended in life and that is all I really need to know!!! Oh, yes, and that rainbows are beautiful!
Email ThisBlogThis!Share to TwitterShare to FacebookShare to Pinterest
Newer Posts Older Posts Home
Subscribe to: Posts (Atom)