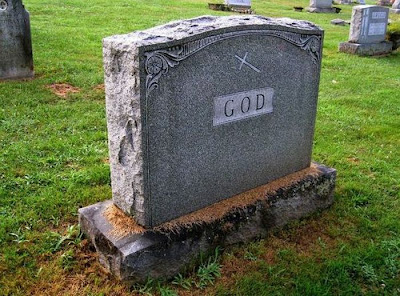 The arrogance of this tombstone is amazing! As if by just putting up a stone someone could declare that the creator of the universe is dead. Beyond arrogance, it is an example of foolishness, an overstatement of a finite being trying to contend with the almighty. Don't agree; well, of course that is your right, but, then you have to explain all the other tombstones in ALL THE OTHER GRAVEYARDS ALL OVER THE WORLD! False ideas about God are nothing new, for even the Apostle Paul had to deal with such things.
1 Cor 1:18-31
18 For the word of the cross is foolishness to those who are dying, but to us who are saved it is the power of God.
19 For it is written, "I will destroy the wisdom of the wise, I will bring the discernment of the discerning to nothing."
20 Where is the wise? Where is the scribe? Where is the lawyer of this world? Hasn't God made foolish the wisdom of this world?
21 For seeing that in the wisdom of God, the world through its wisdom didn't know God, it was God's good pleasure through the foolishness of the preaching to save those who believe.
22 For Jews ask for signs, Greeks seek after wisdom,
23 but we preach Christ crucified; a stumbling block to Jews, and foolishness to Greeks,
24 but to those who are called, both Jews and Greeks, Christ is the power of God and the wisdom of God.
25 Because the foolishness of God is wiser than men, and the weakness of God is stronger than men.
26 For you see your calling, brothers, that not many are wise according to the flesh, not many mighty, and not many noble;
27 but God chose the foolish things of the world that he might put to shame those who are wise. God chose the weak things of the world, that he might put to shame the things that are strong;
28 and God chose the lowly things of the world, and the things that are despised, and the things that are not, that he might bring to nothing the things that are:
29 that no flesh should boast before God.
30 But of him, you are in Christ Jesus, who was made to us wisdom from God, and righteousness and sanctification, and redemption:
31 that, according as it is written, "He who boasts, let him boast in the Lord." WEB
To those who conceive of God as just an idea, consider the word itself. I like to think of it this way: G = Greatness, O = Oneness, D = Divinity. You can put these three letters on a stone all you want but you can't even really comprehend the magnitude of what they stand for. Which, of course is why I classify this tombstone as both foolish and arrogant. When compared to GOD we are nothing and instead of trying to diminish God, we should reflect on our own mortality and THEN begin to try to fathom even the smallest aspect of his nature.
Email ThisBlogThis!Share to TwitterShare to FacebookShare to Pinterest
Newer Posts Older Posts Home
Subscribe to: Posts (Atom)