Do you have enough memory? 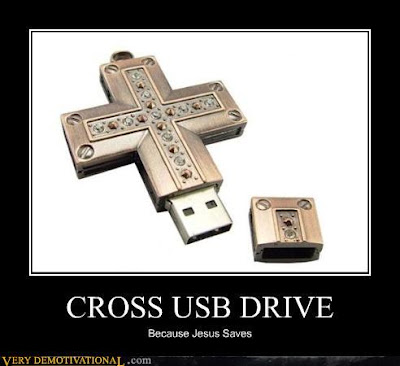 I have seen a lot of USB drives, but never one in the shape of a cross!!!  Whoever put a title on this graphic was obviously answering the question: Why have a USB drive in the shape of a cross?  There is another question associated with his answer of "Because Jesus Saves" and that is "Why should we remember this"?  The answer to this is found in a passage the preacher used in his sermon this morning at church...
WEB: Matthew Chapter 25

[1] "“Then the Kingdom of Heaven will be like ten virgins, who took their lamps, and went out to meet the bridegroom. [2] Five of them were foolish, and five were wise. [3] Those who were foolish, when they took their lamps, took no oil with them, [4] but the wise took oil in their vessels with their lamps. [5] Now while the bridegroom delayed, they all slumbered and slept. [6] But at midnight there was a cry, ‘Behold! The bridegroom is coming! Come out to meet him!’ [7] Then all those virgins arose, and trimmed their lamps. [8] The foolish said to the wise, ‘Give us some of your oil, for our lamps are going out.’ [9] But the wise answered, saying, ‘What if there isn’t enough for us and you? You go rather to those who sell, and buy for yourselves.’ [10] While they went away to buy, the bridegroom came, and those who were ready went in with him to the marriage feast, and the door was shut. [11] Afterward the other virgins also came, saying, ‘Lord, Lord, open to us.’ [12] But he answered, ‘Most certainly I tell you, I don’t know you.’ [13] Watch therefore, for you don’t know the day nor the hour in which the Son of Man is coming.
Be ready; because you don't know when Jesus will return is the answer!!!  Nobody knows what will happen in the next five minutes, let alone today, so be ready for anything!!!  This gadget won't save you, but it is a sign; a way to remember what has been done for those who acknowledge Jesus as the ruler of their lives and actually do everything they can to obey him.  This is more than the passive acceptance that many preach; it is a lifelong commitment to obey!!!  So, be prepared, be faithful and honor God throughout your day... every day.  That's about it; except I wonder how much memory this USB holds, since it appears to be twice the normal size of the standard USB on the market?
Email ThisBlogThis!Share to TwitterShare to FacebookShare to Pinterest

"THE BOOK OF DANIEL" Chapter Ten by Mark Copeland