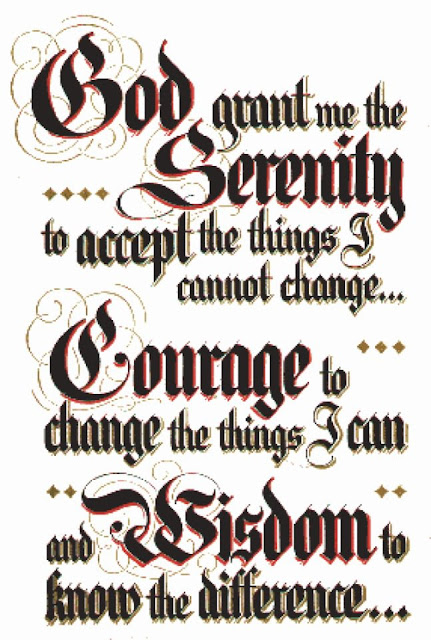 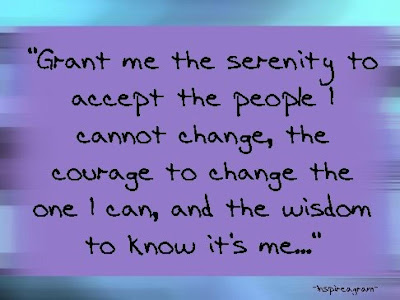 I saw these TWO pictures today and I went into retro mode.  The year was 1981 and I was living in Gloversville, N.Y..  I was a preacher between churches, very discouraged and working at whatever menial work I could find within an area of New York that had a 30% unemployment rate.  I finally found work as a janitor and that is when I met Morris.  He was in his very late fifties (or early sixties) and one of the saddest sacks I have ever met.  But, occasionally, he would open his wallet, look at something and smile.  You guessed it, it was the serenity prayer.  He gave me one sometime later and I kept it with me for many years.  Something happened today that upset me greatly and I was feeling bad; very bad!!!  Then, as I was looking though my collection of pictures, I came across the purple one above.  For me, situations that involve "things" usually present no problem.  It is when they involve others that sometimes I lose it.  I remembered one of my favorite passages from the Scriptures and it helped; it really helped!!!

Philippians, Chapter 4
13 I can do all things through Christ, who strengthens me.

God will help me through anything; even those situations that seem insurmountable!!!!  In reality, if I have a problem, I need to remember that God loves me and will help.  I just need to realize the problem ultimately comes back to me and MY SHORTCOMINGS.  Thank you, God, for helping me once again.  I hope these two pictures and the passage from Philippians help you as well!!!  If they don't... think about it... it will come to you... I PROMISE!!!

2Ch 19:1 Jehoshaphat the king of Judah returned to his house in peace to Jerusalem.
2Ch 19:2 Jehu the son of Hanani the seer went out to meet him, and said to king Jehoshaphat, Should you help the wicked, and love those who hate Yahweh? for this thing wrath is on you from before Yahweh.
2Ch 19:3 Nevertheless there are good things found in you, in that you have put away the Asheroth out of the land, and have set your heart to seek God.
2Ch 19:4 Jehoshaphat lived at Jerusalem: and he went out again among the people from Beersheba to the hill country of Ephraim, and brought them back to Yahweh, the God of their fathers.
2Ch 19:5 He set judges in the land throughout all the fortified cities of Judah, city by city,
2Ch 19:6 and said to the judges, Consider what you do: for you don't judge for man, but for Yahweh; and he is with you in the judgment.
2Ch 19:7 Now therefore let the fear of Yahweh be on you; take heed and do it: for there is no iniquity with Yahweh our God, nor respect of persons, nor taking of bribes.
2Ch 19:8 Moreover in Jerusalem did Jehoshaphat set of the Levites and the priests, and of the heads of the fathers' houses of Israel, for the judgment of Yahweh, and for controversies. They returned to Jerusalem.
2Ch 19:9 He commanded them, saying, Thus you shall do in the fear of Yahweh, faithfully, and with a perfect heart.
2Ch 19:10 Whenever any controversy shall come to you from your brothers who dwell in their cities, between blood and blood, between law and commandment, statutes and ordinances, you shall warn them, that they not be guilty towards Yahweh, and so wrath come on you and on your brothers: this do, and you shall not be guilty.
2Ch 19:11 Behold, Amariah the chief priest is over you in all matters of Yahweh; and Zebadiah the son of Ishmael, the ruler of the house of Judah, in all the king's matters: also the Levites shall be officers before you. Deal courageously, and Yahweh be with the good.

THE SECOND EPISTLE TO THE CORINTHIANS Chapter Ten by Mark Copeland