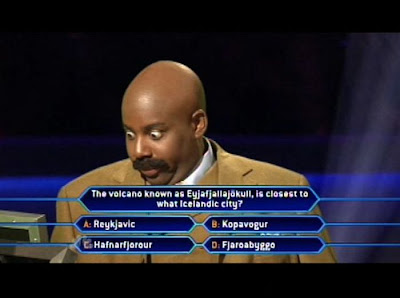 When I saw this picture on the net, I could only think of one thing: "Are you smarter than a 5th grader?". OK, I admit it, I do not know the answer to this one. I don't know what this man was thinking, but when I saw this question, I felt my I.Q. level drop about 40 points or more. The recent volcanic eruption may be news, but I only make the connection as far as that "Scandinavian" country. If I lived closer I might know more, but I don't, so my eyes bulged out too when I saw this simple little question. Even if I did know more than I do right now, I would have to be motivated and willing to listen to do something about it; otherwise I stay right where I am; period! Which is exactly where Felix was when Paul made his defense before him.
Acts 24:22-27 (WEB)
22) But Felix, having more exact knowledge concerning the Way, deferred them, saying, “When Lysias, the commanding officer, comes down, I will decide your case.”
23) He ordered the centurion that Paul should be kept in custody, and should have some privileges, and not to forbid any of his friends to serve him or to visit him.
24) But after some days, Felix came with Drusilla, his wife, who was a Jewess, and sent for Paul, and heard him concerning the faith in Christ Jesus.
25) As he reasoned about righteousness, self-control, and the judgment to come, Felix was terrified, and answered, “Go your way for this time, and when it is convenient for me, I will summon you.”
26) Meanwhile, he also hoped that money would be given to him by Paul, that he might release him. Therefore also he sent for him more often, and talked with him.
27) But when two years were fulfilled, Felix was succeeded by Porcius Festus, and desiring to gain favor with the Jews, Felix left Paul in bonds.

Why do we do the things we do? What motivates us? Fear, peer pressure, family, economics, love, hate and probably a thousand other things might "get us going", but when it comes to God, somehow many of us turn a deaf ear. Felix's "deaf ear" was money and power. Because of these he never acted on his knowledge of "the way", even though he was terrified of the future consequences. Is there a question that really bothers you? How about: If you died tonight, where would you go in the next life? If your eyes just bulged, then perhaps you might want to open your Bible to Acts chapter 2; interesting reading. And, oh, yes, you will find the answer there!!! Next step: You need to do something about it!!!
Email ThisBlogThis!Share to TwitterShare to FacebookShare to Pinterest

It doesn't take an Einstein... 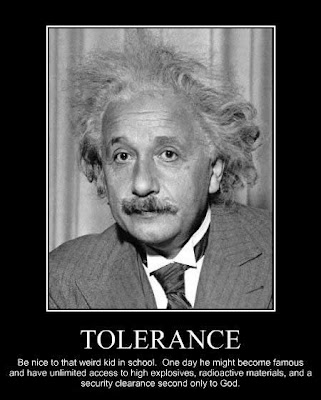 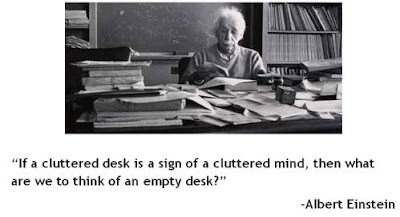 Some time ago, I used to subscribe to the Einstein quote of the day; some were amusing, others insightful, but all of them seemed to make sense to me. Don't misunderstand me, I certainly do not understand all of his theories and for his math--forget it! But for a man who was obviously extremely smart, he had a down-to-Earth quality I have always liked. As I looked at these two pictures, I couldn't help but wonder what he would think of today's society. Look around, things are changing: today I read in the news that a street preacher was arrested for telling a homosexual that God hates him. I don't think the preacher was right. It seems to me that God hates the sin, but still loves the person who sins. Read this passage from the book of Romans and YOU BE THE JUDGE.
Rom 1:13-32 (WEB)
13) Now I don’t desire to have you unaware, brothers, that I often planned to come to you, and was hindered so far, that I might have some fruit among you also, even as among the rest of the Gentiles.
14) I am debtor both to Greeks and to foreigners, both to the wise and to the foolish.
15) So, as much as is in me, I am eager to preach the Good News to you also who are in Rome.
16) For I am not ashamed of the Good News of Christ, for it is the power of God for salvation for everyone who believes; for the Jew first, and also for the Greek.
17) For in it is revealed God’s righteousness from faith to faith. As it is written, “But the righteous shall live by faith.”
18) For the wrath of God is revealed from heaven against all ungodliness and unrighteousness of men, who suppress the truth in unrighteousness,
19) because that which is known of God is revealed in them, for God revealed it to them.
20) For the invisible things of him since the creation of the world are clearly seen, being perceived through the things that are made, even his everlasting power and divinity; that they may be without excuse.
21) Because, knowing God, they didn’t glorify him as God, neither gave thanks, but became vain in their reasoning, and their senseless heart was darkened.
22) Professing themselves to be wise, they became fools,
23) and traded the glory of the incorruptible God for the likeness of an image of corruptible man, and of birds, and four-footed animals, and creeping things.
24) Therefore God also gave them up in the lusts of their hearts to uncleanness, that their bodies should be dishonored among themselves,
25) who exchanged the truth of God for a lie, and worshiped and served the creature rather than the Creator, who is blessed forever. Amen.
26) For this reason, God gave them up to vile passions. For their women changed the natural function into that which is against nature.
27) Likewise also the men, leaving the natural function of the woman, burned in their lust toward one another, men doing what is inappropriate with men, and receiving in themselves the due penalty of their error.
28) Even as they refused to have God in their knowledge, God gave them up to a reprobate mind, to do those things which are not fitting;
29) being filled with all unrighteousness, sexual immorality, wickedness, covetousness, malice; full of envy, murder, strife, deceit, evil habits, secret slanderers,
30) backbiters, hateful to God, insolent, haughty, boastful, inventors of evil things, disobedient to parents,
31) without understanding, covenant breakers, without natural affection, unforgiving, unmerciful;
32) who, knowing the ordinance of God, that those who practice such things are worthy of death, not only do the same, but also approve of those who practice them.

God lets people who practice such things "do their thing". However, there will be consequences. The street preacher made a mistake and put himself into the picture, when he should have just read all or perhaps part of the Romans passage. Anyone listening to God's word would soon get the idea. It doesn't take an Einstein to figure this one out. Now, if I could just put this into an equation....
Email ThisBlogThis!Share to TwitterShare to FacebookShare to Pinterest
Newer Posts Older Posts Home
Subscribe to: Posts (Atom)