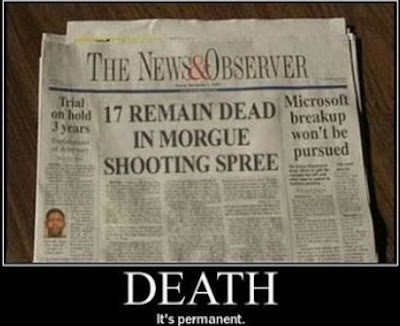 People who die remain dead; obviously the person who wrote this headline meant to say it a little differently. I have not personally seen someone come back to life, but I know it has happened because The Bible tells me it has. However, those who become Christians do so by identifying with Jesus and his death and RESURRECTION. The following passage from the book of Romans tells about this process.
Rom 6:1 What shall we say then? Shall we continue in sin, that grace may abound?
Rom 6:2 May it never be! We who died to sin, how could we live in it any longer?
Rom 6:3 Or don't you know that all we who were baptized into Christ Jesus were baptized into his death?
Rom 6:4 We were buried therefore with him through baptism to death, that just like Christ was raised from the dead through the glory of the Father, so we also might walk in newness of life.
Rom 6:5 For if we have become united with him in the likeness of his death, we will also be part of his resurrection;
Rom 6:6 knowing this, that our old man was crucified with him, that the body of sin might be done away with, so that we would no longer be in bondage to sin.
Rom 6:7 For he who has died has been freed from sin.
Rom 6:8 But if we died with Christ, we believe that we will also live with him;
Rom 6:9 knowing that Christ, being raised from the dead, dies no more. Death no more has dominion over him!
Rom 6:10 For the death that he died, he died to sin one time; but the life that he lives, he lives to God.
Rom 6:11 Thus consider yourselves also to be dead to sin, but alive to God in Christ Jesus our Lord.
World English Bible
Death and taxes; these two things are certain! Just as certain is the fact that Jesus was raised from death. The documentation of his resurrection is incontrovertible. Facts are facts and because this IS true, we who have identified ourselves with him will not stay dead forever. So much for death, now, I wonder what we can do about the tax problem? Does anyone out there have President Obama's cell phone number?
Email ThisBlogThis!Share to TwitterShare to FacebookShare to Pinterest
Newer Posts Older Posts Home
Subscribe to: Posts (Atom)