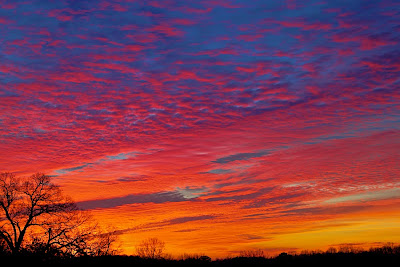 What a beautiful sunset!!!  This unique blend of clouds at different altitudes gives the impression of the whole sky being lit up.  How glorious!!!  I can't recall ever seeing this before.  Yet, how many times have I said that on this blog?  How many different things in this world are unique and worthy of recognition?  The apostle Paul says something similar in his first letter to the Corinthians...
1 Corinthians 15:40-58 (WEB)
40) There are also celestial bodies, and terrestrial bodies; but the glory of the celestial differs from that of the terrestrial.
41) There is one glory of the sun, another glory of the moon, and another glory of the stars; for one star differs from another star in glory.
42) So also is the resurrection of the dead. It is sown in corruption; it is raised in incorruption.
43) It is sown in dishonor; it is raised in glory. It is sown in weakness; it is raised in power.
44) It is sown a natural body; it is raised a spiritual body. There is a natural body and there is also a spiritual body.
45) So also it is written, “The first man, Adam, became a living soul.” The last Adam became a life-giving spirit.
46) However that which is spiritual isn’t first, but that which is natural, then that which is spiritual.
47) The first man is of the earth, made of dust. The second man is the Lord from heaven.
48) As is the one made of dust, such are those who are also made of dust; and as is the heavenly, such are they also that are heavenly.
49) As we have borne the image of those made of dust, let’s also bear the image of the heavenly.
50) Now I say this, brothers, that flesh and blood can’t inherit the Kingdom of God; neither does corruption inherit incorruption.
51) Behold, I tell you a mystery. We will not all sleep, but we will all be changed,
52) in a moment, in the twinkling of an eye, at the last trumpet. For the trumpet will sound, and the dead will be raised incorruptible, and we will be changed.
53) For this corruptible must put on incorruption, and this mortal must put on immortality.
54) But when this corruptible will have put on incorruption, and this mortal will have put on immortality, then what is written will happen: “Death is swallowed up in victory.”
55) “Death, where is your sting? Hades, where is your victory?”
56) The sting of death is sin, and the power of sin is the law.
57) But thanks be to God, who gives us the victory through our Lord Jesus Christ.
58) Therefore, my beloved brothers, be steadfast, immovable, always abounding in the Lord’s work, because you know that your labor is not in vain in the Lord.


The leap from considering our glorious surroundings to the glory that awaits us in the next life may seem like a large one at first, but then, all things have a beginning and an end.  Without the hope of something better awaiting us, how depressing this world would be!!!  But thankfully, Jesus has made a way for something better, something more glorious than any sunset could ever be... eternal life!!!  That thought and the expectation of the beauty that awaits in the life beyond makes life more beautiful in the here and now than any sunset, no matter how marvelous.
Email ThisBlogThis!Share to TwitterShare to FacebookShare to Pinterest

Jun. 11, 12
John 14
Joh 14:1 "Don't let your heart be troubled. Believe in God. Believe also in me.
Joh 14:2 In my Father's house are many homes. If it weren't so, I would have told you. I am going to prepare a place for you.
Joh 14:3 If I go and prepare a place for you, I will come again, and will receive you to myself; that where I am, you may be there also.
Joh 14:4 Where I go, you know, and you know the way."
Joh 14:5 Thomas said to him, "Lord, we don't know where you are going. How can we know the way?"
Joh 14:6 Jesus said to him, "I am the way, the truth, and the life. No one comes to the Father, except through me.
Joh 14:7 If you had known me, you would have known my Father also. From now on, you know him, and have seen him."
Joh 14:8 Philip said to him, "Lord, show us the Father, and that will be enough for us."
Joh 14:9 Jesus said to him, "Have I been with you such a long time, and do you not know me, Philip? He who has seen me has seen the Father. How do you say, 'Show us the Father?'
Joh 14:10 Don't you believe that I am in the Father, and the Father in me? The words that I tell you, I speak not from myself; but the Father who lives in me does his works.
Joh 14:11 Believe me that I am in the Father, and the Father in me; or else believe me for the very works' sake.
Joh 14:12 Most certainly I tell you, he who believes in me, the works that I do, he will do also; and he will do greater works than these, because I am going to my Father.
Joh 14:13 Whatever you will ask in my name, that will I do, that the Father may be glorified in the Son.
Joh 14:14 If you will ask anything in my name, I will do it.
Joh 14:15 If you love me, keep my commandments.
Joh 14:16 I will pray to the Father, and he will give you another Counselor, that he may be with you forever,-
Joh 14:17 the Spirit of truth, whom the world can't receive; for it doesn't see him, neither knows him. You know him, for he lives with you, and will be in you.
Joh 14:18 I will not leave you orphans. I will come to you.
Joh 14:19 Yet a little while, and the world will see me no more; but you will see me. Because I live, you will live also.
Joh 14:20 In that day you will know that I am in my Father, and you in me, and I in you.
Joh 14:21 One who has my commandments, and keeps them, that person is one who loves me. One who loves me will be loved by my Father, and I will love him, and will reveal myself to him."
Joh 14:22 Judas (not Iscariot) said to him, "Lord, what has happened that you are about to reveal yourself to us, and not to the world?"
Joh 14:23 Jesus answered him, "If a man loves me, he will keep my word. My Father will love him, and we will come to him, and make our home with him.
Joh 14:24 He who doesn't love me doesn't keep my words. The word which you hear isn't mine, but the Father's who sent me.
Joh 14:25 I have said these things to you, while still living with you.
Joh 14:26 But the Counselor, the Holy Spirit, whom the Father will send in my name, he will teach you all things, and will remind you of all that I said to you.
Joh 14:27 Peace I leave with you. My peace I give to you; not as the world gives, give I to you. Don't let your heart be troubled, neither let it be fearful.
Joh 14:28 You heard how I told you, 'I go away, and I come to you.' If you loved me, you would have rejoiced, because I said 'I am going to my Father;' for the Father is greater than I.
Joh 14:29 Now I have told you before it happens so that, when it happens, you may believe.
Joh 14:30 I will no more speak much with you, for the prince of the world comes, and he has nothing in me.
Joh 14:31 But that the world may know that I love the Father, and as the Father commanded me, even so I do. Arise, let us go from here.
Email ThisBlogThis!Share to TwitterShare to FacebookShare to Pinterest
Newer Posts Older Posts Home
Subscribe to: Posts (Atom)