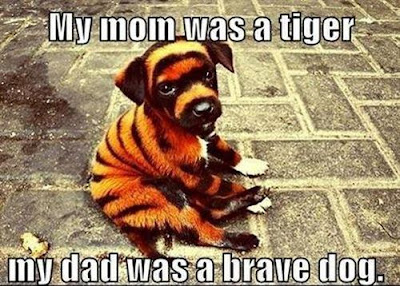 Of course this picture is manipulated, but along with the caption, that's what makes it humorous!!!  If however, it WERE TRUE, imagine the courage of that dog!!!!  Courage is exhibited by all sorts of people and those in leadership want the best possible people around them.  The ancient king of Israel, David, was no exception.  Here is a list of his "mighty men" and if you can get past the difficult names (and they are hard to pronounce) there are some noteworthy people here indeed...
2 Samuel Chapter 23
8 These are the names of the mighty men whom David had: Josheb Basshebeth a Tahchemonite, chief of the captains; the same was Adino the Eznite, against eight hundred slain at one time.  9 After him was Eleazar the son of Dodai the son of an Ahohite, one of the three mighty men with David, when they defied the Philistines who were there gathered together to battle, and the men of Israel were gone away. 10 He arose, and struck the Philistines until his hand was weary, and his hand froze to the sword; and Yahweh worked a great victory that day; and the people returned after him only to take spoil.  11 After him was Shammah the son of Agee a Hararite. The Philistines were gathered together into a troop, where there was a plot of ground full of lentils; and the people fled from the Philistines.  12 But he stood in the midst of the plot, and defended it, and killed the Philistines; and Yahweh worked a great victory.  13 Three of the thirty chief men went down, and came to David in the harvest time to the cave of Adullam; and the troop of the Philistines was encamped in the valley of Rephaim. 14 David was then in the stronghold; and the garrison of the Philistines was then in Bethlehem.  15 David longed, and said, “Oh that one would give me water to drink of the well of Bethlehem, which is by the gate!”  16 The three mighty men broke through the army of the Philistines, and drew water out of the well of Bethlehem, that was by the gate, and took it, and brought it to David: but he would not drink of it, but poured it out to Yahweh.  17 He said, “Be it far from me, Yahweh, that I should do this! Isn’t it the blood of the men who went in jeopardy of their lives?” Therefore he would not drink it. The three mighty men did these things.  18 Abishai, the brother of Joab, the son of Zeruiah, was chief of the three. He lifted up his spear against three hundred and killed them, and had a name among the three.  19 Wasn’t he most honorable of the three? therefore he was made their captain: however he didn’t attain to the three.  20 Benaiah the son of Jehoiada, the son of a valiant man of Kabzeel, who had done mighty deeds, he killed the two sons of Ariel of Moab: he went down also and killed a lion in the midst of a pit in time of snow.  21 He killed an Egyptian, a goodly man: and the Egyptian had a spear in his hand; but he went down to him with a staff, and plucked the spear out of the Egyptian’s hand, and killed him with his own spear.  22 Benaiah the son of Jehoiada did these things, and had a name among the three mighty men.  23 He was more honorable than the thirty, but he didn’t attain to the three. David set him over his guard.  24 Asahel the brother of Joab was one of the thirty; Elhanan the son of Dodo of Bethlehem,  25 Shammah the Harodite, Elika the Harodite,  26 Helez the Paltite, Ira the son of Ikkesh the Tekoite,  27 Abiezer the Anathothite, Mebunnai the Hushathite, 28 Zalmon the Ahohite, Maharai the Netophathite,  29 Heleb the son of Baanah the Netophathite, Ittai the son of Ribai of Gibeah of the children of Benjamin,  30 Benaiah a Pirathonite, Hiddai of the brooks of Gaash. 31 Abialbon the Arbathite, Azmaveth the Barhumite,  32 Eliahba the Shaalbonite, the sons of Jashen, Jonathan,  33 Shammah the Hararite, Ahiam the son of Sharar the Ararite,  34 Eliphelet the son of Ahasbai, the son of the Maacathite, Eliam the son of Ahithophel the Gilonite, 35 Hezro the Carmelite, Paarai the Arbite,  36 Igal the son of Nathan of Zobah, Bani the Gadite,  37 Zelek the Ammonite, Naharai the Beerothite, armor bearers to Joab the son of Zeruiah,  38 Ira the Ithrite, Gareb the Ithrite,  39 Uriah the Hittite: thirty-seven in all.
The first few have stories told of them, while the later ones are listed.  Still, just to be on the list was a great honor.  Every one of these was exemplary or they would not have made the list.  Last of all was Uriah the Hittite and we all know the story of how king David misused his authority and had him killed so he could have Uriah's wife.  You may never do anything OUTSTANDING like these men, but if you have the courage to really look at yourself and change your ways to conform to the will of God, then you have accomplished something that most of the world will never do; namely, have your name written in the book of life and make it into heaven.  That is more important than anything else you could do because it will last forever. And forever is one very long time!!!!
Email ThisBlogThis!Share to TwitterShare to FacebookShare to Pinterest

Act 11:1 Now the apostles and the brothers who were in Judea heard that the Gentiles had also received the word of God.
Act 11:2 When Peter had come up to Jerusalem, those who were of the circumcision contended with him,
Act 11:3 saying, "You went in to uncircumcised men, and ate with them!"
Act 11:4 But Peter began, and explained to them in order, saying,
Act 11:5 "I was in the city of Joppa praying, and in a trance I saw a vision: a certain container descending, like it was a great sheet let down from heaven by four corners. It came as far as me.
Act 11:6 When I had looked intently at it, I considered, and saw the four-footed animals of the earth, wild animals, creeping things, and birds of the sky.
Act 11:7 I also heard a voice saying to me, 'Rise, Peter, kill and eat!'
Act 11:8 But I said, 'Not so, Lord, for nothing unholy or unclean has ever entered into my mouth.'
Act 11:9 But a voice answered me the second time out of heaven, 'What God has cleansed, don't you call unclean.'
Act 11:10 This was done three times, and all were drawn up again into heaven.
Act 11:11 Behold, immediately three men stood before the house where I was, having been sent from Caesarea to me.
Act 11:12 The Spirit told me to go with them, without discriminating. These six brothers also accompanied me, and we entered into the man's house.
Act 11:13 He told us how he had seen the angel standing in his house, and saying to him, 'Send to Joppa, and get Simon, whose surname is Peter,
Act 11:14 who will speak to you words by which you will be saved, you and all your house.'
Act 11:15 As I began to speak, the Holy Spirit fell on them, even as on us at the beginning.
Act 11:16 I remembered the word of the Lord, how he said, 'John indeed baptized in water, but you will be baptized in the Holy Spirit.'
Act 11:17 If then God gave to them the same gift as us, when we believed in the Lord Jesus Christ, who was I, that I could withstand God?"
Act 11:18 When they heard these things, they held their peace, and glorified God, saying, "Then God has also granted to the Gentiles repentance to life!"
Act 11:19 They therefore who were scattered abroad by the oppression that arose about Stephen traveled as far as Phoenicia, Cyprus, and Antioch, speaking the word to no one except to Jews only.
Act 11:20 But there were some of them, men of Cyprus and Cyrene, who, when they had come to Antioch, spoke to the Hellenists, preaching the Lord Jesus.
Act 11:21 The hand of the Lord was with them, and a great number believed and turned to the Lord.
Act 11:22 The report concerning them came to the ears of the assembly which was in Jerusalem. They sent out Barnabas to go as far as Antioch,
Act 11:23 who, when he had come, and had seen the grace of God, was glad. He exhorted them all, that with purpose of heart they should remain near to the Lord.
Act 11:24 For he was a good man, and full of the Holy Spirit and of faith, and many people were added to the Lord.
Act 11:25 Barnabas went out to Tarsus to look for Saul.
Act 11:26 When he had found him, he brought him to Antioch. It happened, that for a whole year they were gathered together with the assembly, and taught many people. The disciples were first called Christians in Antioch.
Act 11:27 Now in these days, prophets came down from Jerusalem to Antioch.
Act 11:28 One of them named Agabus stood up, and indicated by the Spirit that there should be a great famine all over the world, which also happened in the days of Claudius.
Act 11:29 As any of the disciples had plenty, each determined to send relief to the brothers who lived in Judea;
Act 11:30 which they also did, sending it to the elders by the hands of Barnabas and Saul.

"THE FIRST EPISTLE TO THE CORINTHIANS" Chapter Fourteen by Mark Copeland