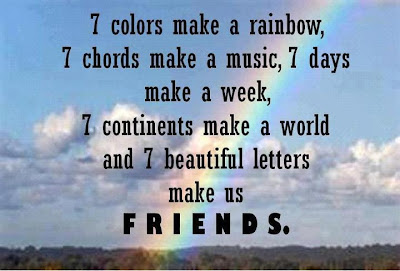 For the vast majority of us, New Years day is a holiday!  The 1st day of a brand new year is something to remember!!!  And when I thought about it, naturally I began to think about numbers- and then I found this picture in my collection.  It combines rainbows, numbers and friends in a beautiful way. Since I just finished the book of Revelation the other day, naturally this passage was in the forefront of my thinking...

Revelation, Chapter 21
10 He carried me away in the Spirit to a great and high mountain, and showed me the holy city, Jerusalem, coming down out of heaven from God,  11 having the glory of God. Her light was like a most precious stone, as if it were a jasper stone, clear as crystal;  12 having a great and high wall; having twelve gates, and at the gates twelve angels; and names written on them, which are the names of the twelve tribes of the children of Israel.  13 On the east were three gates; and on the north three gates; and on the south three gates; and on the west three gates.  14 The wall of the city had twelve foundations, and on them twelve names of the twelve Apostles of the Lamb.  15 He who spoke with me had for a measure, a golden reed, to measure the city, its gates, and its walls.  16 The city is square, and its length is as great as its breadth. He measured the city with the reed, Twelve thousand twelve stadia. Its length, breadth, and height are equal.  17 Its wall is one hundred forty-four cubits, by the measure of a man, that is, of an angel.  18 The construction of its wall was jasper. The city was pure gold, like pure glass.  19 The foundations of the city’s wall were adorned with all kinds of precious stones. The first foundation was jasper; the second, sapphire; the third, chalcedony; the fourth, emerald;  20 the fifth, sardonyx; the sixth, sardius; the seventh, chrysolite; the eighth, beryl; the ninth, topaz; the tenth, chrysoprasus; the eleventh, jacinth; and the twelfth, amethyst.  21 The twelve gates were twelve pearls. Each one of the gates was made of one pearl. The street of the city was pure gold, like transparent glass.  22 I saw no temple in it, for the Lord God, the Almighty, and the Lamb, are its temple.  23 The city has no need for the sun, neither of the moon, to shine, for the very glory of God illuminated it, and its lamp is the Lamb.  24 The nations will walk in its light. The kings of the earth bring the glory and honor of the nations into it.  25 Its gates will in no way be shut by day (for there will be no night there),  26 and they shall bring the glory and the honor of the nations into it so that they may enter.  27 There will in no way enter into it anything profane, or one who causes an abomination or a lie, but only those who are written in the Lamb’s book of life.
So, put together we have a marvellous composite: Numbers, rainbows, friends and heaven.  What a wonderful way to begin a new year!!! Especially if you think about the number seven, which is a combination of the number for God (3) and the number for the world (4).  A new world, with God in it and all my friends as well.  Wow!!!  By the way, in case you are wondering about all those stones in the wall- click on the link below for some interesting information!!!
The Twelve Stones Of The Apocalypse
HAPPY NEW YEAR AND MY GOD BLESS YOU ALL!!!